Share All sharing options for: Inter 3 - 0 Reggina: 20 Points and Counting 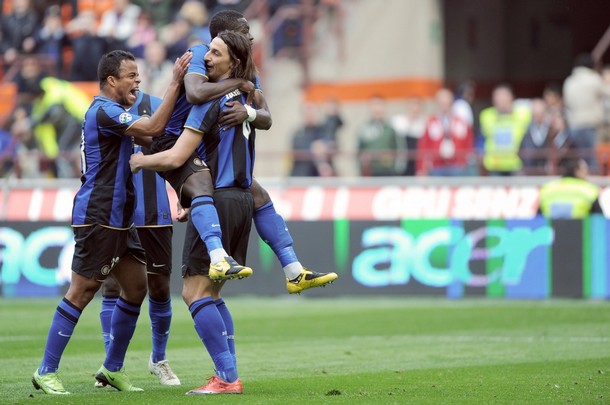 Despite a slippery pitch and only one central defender on the squad (and a third string one to boot), Inter managed to hold on to their seven-point lead at the top of the table. Thanks to a set-piece goal from Cambiasso, a brace from Ibra, and yet more heroics from Julio Cesar, we took a full three points while keeping our offensive and defensive records intact. It wasn't always pretty - Cambiasso and Rivas are not an ideal pairing for central defense - but our game was effective. With this win, we are 20 points from our main objective: Inter's 17th scudetto (although I still say 21 points).

First of all, for those who did not get to see the game, our would like to refresh thier memories, here are the highlights:

With Adriano and all but one central defender unavailable, Mourinho had to switch things up a bit. He started with a 4-2-3-1, with Zanetti and Stankovic helping the defense (boy did we need it), Balotelli flanked by Ibra and Muntari, and Mancini in front. 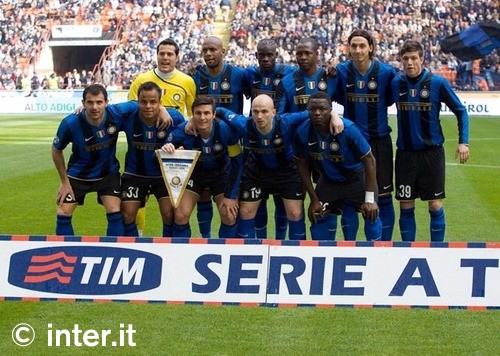 Nice to see Mancini on the field for a change. (Note: no Vieira, Dave!)

Things began quickly as Brienza tested Julio Cesar in the second minute. Inter replied with set-piece goal from Cambiasso. It is his second of the season, and, as he has renewed his contract with Inter until 2014, I am sure there will be many more to come. 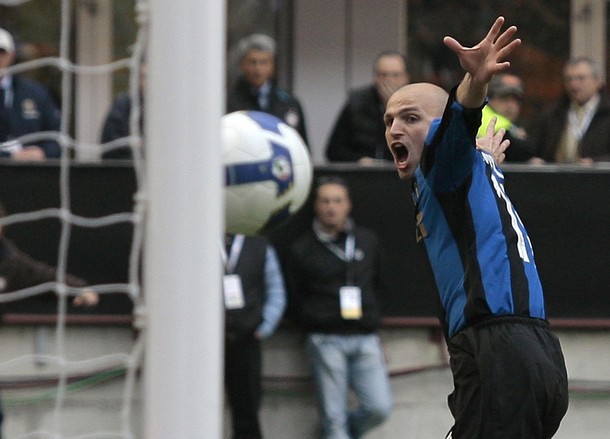 GOAL! Cambiasso beats the offside trap and gets his name on the score sheet!

Reggina got a bit stroppy after the goal and the fouls started flying. Four minutes after Inter's first goal, Reggina defender Valdez caught Mancini in the box and Mazzoleni awarded a penalty. Ibra stepped up to the ball and slotted it home. Ten minutes in and Inter were already up two. Of course, we were also up 2-0 early in the first half when we played Reggina at the Granillo and look how that turned out. This game was by no means over. 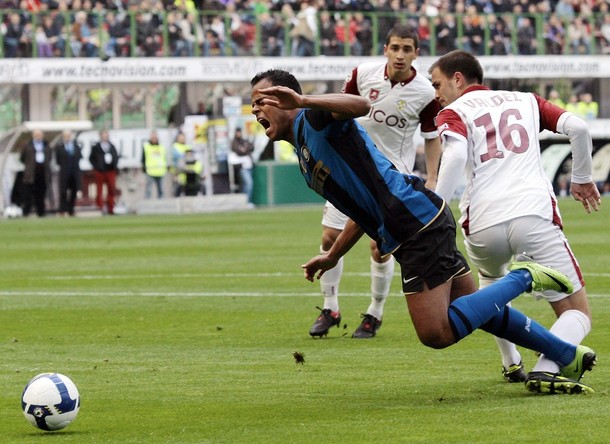 Mancini gets taken down... 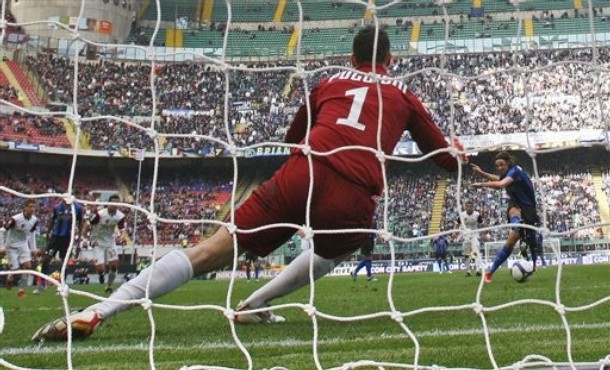 ... and Ibra converts the penalty.

I suppose we could have dropped back and tried to defend the lead for 80 minutes, but no, we kept the pressure on Reggina, looking for a third. In the space of a minute Ibra shanked one goal (the ball rolled over his foot) then hit the post with another. Reggina took their ire out on Balotelli (I think he is still our most fouled player) and conceded a couple very dangerous free kicks on the edge of their box. One did not get past the wall, the other was a victim of the terrible, horrible, killer pitch at the San Siro. Ibra slipped just as he was taking the shot and the chance was wasted.

Not happy with just foiling our free-kicks, the pitch decided to start taking out the players. Mancini was actually having a pretty good game - Mourinho may have found a position that will actually work for him in the squad - then, as he was trying to turn with the ball, he slipped and looks to have pulled something. He had to be taken off and Obinna came on in his place. Hopefully it is not too serious and he can recover over the break.

Reggina were not entirely pinned back, and managed to break out for a couple dangerous runs at goal. Cozza hit side netting and Barillà managed to get through our defense with only Julio Cesar to beat. Julio Cesar shut him down, but only because he is the dreamiest, yummiest, stoppingest keeper around. And didn't he look fabulous in his springtime yellow kit? I love Julio Cesar.

Il Bambino Santon managed to pick up a yellow in the second half for a tactical foul on Brienza (his second in as many games). It wasn't pretty and I hope Davide is not picking up some bad habits. Soon after, Reggina get a free kick on their own half - which they take horribly. Stankovic picks up the ball at the halfway line, passes to Ibra who then runs past four Reggina defenders and delicately chips Puggioni for his 19th Serie A goal. It was beautiful. 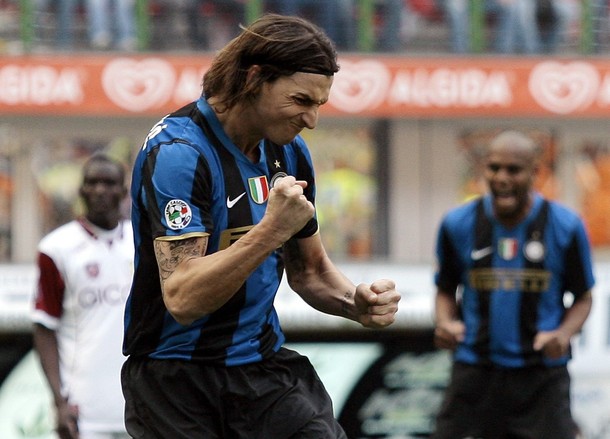 And a second for Ibra. That makes 19 for the league - and still 9 games to go.

This third goal seemed to wake Reggina up and they came gunning for a goal. The next 10 minutes really showed the horror of having Cambiasso as a central defender. I know he did his best - and it was an admirable job - but Cuchu is a midfielder and, in some instances, it showed. First, he missed a clearance, perfectly setting up Reggina midfielder Barilla and forcing Julio Cesar into a diving save. Lanzaro (Reggina's right back) gets a hold of the rebound and takes another shot at goal. Cambiasso misses the clearance again, only this time while effectively blocking JC's view of the ball. Once again, luckily Julio Cesar is fan-freaking-tastic 'cause he managed to get down and parry the shot out of play. Did I mention? I love Julio Cesar! 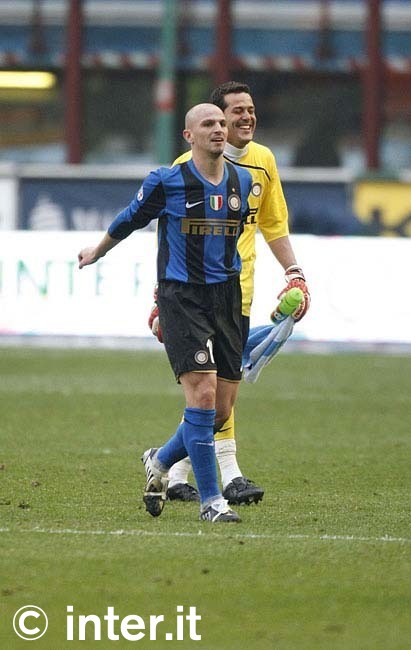 JC all smiles after a quick "sorry" from Cambiasso.

The last twenty or so minutes play out with some end-to-end action, a brief appearance by Jimenez (who comes on for Stankovic then has to come off himself 10 minutes later), and a few minutes for Maxwell. Reggina wanted a penalty as Santos went down in the box, but Mazzoleni would have none of it. I think Santos just hammed it up a bit too much, making a perfectly real foul look like a flop.

After this, Reggina just got a bit nasty, with angry fouls on Balotelli and Santon, and a worrying episode with Ibra and his knee. Really, by the time the 80th minute came around, I just wanted the game to be over. Three up, clean sheet, and two players already off injured... I was done. I watched the last ten minutes through my fingers. Julio Cesar was forced into three more incredible saves then the referee must have felt my pain because there was no added injury time. Whew.

In the end, I was quite impressed with Balotelli, although he still seems to be taking fouls a bit too personally. Cambiasso did an admirable job in defense, but Zanetti did spend quite a bit of time back there helping out. Mancini was having a great game and I was sorry to see him go. Muntari started out well, but then his touch began to let him down towards the end of the match. Rivas did not suck! Maybe he will work out after all. Really, everyone played a pretty good to darn good match. This game made me feel a bit more confident about the rest of the season.

Does this mean we have to call him DOCTOR Mourinho now? 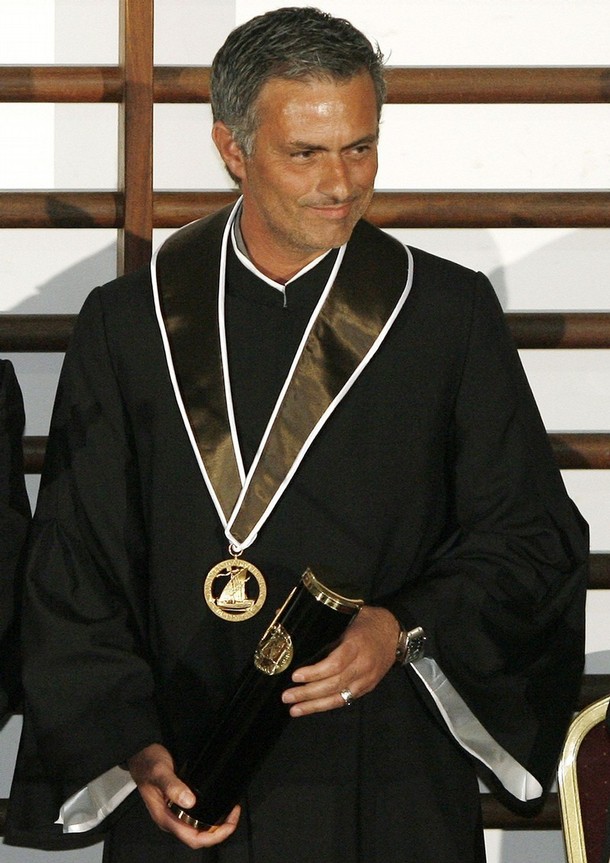