Time to Take This Championship By the Horns

Share All sharing options for: Time to Take This Championship By the Horns 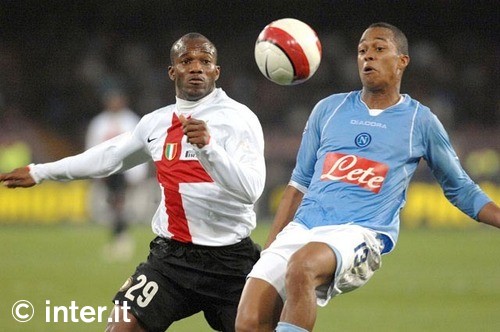 Here we are, just 8 or 9 points shy of our 17th Scudetto. Now is the time to really step up and finish this thing off. Unfortunately, we did not take full points against Juve last week, though we really should have. We are still 10 points up but, as Mourinho points out, we must assume that Milan and Juve will win the rest of their games - we cannot expect any gifts from them. Even though Napoli has been in a bit of slump this year with something like 14 games without a win, we must approach this game with full concentration and desire to finally put this championship away. Last Thursday we "played for fun"; this game it is back to work.

I think we all remember what happened last year: Napoli handed us our first league loss of the season. Here are the highlights for the masochistic out there: 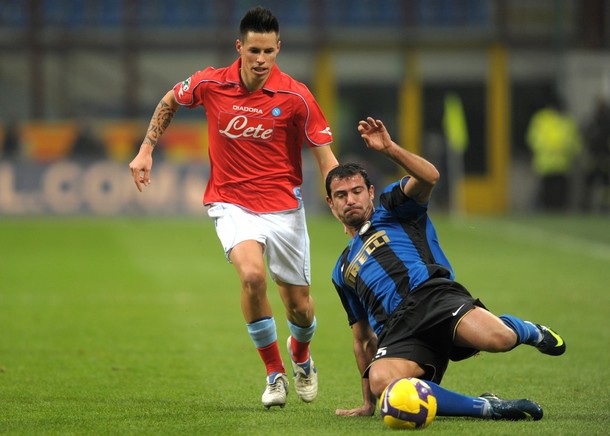 Hamsik is one tricky so and so.

Once again, I dont have to do much here. Neil does a great job, so if you are looking for a Napoli point of view, go check out his preview.

Cannavaro is suspeneded. Gargano, Maggio, Iezzo, Rinaudo, and Vitale are out die to injury, while Santacroce recently took a knock to his ankle and may not be 100% fit. Napoli has any number of players that can cause trouble for Inter, though, and this game is by no means in the bag. 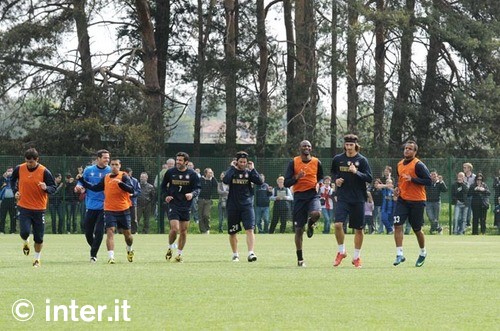 The squad looks up for it.

Mourinho summed it up nicely when he said: "We have to play this game with confidence, but with ambition, the ambition of winning the Scudetto as soon as possible and win the 8, 9 points we need."

First off, Muntari is injured. He was subbed off against Juve and has not been called up for this game. Instead, we have the very frightening prospect of Patrick Vieira (!) taking the pitch tomorrow. I think we call all agree that his time is over. I just wish he would do the honorable thing and retire. Mancini is back in the call-up list and, after his performance against Reggina, that may not be a bad thing.

"It is easy to see who will play: Samuel, Figo and Stankovic who have not played the last match against Sampdoria and are less tired than the other. Muntari will be unavailable, and if your question is whether to show Zanetti in midfield or as a fullback, this is not a doubt for me, but it will remain for you"

Ok, how about this then:

or something like that. I think it is also possible that Mancini will get a bit of a run out. By all accounts, Cordoba had a bit of a stinker against Samp, so we may also get to see a bit of Marco. He may not be the best defender we have, but according to the fans, he played better than both Burdisso or Cordoba on Thursday. 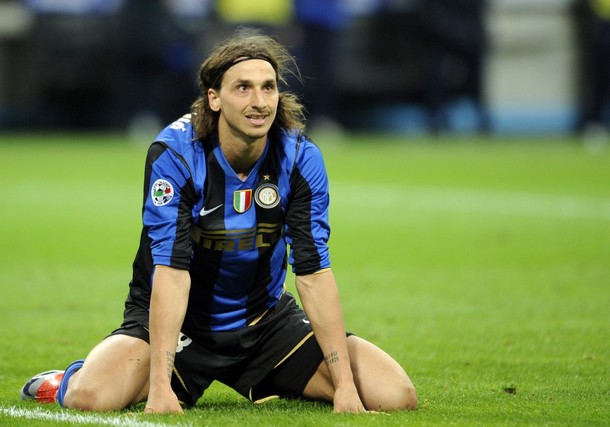 Ibra wants new challenges, does he? How about the challenge of scoring more than one goal in the Champions League next year!

A good third of Mourinho's press conference to day was about Ibra and his supposed admission that he wants to leave Inter. Mourinho pointed out that all Ibra said is that one day he would like new challenges - which is not to say that he wants them right now. Mourinho thinks this is statement has been blown out of proportion by the press and that Ibra will be at Inter next year. Of course, that and $2 will buy you a cup of coffee - there is just no saying what will happen come the summer. On the up side, if he does go, he will fetch a tidy sum for the club.

For now, though, Ibra plays for Inter. He is tied with Marco DiVaio for the capocanonieri today, but as both Bologna and Inter play tomorrow, Ibra may be playing catch-up. I think that this title is something Ibra wants, and wants badly. I am looking to him to score at least one tomorrow. Balotelli has had a couple of good games and may also be ready to add at least one more to his tally. His goal against Juve was magic (and what an assist from Muntari!). Inter may have said goodbye to one Emperor, but it could be we have another waiting in the wings.

For those of you who dont read the Italian version of the Inter web page, the city of Naples has given Balotelli an official welcome to the city and a plaque reading: "With esteem, affection and friendship, to Mario Balotelli for a long and important career also with the colors Italy." 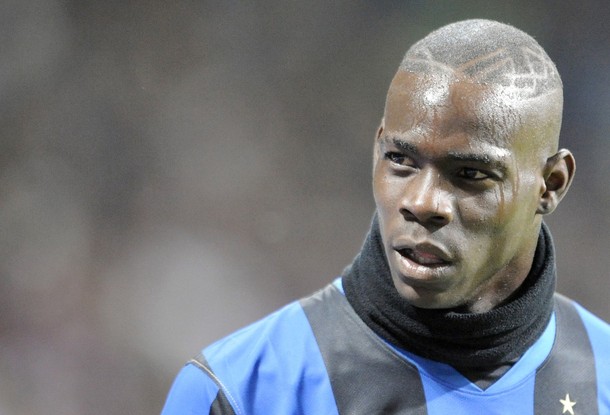 It will be interesting to see how the Napoli fans react to Balotelli tomorrow. The FIGC seems to be taking a hard line over the issue of racist chanting - even if it is supposedly done for non-racist reasons. You would think the ultras would smarten up a bit. If all they are trying to do is wind Balotelli up, you would think they could find a different way to do it. My opinion is that the chanting stems from a bit of column A and B: the fans dont like Balotelli's attitude/showboating, but I think they are also uncomfortable with the idea of a black Italian. As a culture, Italians are a xenophobic lot and I think the reality of Balotelli is much different that that of Sissoko, Vieira, or even Ferrari. Balotelli personifies change and I think that scares a lot of people. I dont think people dislike him because he is black, but because he challenges their notion about what it is to be Italian in the twenty first century, something foreign players do not. Once he starts scoring goals for the Azzurri, though, everyone will love him.

Napoli is desperate to show that they are still a team with promise. They have not officially won a game since January 11th and will be hungry for blood (unofficially, they won that game against Milan). Donadoni will be looking to show he can field a winning team and what better team to do it against than the reigning Italian Champions. Napoli will be looking to score - they are a young team who play fast. Hamsik is particularly dangerous in the air. Inter will need all their wits about them to pull this off. When Napoli came to Milan, the game ended 2-1; I would be more than happy with a repeat of that scoreline (although 2-0 would be better!). Oh, and lets go Palermo and Reggina!

Ok, I admit that Cassano is a great football player, but this scares me. 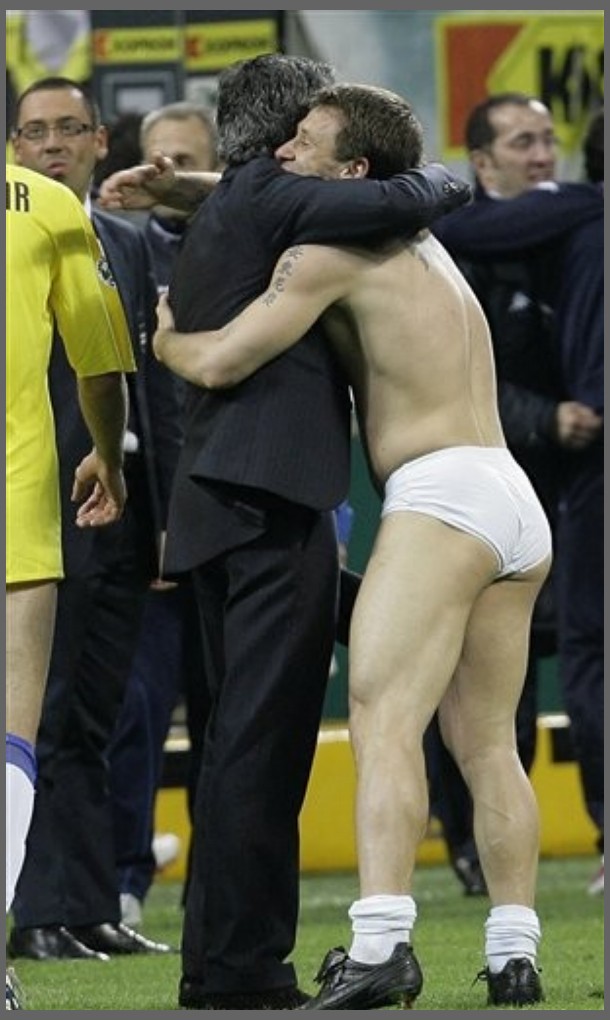