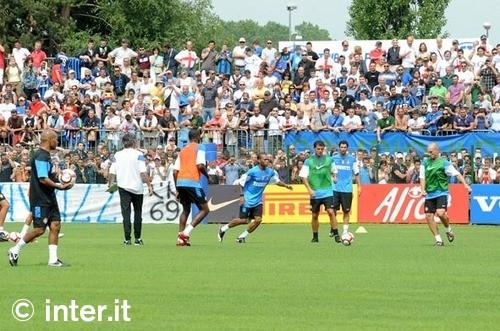 After a few weeks of much needed rest and relaxation preparations are finally underway for the new 2009/2010 season. Most of the squad will begin training today or Saturday, while a few more will meet the team in Los Angeles on Monday. As expected, Mourinho began with a press conference - an it was a doozy. Glad to see he still says exactly what he is thinking. Yep, no weasel words here. Once again, we find out that even though he may be special, he is no magician. Oh, and any talk of Pavel Nedved (or maybe Cassano?) is downright gay.

The main themes of this press conference were:

Mourinho began right in with the controversy, explaining that the squad is too large and there are players currently on the squad that he does not want. Worse yet, those players know they are not wanted but refuse to go, and, purely for legal reasons, the club must respect their contract. But, if they think they will start ahead of the youth he is trying to integrate into the team, then they are wrong (Vieira, Mancini, I think he is looking at you two). He then added that the market is open until Augest 31st and the door swings both ways: in and out.

Mourinho did seem a little perplexed over Inter's market so far. Apparently, he thought everyone was on the same page: lose 8 surplus players (which did not include Quaresma) and bring 4 new ones (central defender, midfielder, attacking midfielder, and forward). So far, we have managed to do exactly half of that: four players have left and two have come.

As for those who have come back from loan, Mourinho seems keen to give Quaresma and Suazo a second chance. About Suazo he said:

Suazo is a player that can be useful in the last 20 or 30 minutes of play, that is fast and can also be dangerous in counterattack. Moreover, he is a good boy and does not create any kind of problem, and I am happy to have him. He will be the fourth between the attackers and without Crespo and Cruz, who last year were often on the bench and then take over a game in progress, Suazo will be useful.

So, not a starter but definitely on the roster. Quaresma, he feels, rates a second chance because the player he saw at Inter is not the one he knew from Portugal. Mourinho is going to give Ricky the chance to find that other, good player. I get the definite impression, though, that if Ricky cannot find his form during the pre-season, he will be shown that swinging door.

Then things got a bit strange. One of the reporters asked if it was possible that Mourinho would be taking a new player with him to the United States, perhaps a blond player (Nedved? Cassano?). Mourinho said no but the reporter kept pressing:

It is a matter of time or because you dont like a blond player?
"I think this is a conversation between gays. One blond, one dark brown, if you have trequaisrtista or a quality central defender that will be perfect, but I think that it will not be so because the players of quality are very difficult to have. We can not spend and spend without having money coming in and for this reason, I am tranquil, I am not critical, I am not angry or disappointed with what the company has made. Simply, I have one team and a roster that was not the roster of my dreams two months ago, however it is reality. I must work in reality and the goals of the team will be adapted to the reality of the team."

Ouch. He is not disappointed but this is not the squad of his dreams. That hurts a bit. And it isn't just midfielders that are causing him problems. No, we also have difficulties in defense:

"I think our central defenders will be the same as last year. It seems that no one will leave, but the market is open until August 31. All things are possible. I am methodologically and psychologically prepared to have the same central defenders I have played last season, with their mentality and their problems. This year I will have the advantage of knowing them better. When, at the end of the championship, I said that I wanted to improve the quality of the construction of the game from behind. I like to play higher, with a fast player who is able to be comfortable with a higher defensive line. These features are part of the player that I like to have in that role. I will not play like that." 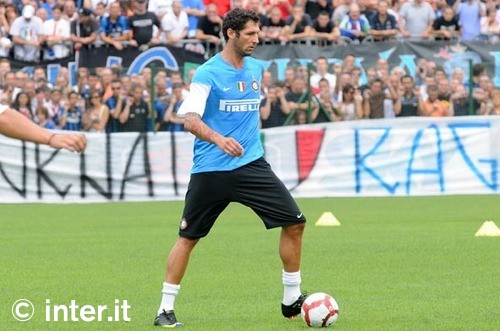 Marco may not be Mou's dream defender, but I still like him,

And when talk finally came around to the champions league, Mou admitted that:

"... in terms of quality we are not in this moment at the same level as the other important squads that compete in this tournament. Can we win? Yes, because it is a competition of details and sometimes the details can be your friend. "

And I have to agree. Right now, we all have to cross our fingers and hope that Quaresma finds his groove and the youth players all turn out to be prodigies. This squad, as it stands today, is precariously balanced: signing one or two great players could tip us towards success, but if our gambles with the youth sector fail, we could just as easily fall into the pit of despair. But I am trying to keep a positive attitude.

Santon has signed a new 5-year contract with Inter. On his last contract, he was making 200,000 euro a season. Under this new contract, he will make 1 million Euro. Apparently, the club would like to keep him.

For his part, he seems excited to be starting the new season. He would like to earn a starting place on the squad, score his first goal for inter, win the Champions League, then play in the World Cup. I think he has his work cut out for him.

Ok, I think that is enough for today. Mou has given us lots to think about and I think there will be more tomorrow.

Ooooo, Look at the baby keeper! Isn't he just cute as a bugs ear? 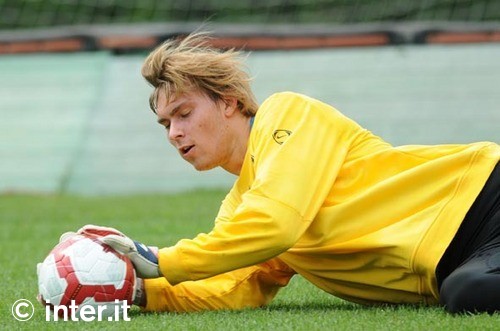