Why does this guy matter?

Share All sharing options for: Why does this guy matter? 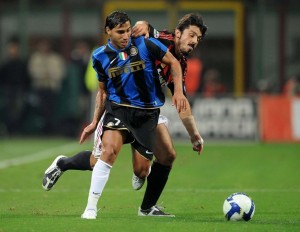 No, not the old animal who, almost Juventus like, can't get a call against despite learning in the technical and prestigious (read: thug capital of the world) Scottish "Premier" League.

It's good to be the Prime Minister's dog...

I was actually talking about the other guy.

This transfer season, for those who are not called Real Madrid, has gone slow at the top. Outside of settling part-ownerships and loans, only Inter and Juventus have made significant signings of the Italian top three. Of the European bound not called Inter and Juventus the only other player this mercato is Genoa, who sold their two top guys for shopping money before they were able to go to the mall.

Inter has invested this past half decade in its youth system like never before as contributors here have said – to provide future players and future bargaining chips to lower actual cash expenditure. Moratti has come out and said that for the right price, no one is unsellable and he expects to lower the wage bill significantly in an effort to save during the current poor financial environment.

Stepping away from the business end of the team, Mourinho has been encouraging the youth push. He’s come out and said that the current team is older than he is used to working with and that he is on the same page with the owner for the current transfer policy – although that Mourinho charm seems to have worked its magic on the front office. We can expect to get younger and use the youth program to fill the roster. We have seen the fruits of this policy, which I personally think is a good one if a bit slow, as Figo, Crespo and Cruz three of our oldest players say goodbye and significantly younger – if not exactly young – players take their place.

So we need an injection of youth. And we need smart investment.

All of which brings us to young Ricky Quaresma.

Ricky is still relatively young, he’ll be 26 at the beginning of the season, and he represents a sizable investment. Depending on who you talk to, he cost between 22 – 30 million Euros (It was actually 18, those who hate Inter will increase the fee to exaggerate the size of his flop) + 20 year old Pele, who made exactly 2 appearances for Porto last year, and was such a star for them that he has since been loaned to Genoa.

Quaresma symbolizes a lot of different things to different people. To our enemies he’s proof that we are fallible. To the media he’s a joke. To the media that belongs to our enemies he’s a talking point as they commit an act of "Intellectual Prostitution". To us Inter supporters he’s both hope and disappointment. To Mourinho, he’s a piece that last year failed to let us be more versatile tactically. And to Inter, he’s…

Well, we don’t know yet, do we? He’s, once again the big question of this mercato. We seem to know what we are getting with these other mainstream purchases – a prolific Serie A/La Liga scorer and a midfielder with possible health issues but otherwise proven by fire.

Before we get too much into this, there are 2 points to remember:

1. He made 19 appearances out of 30+ games (Serie A and Champions League) from
Sept – Feb. and we didn’t do so poorly in that time span.

2. It could be argued pretty well that we did better without him on the team.

So let’s say that he wows everyone with his renewed enthusiasm to play and blows the competition away. Where does he fit in? 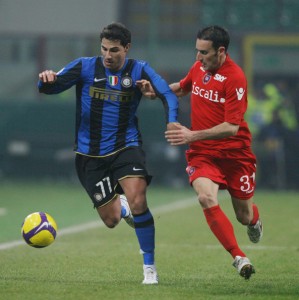 Well, he’s an outside attacking player, so he either plays on the wing of a flat 442 – which we don’t really use, one of the attacking outside midfielder of a 4321 or one of the outside forwards in a 433 - the latter two formations we have definitely used in the past season. Ricky’s competition for playing time in the above formations would be Mario, Motta, Mancini and Meki… er Deki.

This is the year for Quaresma. It can be said that he came in very late last season – in September if I am not mistaken – from Portugal where it had been rumored he was not training well in anticipation of his transfer. I personally don’t really buy into that too much, but I can see how that would mess someone up for a while - maybe not a whole season, but a while. However, like some other members of this team, this is a put up or shut up year for Quaresma.