This week we welcome a new member of the Inter family, Lucimar Ferreira da Silva. That’s him down there. 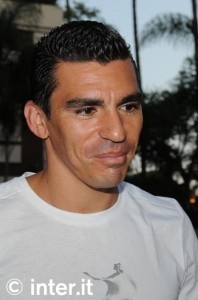 Lucio is currently the captain and starting centerback of the Brazilian National Team. He was formerly the starting Center Back for Bayer Leverkusen and Bayern Monaco (Otherwise known as Bayern Munchen or Bayern Munich for those who missed this gem of an exchange: “As for Lo Monaco I do not know who he is. With the name Monaco I have heard of Bayern Monaco and the Monaco GP, the Tibetan Monaco, and the Principality of Monaco. I have never heard of any others.”)

Lucio has decided to throw his lot with us for the low, low price of 5 million Euros. 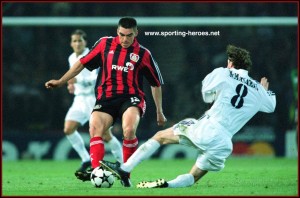 Lucio had been a starter on Bayer Leverkusen from 2001, when he was 23 years old, until 2004. Highlights of his stay in Leverkusen include scoring in the Champions League Finals versus Galaticos 1.0. He played over 90 games and scored 15 goals in the Bundesliga. He added 22 more games and 3 more goals in Europe.

In 2004, when he was 26, he joined Bayern Monaco. In his 5 years with Monaco he played 144 games in the Bundesliga and scored 7 times. He added 45 more games in Europe and scored 4 more times for Monaco. He was recently named Vice-Captain.

He played every minute of every game Brazil played in the 2002 World Cup. In 2006, as most of you know Brazil lost to France in a 1-0 quarter final game.

His trophy cabinet is pretty full as well. He has a World Cup, 3 Bundesliga Championships a brace of Confederations Cups, 3 DFB Cups and 3 DFB Supercups.

Okay, now that we have his CV down, I think we can say that he’s certainly qualified. To reiterate the question in the title, what is his purpose? 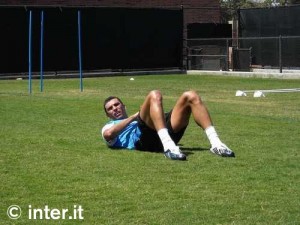 His purpose is not to play “hard man” Walter Samuel defense, although he can certainly do that if he needs to. If that were the only reason to go after him, then we could have gotten lots of guys to do that. The reason we went after Lucio is because he can carry the ball forward and play in between the “bands” as Mourinho puts it.

If one were to draw up the traditional line up of a football team on paper, you would have a defensive line, a midfield line and a forward line. Mourinho’s ideas center on playing and pressuring the ball in between the traditional positions or “bands”. For example, everybody on earth can tell you that Mourinoho favors a 4-3-3. But he doesn’t really. He really favors playing different formations based on whether his team has the ball or not. For example, on attack the 4-3-3 could become the 2-1-3-4 or the 4-3-2-1 on defense.

And Lucio really plays in between the defensive “bands” and the midfield “bands” in kind of the same way that Mario really plays in between the midfield and the forwards. He plays a little higher up on defense – perfect for collecting those through balls and lobs to attacking players making runs in those spaces that exist in traditional formations. He can also bring the ball forward a bit. So, theoretically, the attacking play for our team starts further up the pitch and hopefully negates a lot of our forwards having to come back too far to get the ball. 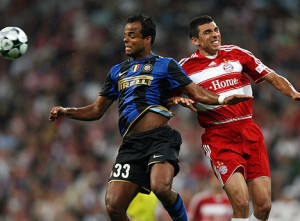 Is Lucio perfect? No, by the very nature of his position he often has to confront attacking players who are attacking in space. We all should know by now that attacking players like space to work in and defensive players try like hell to limit the space of attacking players. So, since he’s working in space he’s going to get burned sometimes. That’s the nature of playing a high line – ask Juventus last season. The idea is that there is going to be cover, but nothing is perfect. The gamble is that he’ll clean up those troublesome through balls – more than let through and hurt us, anyway – and then launch the counter attack.

So, in practical terms, whose spot does he take? He should be in a rotation with Samuel, Chivu and Cordoba. He’s a better Center Back than Burdisso and probably more mobile than Materazzi – who he shares a lot of characteristics with, in my opinion. He also has a nice mean streak when his tail is up and he can be pretty ruthless when the occasion calls for it.

So welcome Lucio, I hope that he can form good partnerships with the other defensemen and hasten the departure of Rivas and Burdisso.

Marco, this is Lucio, your future teammate...

Did I mention a mean streak?