Goodbye Ibra or: How I learned to Stop Worrying and Love the Bomb

Share All sharing options for: Goodbye Ibra or: How I learned to Stop Worrying and Love the Bomb

iacta alea est - There is nothing left but the ink on paper. 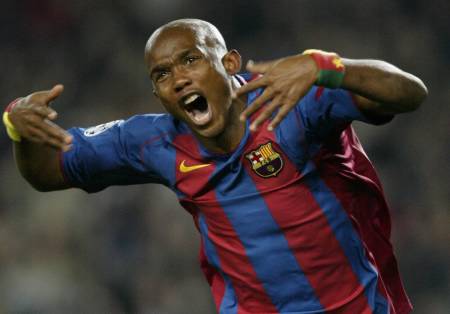 The deal is done, Ibra is gone and Eto'o has agreed to Inter's terms. Samuel Eto'o will sign a five-year contract worth 10.5 million euros a season, probably on Monday, and is expected to start working with the team on Tuesday. With him will come Hleb (whether he likes it or not, apparently) and a giant suitcase full of cash (45 million euros).

I admit it, when I first read that Ibra had left training, I was so mired in self-pity that I could hardly type. In fact, the shadow of doom had been falling on me for a few days. I knew that when I went to the Chelsea-Inter game, it would be the last time I would see Zlatan in an Inter jersey. But I am beginning to realize that I, that we, can get over this. We have had our hearts broken before. There was Ronaldo then Vieri - and if we can get over them, we can get through this. Hell, at least Ibra had the decency to leave the country; Bobo couldn't even do that for us.

Now, I am not saying that it will be easy. Ibra meant a great deal to many of us, but the cold, hard truth is: he is just not that into us. We knew that last summer, but, like idiots, we thought we could change him... that he would see what a good, no great, thing he had going and would change his roaming ways. Well, as anyone who has ever tried to change a person can tell you, it didn't work. All that is left is to pick ourselves up and go find someone better. Yep, you heard me, Better. Oh, and younger, too. Then to win like we have never won before. That will show him!

And just in case this wasn't quite enough to drive you out of your mind. Maicon is pulling the old "we'll have to wait and see" thing too. Of course, he is "happy to remain at Inter," but he doesn't sound all that excited. Like me, he is also worried about the overall competitiveness of the team, saying:

“Eto’o is a great player and we will do well. If other new faces arrive to build a strong squad, then we will be happy.”

So basically, we could be in for all this horror and heartbreak yet again. I hate this time of year.

And then there is Mourinho. He seems to have gone completely off his rocker. He has not had a single press conference since Milan. He has lost twice - IN A ROW - and no heads have rolled. And he is looking a little... well... disheveled. 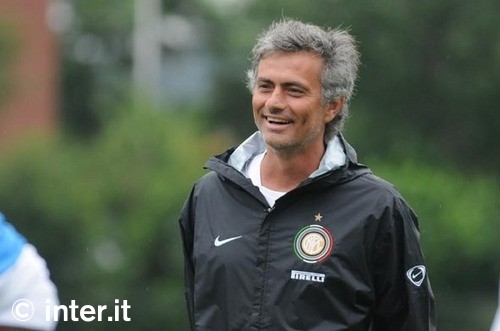 Is that the face of a "happy" coach? I dont think so. He looks as though he may be on the edge of hysteria. I think he is one bad signing away from a total melt-down. Either that, or he has decided that there is really no point so he might as well let his hair grow. Mourinho has to get Inter farther along in the Champions League or he will be branded a failure. And he has to do it with whatever Moratti gives him. I think that Real Madrid job is looking pretty cushy just about now. We so have to win this next game or I think he will start walking around with a shopping cart and muttering under his breath.

On Saturday, starting at 5pm eastern, Inter will have an open training session at the stadium. For those of you lucky enough to be attending, please take pictures. For those of you, like me, who are not, there is always you tube:

As for line-ups, well, I think we will probably see a little Lucio, some Julio Cesar, and a smattering of Maicon. Samuel and Deki are back training with the team so are probably available. Up front, we will have to rely on Milito and Balotelli. And then there is always Suazo and Destro. Whomever Mou chooses, I hope this time he is playing to win. I think the last couple games have been tinkering (plus maybe a display of Inter's inadequacies directed back towards Milan). Hopefully, Mou will pull it together long enough to at least appear to care. We really need a win right about now.

After this game, Inter will return to Milan, and, on July 30th will take on Monaco for the Pirelli-Sky Trophy. What do you bet Eto'o makes his Inter debut in this game. After that, there will be a couple more days of training in Italy, then, on August 3rd, it is off to Beijing for the Italian Super Cup (against Lazio, August 8). Everyone think happy thoughts that we will have a trequartista by then. 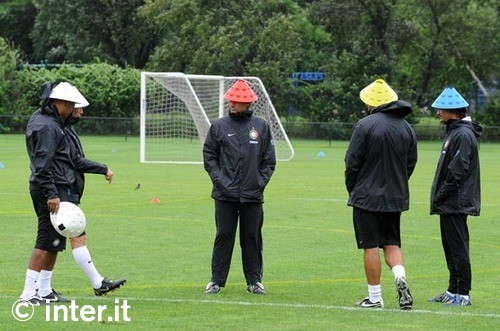