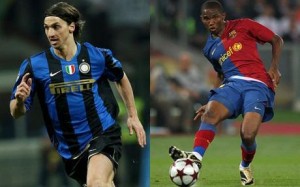 I think that we are missing the forest for the trees at the moment. Yes, these individual trees are fabulous as I have said, but Inter Forest isn’t made up of only one tree, no matter what tripe the Juve, Roma and Milan idiots try to salve their own wounded egos with.

So, I wanted to take a moment in all the preseason prediction hysteria to focus on the players that will actually have a say in how many spaces we fill in our trophy cabinets next spring. I don’t think that I am out of line in expecting at least 1 piece of silverware.

This past Saturday, my wife and I watched Inter and Milan practice. Ibra wasn’t there of course, which highlighted how many gifted players there are for this team. It also gave a lot of insight on what people mean when they say that Mourinho trains differently than other coaches. It also showed me how hard some players work and how hard some don’t.

A quick overview and then a quick look at whom I noticed working hard. 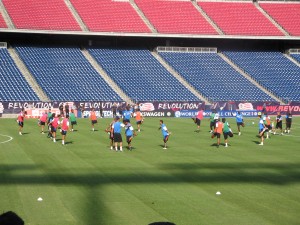 First of all, the only part of practice when the players weren’t using the ball was the stretching. In complete contrast to the Milan practice, the stretching was organized, supervised and at the coaches command. This means that the single most important part of the practice was treated as such by the training staff, and I can’t tell people how happy that made me. As a former coach – at a much lower level – stretching properly and with the correct technique is the best way to keep players on the pitch. There’s nothing you can really do about knee ligaments or broken bones or freak accidents, but pulls, sprains, tears and overall fitness can be improved. 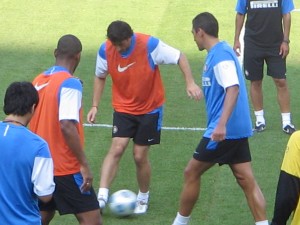 The second part of practice was a game of foot and hand passing with 4 teams in a confined area. It was a warm up and it looked like the players were all having a good time. More importantly, whatever the goal of the game was, they were working intensely at it. The coaches hovered around giving directions and restarting play whenever the ball crossed a line. Again, in contrast to the Milan practice where the players just ran back and forth a bunch of times. They did it on their own and without a whole lot of direction. Btw, after the game was over on Sunday, the young players on Milan had to run extra too, a lot. Even those who played had to run. It looked like it sucked big time – and it also looked like they weren’t too happy with it. 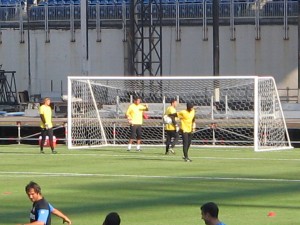 The goalkeepers were on the other side of the pitch than I was on so I couldn’t see really great but it was easy to see how they were training and who the best keeper was. The goalkeepers were using short bursts of activity to build explosiveness while slowly gearing up the difficulty. For example, the first goalkeeper up in the first drill had to move across the goal mouth while catching underhand throws. He had to move quickly in a short area but although intense, it was over quick for him. After the other 3 keepers had gone through the same drill he was up again, this time the ball is volleyed instead of thrown but it’s still right to him. The next time it’s volleyed harder. The next time it’s thrown to the side. Eventually, he has to stretch out in a full dive just to get a hand on it – all while moving across the line quickly getting up quickly in time to dive again. 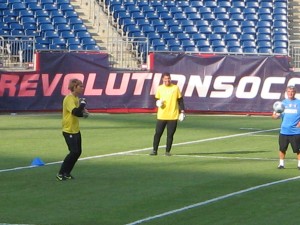 When the senior goalkeepers rejoined the squad Belec and who I can only guess was Orlandoni moved to the other end of the pitch and continued training. I got a much better look at Belec. The kid is young by player standards, but by goalkeeping standards, he’s a fetus. He also lacks a lot of explosiveness at this point and he has poor technique. His feet rarely make it off the ground on the full out diving saves and he has a short range of effectiveness. He didn’t look incredibly instinctive or crazy either. A little crazy goes a long way for a keeper. I should also point out that both keepers got rounds of applause by the fans after their drills. It was obvious how hard they were working and they had the attention of everyone sitting behind the endzone and on that half of the field where we were sitting. 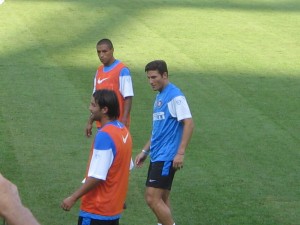 While the keepers were going at it, the team had some Monkey in the Middle drills right in front of the stands. It was obviously placed so that the fans that paid the extra fee for the tickets could get long extended looks at the team. There was some heckling and calling out that happened but it wasn’t real bad. There were a lot of Milan supporters but they weren’t the ones making remarks, I’m sad to say. Zanetti, Cambiasso, Chivu, Lucio, Santon, and Cordoba were amongst those who were right in front of me. The other two or three other groups were all to my right down the endline. The group immediately to my right looked like it had a lot of the younger guys. I remember seeing Obi Wan and Quaresma over there, I think.

The last part of practice was a scrimmage. I remember four things about this part of practice: 1. Quaresma was working his ass off 2. Mancini hit the ground about 4 times – once he needed the medicos 3. Marco left practice early – like really early 4. It was short but pretty intense. Practice ended about a half hour earlier than it was supposed to and then Mourinho and some players came to there stands area to sign stuff. I’m not really into that stuff so I hung back to try and get some photos. But the press of bodies to get stuff signed was like a horror movie doing a piranha scene. People had begun to line up on the fences way before practice ended to get good signing spots. I couldn’t get any photos of players or coaches – I tried to get Baresi but he was swarmed too – really super close up. But I had a good time regardless.

Okay, players who caught my attention:

Zanetti – Practiced hard and was always in the thick of things. He just looked like he was in control of things. Confident and in control – like during a game – that’s just how he is, I guess. And he just didn’t stop working… 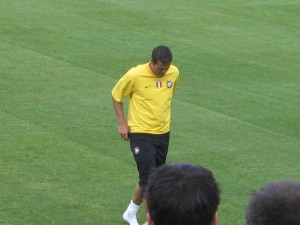 Cesar – All the goalkeepers looked good in drills but there is just a quality that Cesar has that is hard to define. He has more range, more explosion and less extra movement. Physically, I don’t think that there is a better goalkeeper in the world. He needs to work on decision making, such as when to leave his line, and catching. Otherwise he’s great. But he could be better… and that’s a little scary.

Cambiasso – Three words describe Cambiasso: tireless, tireless and tireless. It was a minor miracle that he wasn’t injured last season, as he has been in every other year since he came to the team. If he goes down… we lose a lot.

Maicon – Maicon was notable for his appearance and lack of response that I heard for him. People went crazy when Cesar did anything. I heard people talking about him, but it wasn’t really happy talk. It was more of, “Oh, he bothered to show up?” I am happy he is on the team- and as a player he’s the best in the world at what he does – but at this point do I say that he’s a legend in the making? Or am I just marking time until he’s “no longer happy”?

Balotelli – I don’t think I can express how poorly I thought he trained. I think he walked through most of it, and I think he was just there until he was able to leave. Like several others, he was spotted watching Milan practice. I am now going on record and saying that as much native ability as he has, I can see Mario turning into Adriano in 5 years. I don’t think it was possible for him to look less interested in playing.

Quaresma – He worked hard, I have to give him that. I think he also wiped out Mancini once during the scrimmage. Quaresma has talent, confidence, ability, quickness and a certain amount of speed… he just lacks… something… I can’t even put it into words. A certain strength of will to dominate, perhaps? 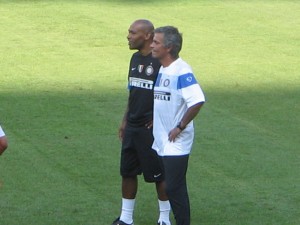 The Coaches – I wouldn’t have thought that the coaches would spend so much time actually coaching. At this point you have to figure that they know the game, but the coaches were there instructing and talking to players about the game/stretching/warm down everything, including Mourinho.

Inter went from activity to activity. The only breaks were for water and then it was off to the next thing – which is what I expected from a professional team. I was, frankly, shocked at the Milan practice. 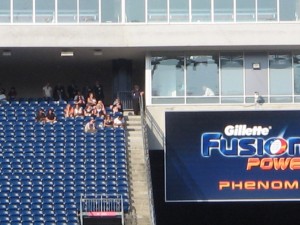 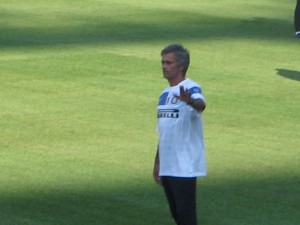 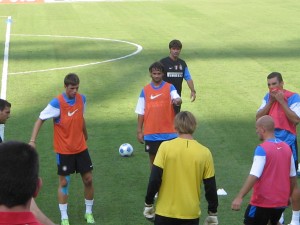 Chivu, Cambiasso, Santon, Belec and the guy who is cropped a bit to the right is Lucio 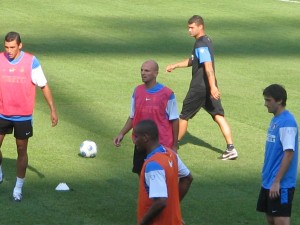 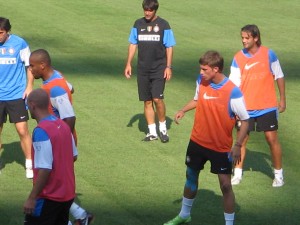 I keep reading about how Juve are getting closer to us and I look at these guys and I just don't see it... 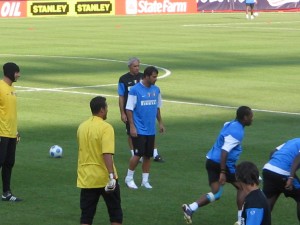 The next group over to the right from where we were sitting. Obi Wan, Toldo, Cesar and Deki 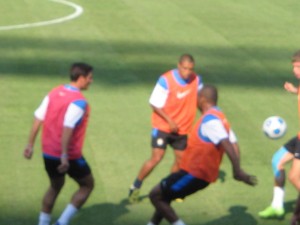 The reason I don't have more Zanetti photos? It wasn't for lacking of trying, but the bastard just won't sit still! 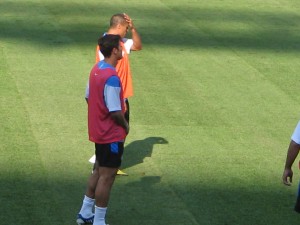 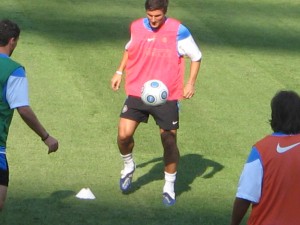 The captain at work 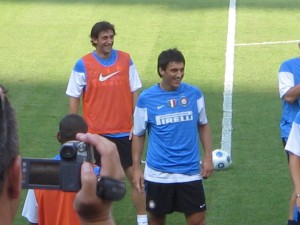 Last one I'll post, hopefully these weren't too boring. The first thing that flew into my mind when I saw this picture was, "My god, they look like they could be brothers!" The second thing that came into my mind was, "NOOOOOOOO!"