Sup Dude: This is so Embarrassing

Share All sharing options for: Sup Dude: This is so Embarrassing 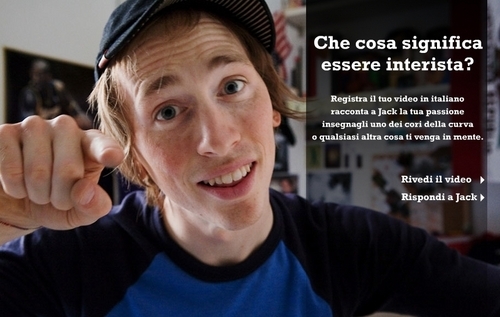 This is Jack Mackenzie. He is "a young college student in Los Angeles" and he wants to know more about Inter and what it means to be a Nerazzurri fan. He wants you to upload a video on youtube that will help him "understand the emotional relationship between the faithful Nerazzurri fans, the club, the President Massimo Moratti, José Mourinho, and the great champions that, for four seasons, have dominated the Italian tournament." The video that is the most entertaining and convincing wins a prize (and it is a good prize). Now, if only this whole marketing campaign wasn't so horrifically embarrassing - and Jack wasn't such a huge dork.

As I am sure most of you know by now, Inter is participating in a tour of the US as part of their pre-season training. The team arrives in Los Angeles on July 12 and the club is hyping it big-time. This contest is part of the hype and, for me, words cannot explain. You must watch the horror for yourself. (here)

Yikes! Who says this stuff? Plus the whole thing about how soccer is like basket ball? Really, I am embarrassed for Nike and our poor team. The video just puts me in mind of when parents try to connect with their teenage children by using what they think the hip, cool slang of the day is. The whole thing just ends up being awkward and excruciating for everyone involved. Blech.

On the up side, the prize is actually pretty darn cool:

The winner receives two tickets to LA, a room in a 4-star hotel, a car and driver, plus they get to be there with the team for the world presentation of the new kit.

As near as I can tell, this contest is open to any fan, anywhere. All the rules say is that you have to have a passport valid for the US, the video has to be in Italian (you could totally fake that), and you have to be an Inter fan. Right now, there are only three very lame video responses for poor clueless Jack. I say, post something up lickety split as there are only 9 more days (!) until the official beginning of Inter's 2009/2010 season.

You could totally win!