This Sneijder Thing is Getting Messy

Share All sharing options for: This Sneijder Thing is Getting Messy 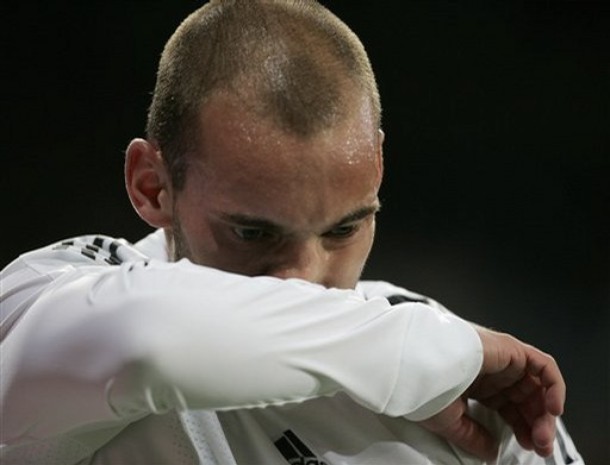 Alright, rumors should always be taken with a grain of salt - or, given some the "journalists" out there, a truckload - but Inter has been pretty strongly linked with Wesley Sneijder all summer. If you believe the newest rumors, things are getting a little icky in Spain.

Early this summer, there was some speculation that Sneijder would be offered as part of a deal for Maicon, but according to Maicon's sleazy agent, no offers arrived. Inter, still interested in the player, asked if he was available and was quoted a price of €25 million. Inter decided to look elsewhere. Sneijder's agent even said a move to Inter for Wesley would be impossible: "Coach Pellegrini considers him a key player for Real and he is not allowed to leave the club. He remains in Madrid."

For his part, Sneijder has continually said that he would like to stay in Madrid and fight for his spot. He did concede at one point, though, that if he did decide to leave Madrid (which he never would), Inter would make a nice option. He said that he thought Mourinho was a good coach and was flattered that Mou considered him his first choice for a trequartista.

Well, it now looks like Sneijder doesn't have a choice. According to sources, he is being forced out. FC Inter News has a particularly tawdry tale to tell (my translation):

Real Madrid has put Wesley Sneijder's back to the wall: either accept the transfer to Inter or else run the risk of spending the season off the squad. The coach of "merengues" Manuel Pellegrini and the Director General of Casa Blanca Jorge Valdano met in Dortmund this morning, where Real will play this evening against Borussia, and spoke with the Dutch Fantastista. The coach has opted for the iron fist: Sneijder, like Van Der Vaart, is no longer in the plans of the ex coach of Villareal, and he has kept [Sneijder] off the list of those convened for this evening's friendly against Borussia Dortmund. In addition, the club has already made it known to the player that upon return to Spain, he can no longer train with the team. Ouch.

The situation is truly a "separation in house" and is becoming increasingly asphyxiating for Sneijder, who does nothing to conceal his nervousness to the point that, reveals Sport Mediaset, in training today, according to some witnesses, was a couple of times close to brawling with some of his companions. The player, however, continues to show some reservations about the move to Inter because of some questions related to the recruitment. Reservations that perhaps will soon dissolve, considering also the fact that he has virtually been cut from Real it could at the end become for him decidedly counterproductive, especially in the year that brings the World Cup to South Africa. Inter, strong in agreement with Real, is waiting. In the end, it could be a matter of days, or even hours, before the desired "yes" arrives for the transfer of Sneijder to the Nerazzurri.

Ok, I admit it, I wanted him - or at least I want a talented attacking midfielder - but not like this. I dont want a mopey guy forced out of a team he loves who thinks of us as a nice idea. I want someone who actually wants to come to Inter.

For lack of a better phase, I want them to want me.

At least the price has come down, now they only want €15 million. Poor guy.