The saying is that Championships are not decided by a team’s performance against the top of the table but the bottom. And Parma is a team that will probably be residing in the basement in May. There were a lot of positives to take out of this game. Inter played with 3 18 year olds fresh from the youth team. The passing was very good with a lot of what is becoming trademark one touches. The 2 new forwards are starting to look scary good.

My Inter player of the game: 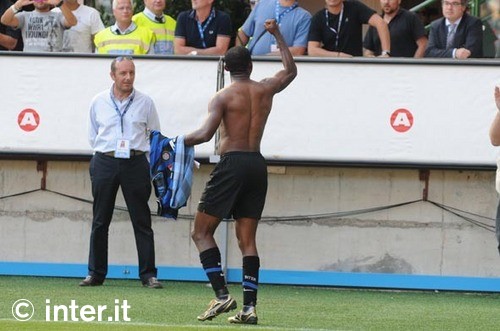 Inter has allowed only one goal in the last three games. In the same time period Inter has scored 7.

Cesar: For the second league game in a row, Julio wasn’t called to shot stopping duty until deep in the second half. There was only one threatening moment and Julio played it correctly coming off his line, making the goal as small as possible and forcing the player wide. 6.5

Maicon: Maicon was flying up the right wing up to the middle of the second half when it looked like he hurt his ankle. After a couple of marauding runs up the sideline and appearing gimpy, he played it straight as a defender. Before he was hurt, Maicon wasn’t really a factor, other than the fact that he was giving Parma fits. 6.5

Lucio: Lucio continued to push forward from the center back position especially late in the game once Parma was forced to abandon the 9-1 formation. Lucio was strong in the air and was effective in covering for Maicon and Santon when the ball came back on the counter. He was our best overall defender on the day. 7.0

Samuel: Played an excellent game with only one major mistake… and it could have been a doozy. Look, these mistakes will happen and I can be forgiving if it doesn’t happen too often. The pluses in Samuel’s game outweigh the negative. 6.5 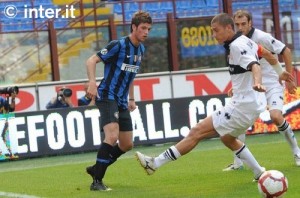 Santon: Was nervy at first which could be explained by the fact that this is his first appearance this season. Once he got going he was a joy to watch. He passed well when he went forward and he was classy in defence, especially in that little action he had with Bianbiany. 7.0

Zanetti: What a performance by Zanetti. He’s part man part horse, I swear. He pushed forward and put pressure on the Parma defence. He covered for Maicon when he went forward. Classy and tactical, he was calm and consistent. 7.0

Vieira: Other than the fact that he ran out of gas in the second half and he earned a caution in the first 10 minutes of the game he didn’t play too badly. He wasn’t too great either. 5.5

Motta: Motta had an interesting shot in the first half, but other than that I think he was pretty anonymous. He also risked a red with a frustrated tackle from behind. Playing a bad game is pretty forgivable. Making it worse by being infantile and unprofessional by risking the game making the team playing a man down isn’t. 5.0 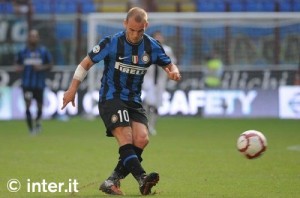 Schmujcko: Did the job by linking the midfield with the attack. I can’t complain about that. He missed a sitter and took a couple of good shots, especially the low, hard shot that almost went in the corner of the goal. He played well, better than average, but I was expecting better. He looked tired. 6.0 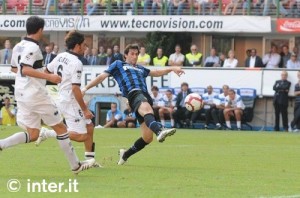 Milito: Diego played an overall good game. However, he had his moments. It’s so hard to criticize a player who obviously ran his heart out and gave effort. I can forgive a few bad passes – no one is going to make all his passes. Plus, his goal was sublime. 7.5

Eto’o: Last game I said that Eto’o brought fear. Today he proved it. Every time he touched a ball near the area I thought that there was a chance for a goal. He brought me out of my chair just by taking quick looks at the net before he brought his eyes back down to the ball. He’s strong and smart and he’s ruthless. He’s a perfect fit for this team. And he played a great game. 8.5

Muntari: Came in for Vieira at 72’. He played well as a defensive midfielder. He showed his terrier like ability to win the ball but there wasn’t really any attempt to go forward, with one exception. 6.0

Krhin: Rene came in for Schmujcko at 80’. It’s obvious that Mourinho gave him instructions before he came in to hang back and not get caught too far up. Even in this duty he managed to impress as he managed to calm a tricky moment during a counter attack and make the right pass – accurately. 6.5

Balotelli: Came in for Motta at 48’. The ironic thing is that as bad as Motta played is as well as Balotelli played. Balotelli had a hand in setting up 2 goals. He also missed 2 absolutely incredible chances. The point is that in the second half, he was a major player. 7.5

Mourinho: Mourinho told the world that he thought this was the most important game for the team this week. He decided not to rest players and he decided to attack Parma. When he decided that Motta wasn’t cutting it this week, he didn’t hesitate with the axe. It’s hard to criticize a manager when he gets so much of the game decisions right.

This was a game that could have ended very badly for us. Consider that a draw makes the newspapers run our obituary, what would have happened if Biabiany scored at the end of his 80 meter sprint? 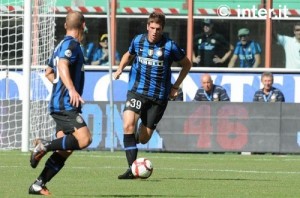 On the other hand, consider the response by the team. The very next possession we had we scored – as though the team knew that it was time to stop screwing around and just stick it in. Why couldn’t we do that in the first half when Schmujcko had a shot from about 20 meters out?!

Overall the passing was good. The movement off the ball was okay. The defense was able to go from defending to possession very quickly. We were able to decrease the amount of blind clearing from the back and build possession up the field. Even the young guys that we had in the game were pulling their own weight. But we had trouble scoring – again. Everything could have gone so badly in a trap-game like this. I hope we are more focused from the beginning when we play a team with more quality. 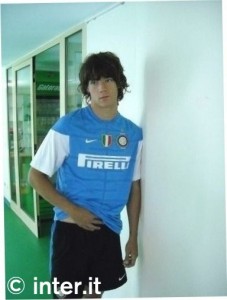 "This has been a very special week for me," Krhin told Inter Channel. "Last Saturday I made my debut for my national team, Slovenia, and today for Inter in Serie A. It's something very special - you work a whole lifetime for certain experiences and this is a dream come true."

Krhin explained the secrets of his success: "I always listen to the advice that the coach gives me. I had played for the first team in the USA but the championship is different.

"What did Mourinho say to me before I came on? He motivated me and told me again that I have his complete faith. He's a fantastic person, he loves the youngsters and he knows how to work and talk with them. He makes you feel part of the group. I like him a lot." 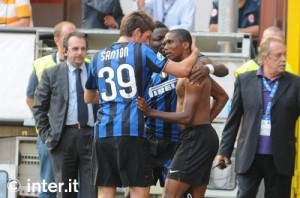 "We can start thinking about Barcelona now that this match against Parma has finished. But we won't have any problems; we'll just have to prepare well and approach this match in the best possible way," said the Cameroonian striker, who opened the scoring against Parma with a magnificent curling shot."

Sky Sport Italia's man of the match added: "Inter-Barcelona will be an important game for Inter because it's our first in the Champions League, but I think that every game is important."

Unlike Guardiola, Mourinho described Eto'o as the best striker he has ever had. "I thank the boss a lot, but I don't want to make comparisons with Guardiola," said the Inter number nine. "I can only say that it's a pleasure for me to be part of his squad and work with him every day." 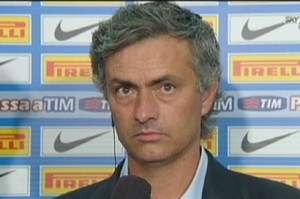 He said: "I didn't see a negative display from my team - not even in the first half. Perhaps the tempo was too slow to score, but we had many chances with many different players. Instead, I saw a Parma that were very well organised by their coach and I saw an Inter do enough to win a difficult match, but after two weeks of matches with the national teams and the thought of Wednesday's match against Barcelona, it's fine like this.

"Will we start on equal terms with Barcelona? Yes, in the first minute the result will be 0-0, but Barça are a team who can play with their eyes closed. They have had the same players for a long time. Ibrahimovic is among the new players but basically the structure hasn't changed. We have five new players but I don't want to say anything with this. The match will start at 0-0 and we obviously believe we can win this game."

Mourinho brought on Mario Balotelli for Thiago Motta at the start of the second half against Parma. "Mario has to improve a lot. He keeps doing well but at the same time he forgot a bit of defensive and tactical work in a team that was already playing in a very offensive way with Eto'o and Milito," admitted the Inter coach. "Against Milan there was no need to make a half-time substitution and against Bari I didn't succeed in making a team that could win. Changing is the job of the coach and I like making changes when I feel that the team needs a tactical and mental change at the same time. A strong intervention produces a reaction in the players, but who knows, if Biabiany had scored we might be talking in a different way now."

And to those who accuse Mourinho of having already forgotten Zlatan Ibrahimovic, the Portuguese said. "A player who has given me a lot, like Ibrahimovic, will always be in my heart, but I'm a person who forgets immediately and now I think about my players. I'm satisfied with his work at Barça but I am very happy with my strikers. On Wednesday we will give each other a big hug before the match but during the game I don't even want to know who he is. He did a lot for Inter and Inter did a lot for him. Inter are a team in the making but we have the potential to become a more spectacular team." 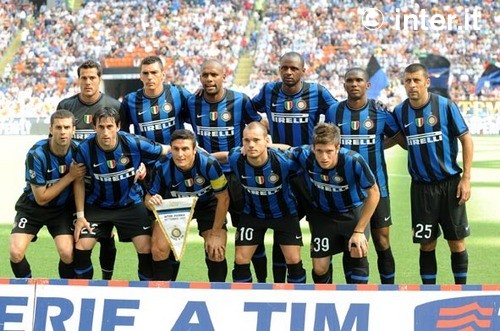