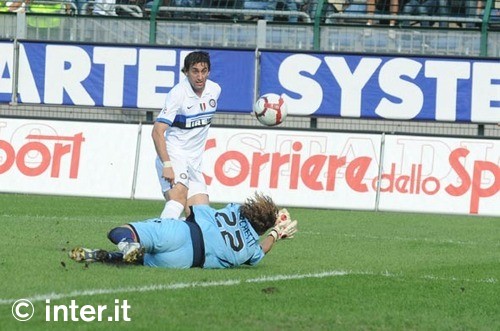 I don’t think that there is any doubt who the Man of the Match is, but in case there is, here’s my candidate 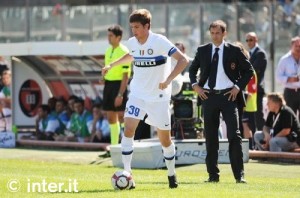 I haven’t done this before, but I am going to quote my preview of the match, “Despite their decent showing last season in Serie A, Cagliari probably has the talent of a lower half of the table team which means that this is a must win game for us. However, this is one of those teams that usually give us some problems… But there are dangers ahead. We wore ourselves out on Wednesday against Barcelona and we had a very important game against Parma the Sunday before”

And problems is what we had. Those who were online during the game let out a collective, “Whew!” after it was over.

We were clearly not at our best. We had 2 players on the field who were making their debut for the season and the rest of the players were present for Barcelona 4 days ago and Parma 4 days before that, not to mention the 15 players or so who were playing in international games.

Were tired and we looked it. Those who weren’t tired – Cordoba, Santon and Cambiasso - looked rusty. 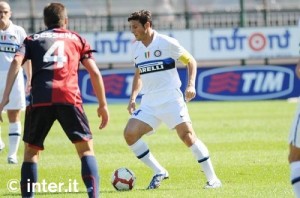 With his brace in yesterday's victory over Cagliari, Inter striker Diego Milito has brought his tally of goals for Italian clubs to 64 in 100 appearances (a goals-per-game average of 0.64). In Serie A the Argentine has scored 28 goals in 35 appearances for an average of 0.80, and now sits top of the all time list for goals per game.

Julio Cesar: Wonderful job by Cesar although he deflected two shots right into the middle of his box. That’s a no-no. 6.5

Maicon: Maicon was either tired or uninterested. He looked rather out of it and his runs up the right didn’t result in anything. He took a couple of shots from way back when he should have passed it off but it was clear that he didn’t even look up. Maybe he needs a break? 5.5

Cordoba: The defence looks a bit shakier when Samuel isn’t in, doesn’t it? I think we may be getting closer to the point when Cordoba’s age is catching up with him. There were some frantic moments back there and I shudder to think what would have happened had Chivu and Lucio not been there. 6.0

Lucio: Had several important interceptions and was a relatively cool head in the back. Looks brilliant partnered with Samuel, looks like he’s trying to cover two spots with Cordoba. 7.0

Santon: I thought Santon did a decent job in the first half. He went forward and he defended on the right. I thought he was relatively solid, if unspectacular. 6.0 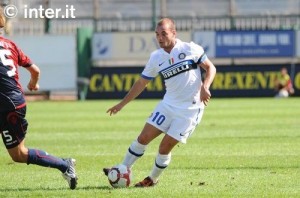 Zanetti: Solid, solid, solid. Was cool under pressure and made a run or two forward. 6.0

Cambiasso: Looked rusty as hell. The yellow was harsh considering what Astori did and got away with. I could tell what he wanted to do, but he just couldn’t do it. I hope he wasn’t stupid enough to come back too early as there was footage of him with an icepack on his knee. 5.5

Stankovic: Solid and steady he made a wonderful assist to the second goal. In this game, that gets you muchos kudos. 7.0

Schmujcko: Made a few passes and took a few shots. He doesn’t lack for confidence, which is apparent when he takes a 30 meter shot. He needs to feed to the forwards more as Eto’o or Milito has to come back to the midfield too much. Average. 6.0 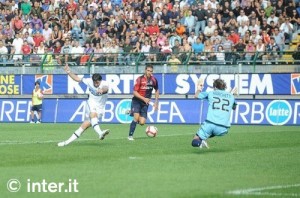 Milito: Runs the whole game long and makes some very pretty goals. He’s unselfish enough to feed others as well. There was nothing to criticize in his game today. 9.0

Eto’o: This is a hard one for me to grade. He had to come back to the midfield to gather some balls, which he did – including tackling the ball, and feeding Milito on the first goal, which is really unselfish and a pleasant change from Mario and Ibra. On the other hand, he needs to shoot more and score against teams like Cagliari. That’s the bottom line. He doesn’t look right since the Barca game. 7.0

Chivu: He saved a goal after a chaotic mess in the back looked like we were going to eat one. He has been on a really solid tear lately. 6.5

Motta: I thought Motta played pretty well before he aggravated his thigh. I think I am beginning to see a pattern with him, though. Good against bad teams and meh against good teams… looks a little familiar to my taste. 6.0

Balotelli: Another hard one to figure out. He definitely pressured Cagliari but when compared to Milito and Eto’o, they work so much harder than he does. Plus, he was served a giant chance by Eto’o with a superb pass in glorious position and he just played it horribly. He looked a little like Maicon, I thought, either tired or uninterested. The sad thing is he still looks talented as all hell when he’s just going through the motions. 6.0

Like I said above, we looked either tired or rusty and making enough opportunities to win when you are not at your best is the mark of a good team with depth.

That being said, everything about this game was unbalanced. The possession was all Cagliari, but they didn’t know how to use it. The ref was definitely trying to keep the home side in it after the equalizing goal, otherwise, why not throw out Astori for his terrible challenge on Mario. We played well up front and in back, but the midfield was all wrong – or absent.

Cagliari had the opposite problem. Their midfield was very good, but their defence is pitiful and their attack couldn’t hit the broad side of a barn if they were inside.

And this is just bugging the hell out of me; does anyone else think that the Cagliari manager looks just like Horshack from Welcome Back Kotter? 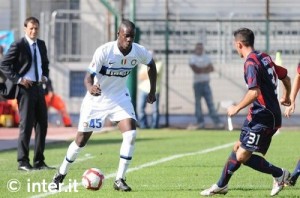 The penalty looked meh to me. I didn’t see much there in terms of a push, but it bugged me that Maicon was in the wrong position to begin with. He needed to be between the goal and the player on the side that the ball would be coming from, not between the side touchline and the player with no play on the ball.

Mourinho getting thrown out – again - was interesting and a good ploy by him, despite what some Milan-loving blogger has to say about the situation. He injected a little fire into the team, he got the team to pull together against the ref (and the crowd, more on this in a bit) and he was right – that should have been a second yellow.

Inter - Barcelona was a good game to watch with a lot of tension in it. This was just a tension filled 2 hours. A draw was as good as a loss and that says too much about the incredible pressure we are under this season.

About the crowd… reports after the game say that there were definitely racist chants/songs going on which gives Mourinho’s ire at the ref – whom he had not talked to during the game, I believe it was the 4th official that had enough of Mourinho squawking at him – a bit more credibility. After all the ref refused to give a proper punishment to a Cagliari player and Mourinho is standing by his embattled youngster who is on the receiving end of more disgusting racial abuse.

It always makes me smirk a bit at those who wish Mourinho would shut up, but the same people seem to have no opinion on racial abuse from the stands. Kind of makes me wonder what the hell people are thinking about. 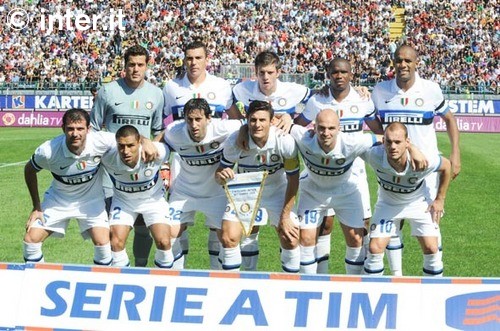