Share All sharing options for: Pre Derby News and Junk

Ok, so we are finally over the trauma of last week's horror draw against Bari. More than the dropped points (to a pretty darn good team), it was the horror of those defensive errors and that @#!%* stupid formation (sorry Vinod, but it is an abomination right now). I have put it aside, and I hope you will all too. Time to start fresh and move on. Instead, lets just focus on right now... And maybe just q snitch about next weekend.

If you all recall, this time last week, Mancini was mere moments from going to Olympique Marseilles. Well, not any more. He drug his feet, balked once too often, and they are no longer interested. Mancini is still ours... although I didn't see him in any training photos from today.

On the up side, the Julio Baptista is also no longer on the table. Well, at least for now. Branca was slightly coy and did mention something about revisiting the deal in June. The whole Nico Burdisso thing will have be resolved out somehow. He wants to stay in Rome, they want him to stay in Rome, now all they need is the cash to make it happen.

As for other acquisitions, Moratti says not this month. While Inter are still heavily linked with Ledesma and Kolorov, it seems unlikely either will come this market opening. Of course, if Ledesma's contract is rescinded after his hearing (on January 26th), he could always arrive in February as a free agent. Certianly, the the press seem to think it is a done deal.

The Kolorov deal being put off is sort of heart-breaking. Here we are, facing a real issue in defense (5 goals, 2 games, UNACCEPTABLE), and the club's big response is, well, nothing. Santon has been decidedly second string or unavailable this season and just throwing him in and hoping he will make the grade is just terrifying. Plus, the thought of Cordoba playing as a leftback again is enough to make me have to breath into a paper bag for a few moments.

The Primavera team has seen a couple changes today. First, the 19-year-old striker/attacking midfielder Sulaiman Sesay Fullah has moved permanently to Parma. Coming the other way from Novara is Stefano Tonsi, a 16 year old midfielder. No word yet on the fate of the young Finn who was having a trial with the club last week. 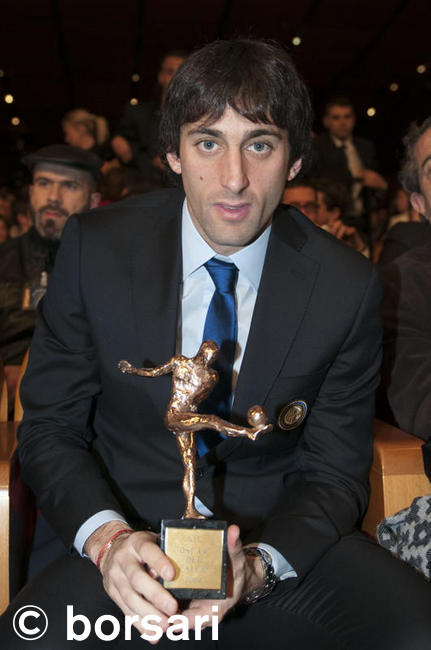 Oooo, Diego cleans up well. Isn't he dapper in his club livery?

As most of you probably know, Inter did pretty well in this year's Oscar del Calcio Awards (follow the links to see youtube clips of acceptance speeches).

Zlatan picked up best foreign player and best player over all. Mouriho won coach of the year - which is quite an honor considering it is decided by the players. Julio Cesar won best keeper, and Inter won best team of the year. Milito picked up best goal scorer and fan favorite football player, but it was for his work done with Genoa.

For all you worry-warts out there, be calmed: La Gazzetta says that Cambiasso and Stankovic will be back for the derby and that Mourinho will return to the good ol' 4-3-1-2 with Milito and Pandev up front. We may even see a return of Muntari the leftback. I have no idea if Stankovic will really be back or not, but Cambiasso and Santon trained with the rest of the team today, which is good news all around.

Derby action from days of yore: