Inter v Parma: Can We Make It Two?

Share All sharing options for: Inter v Parma: Can We Make It Two? 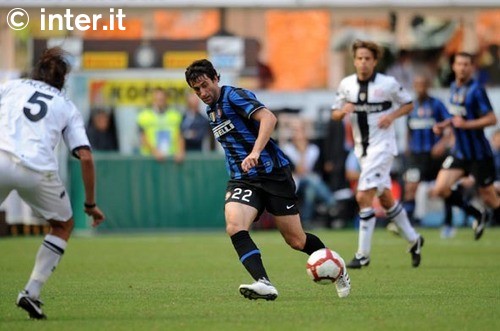 Well, here we are, Inter's last home game of 2010. The year started well, got extra special wonderful, and now we find the squad limping into the San Siro in some horror mid-table position with the hope of simply winning two in a row. Oh man, that would be sweet.

As good as Parma was (and perhaps is now), Inter almost always wins this fixture. Of the 19 times Parma have come to the Milan in the Serie A, Inter has won 12 and drawn an additional 6. For those of you not so quick at the math, that means that Inter has only lost once against Parma at home (way back in 1999). Last year, Inter played this game early in the season, at a time when they were still trying to integrate the new players with the old guard. Still and all, we managed to beat them 2-0 with goals from Eto'o and Milito. Needless to say, neither will score tomorrow.

Parma come to this game mid table, with 15 points (just five less than Inter) and a mixed bag of results. Most recently, they drew Lazio 1-1 (in Parma) after beating Bari on the road (not bad!). They dont have the best record away from home (W1, D2, L3), but we all know how teams up there ante when playing Inter. Parma has an interesting mix of aging greats and young up and comers on their squad, including some Inter has shown intrest in.

Of course, we all know Hernan Crespo. So far, he has 2 goals, including the equalizer against Lazio last week. Bojinov also has two goals this season, while the oft injured Giovinco has one. Other players of note on their squad are Candreva and Antonelli - both of which are in Branca's book. In fact, Antonelli is still on the list and there are some whispers he may be a winter target as well.

La Gazzetta doesn't think Giovinco will start. Instead, they predict a 4-3-1-2 with Crespo and Bojinov up front:

For all they hype surrounding the Atomic Ant over the last few years, he is having all sorts of trouble proving he will live up to all that promise. 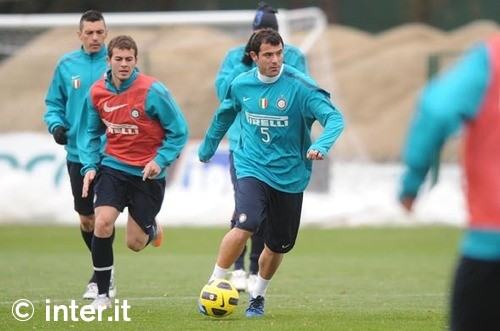 Rafa has scraped together 20 players for the game tomorrow (and I do mean scraped):

And if that doesn't put the fear of loss into you, I dont know what will. First off, the only person on this list who has actually scored in the Serie A is Lucio. And he has one goal. Another face-palm moment will be when you get to the name Rivas on the list. Yep, one of the all-time worst Inter players ever (well, in the last few years, at least). So, just to wrap up our defensive choices, we have three youth players (Benedetti, Natalino, and Biraghi), a horror show (Rivas), and two aging bulls (Materazzi and Cordoba) At least we have Zanetti, Santon, and Lucio. Argh.

The midfield looks a bit better, what with Cambiasso back and Stankovic beginning to find himself again. While TM has been called, he is not ready to start. Rafa said today that he will start from the bench and hopefully find some time in the game. 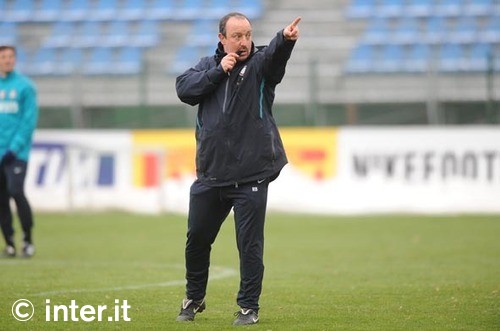 You can tell by the way he uses his walk he's a football man, no time to stop. What, the Bee Gee's Stayin' Alive and Saturday Night Fever is a bit before your time? Not Rafa's! He is gettin' down!

(by the way, if you fear the camel toe, do not follow the stayin' alive link - yikes!)

Which brings us to forwards. This just keeps getting worse. Milito is injured, Eto'o is suspended, so Pandev and Biabiany are all we have. Neither have scored this season. The man (or boy) of the moment, though, is Denis Alibec. He came to the Inter youth team last year from Romania. Apparently, Rafa was quite keen on him for Liverpool at the time but Alibec chose Inter instead. Funny how things work out. Rafa says he has been training well (three goals in the practice match) and is ready for his Serie A shot. He made waves last season by scoring two goals in the friendly against Bayern's youth team before the CL final last year. La Gazzetta has compared him to Balotelli in that he blows a bit of hot and cold, but when he decides to really play, he can be a game winner. Well, if ever there was a moment for him to make his mark it is now.

La Gazzetta has come up with a wackadoodle lineup for this game, but considering we have 6 first team members out and an additional 4 second choices (really, our injured make a pretty good team on thier own), I dont know who I would play instead:

Er, Santon? Really? I know they have been experimenting with that in training, but yikes.

So, if the win against Twente gave us hope, a win tomorrow will give us a chance. Maybe not a chance at first, but it might make second or third a real possibility. Plus, how great would it be for someone other than Eto'o to get a goal? Just to show we can. I wont deny that I am worried. Sneijder is looking better but the fact that he failed to convert any of those gift-wrapped chances on Wednesday means he is just that much more frustrated. Frustrated players dont play well. No, we want calm, assured, confident players. Given our position in the table, though, they may be few and far between.

This game is not unwinable for Inter (how is that for a pep talk?). Our defense has years of experience playing against Crespo in training while Biabiany has the same against their defense (remember, he played for Parma last season). Sure, our team is hardly recognizable from last season, but the heart looks like it is beginning to beat again and where there is a will, there is a way. The Italian press always harp on at how the Big 4 teams rely to heavily on the old guard at the expense of youth. Well, now is the time for youth to show us all what we have been missing. Alibec may have his chance to jump-start his career tomorrow. I just hope the grabs the opportunity with both hands and plays for all he is worth. More importantly, I hope he scores. And Sneijder. Wes really needs a goal about now.

I wish I could say I was going to join you all tomorrow for the game. Unfortunately, 3:30 am is a snitch too early for me (or late, depending on how you think about it). For those of you in more favorable time zones, check back here for the liveblog - I dont want to make any promises, though. Getting a college student up at 6:30am on a Sunday is not an easy task.

Come on Inter, give us reason to hope

Here is a little snippette of Alibec from Inter's 4-2 win over Sassuolo in the youth TIM cup last month (he is #11):