Share All sharing options for: Palermo 1 - Inter 1: This Is The End 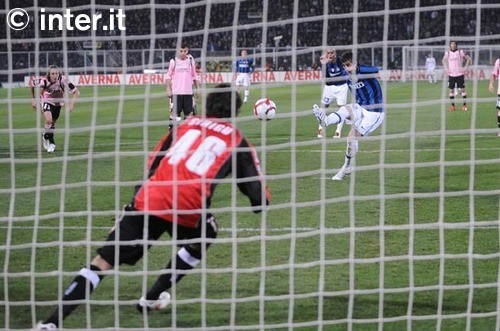 First of all, congrats to Diego for becoming a father for the second time today. Agustina Milito, was born just before midday in Milan to his wife Sofia. Sofia and Agustina are reportedly doing fine.

For your listening enjoyment while reading. A full version of the song is just too long...

As far as draws go, this wasn’t a bad one. We played the game of our lives four days ago in another country. Palermo had two attempts at goal in the first half – a pitiful roller and a nice penetration right into the crease of the center back and the full back. We hit a post. I think that we controlled the action for most of the game. We were away to a top 6 team that is reasonably tough to beat when they are at home. Milan didn’t make up any ground with their pitiful performance on the field.

All these things make this game an acceptable draw. Unfortunately, it means that we didn’t put any distance between us and the pack either. Which makes this season's ending far too close to predict and the way things are going, that ending isn't going to be in our favor, either.

My Inter Player of the Game: 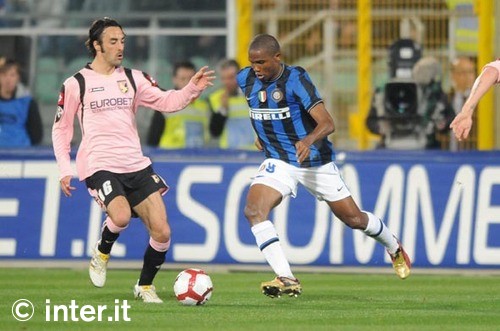 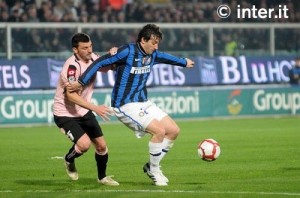 We continue our trend of getting an incredible number of cards this matchday.

Stankovic’s yellow for handling was bullshit, although he probably could have gotten one for a rough tackle later in the first half.

The fact that Bovo finished the game is a travesty though. He could have been sent off twice for my money - once at 13 minutes for coming in from behind with the cleats up on Milito and then again at 20 minutes for a beaut of an elbow on Milito again. Cavani not getting a caution for grabbing Samuel’s foot after Cavani fell on him is laughable. 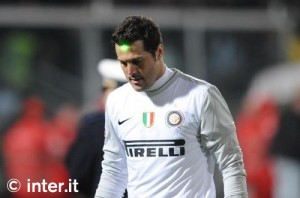 Cesar: I am disappointed that Cesar was beaten near post, although the shot was from pretty close in. He didn’t really have a whole lot to do otherwise. which is lucky for us since apparently at least one laser was aimed at him. 6.0

Maicon: Maicon bombed forward and he managed to keep his area of the defence clean. He wasn’t particularly bad, but I think that we should expect more of him. 5.5

Lucio: I like that Lucio attacks the other team when they turn the ball over, I just wish that he would pass the ball sooner than he does. Of those who played midweek, I thought that he looked the freshest. 6.5

Samuel: I thought that Walter was largely anonymous on Saturday. The goal looked like it came from his area but I wouldn’t characterize it as his fault. 6.5

Santon: A reasonably decent first day back in quite a long time. It was nice to see him on the field. I read comments to the effect that he didn’t play well, but I didn’t see any real problems. 6.0

Deki: I did not think that Deki had a very good game, bullshit yellow notwithstanding. If there is going to be a player on the field after a midweek game like the Chelsea game, to me, it wouldn’t be Deki. This would have been a good time to march out Mariga. Any bes we see him next week? 4.5

Cambiasso: Cuchu’s first game back from “suspension” had been Catania. Then he went to England midweek and had a hell of a game. He looked a bit tired and a little dull today. 6.0 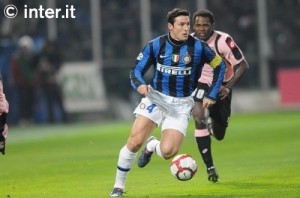 Zanetti: Other than he didn’t really truck forward very much, Zanetti didn’t look too bad off, but he did look a little dull and off color. But he did a credible job at a position that he hadn’t played in a while. 6.5

Sneijder: Wes had a decent game, but I am sensing a trend that opposing teams are using to defend against Sneijder – beat the snot out of him. If they do it while obeying the rules, I don’t have any problems, but there was a lot of extra shit that was just ugly today. Even a weakling like Simplicio tried to grab his shoulder or neck as Wes went by him… why wasn’t that stuff called? 6.5

Eto’o: I thought that Eto’o had a lovely game. He set up Milito on a couple of occasions, one of which hit the bar and almost gave us a nice little bonus for our trip. 7.0

Milito: Milito scored the penalty and he hit the post, but despite doing a fair amount of running, I don’t think that he did too much else. Part of this was the coverage that Bovo put on him. It was brutal, but frankly Milito has to work his way around it. He either has to get his shots in to “discourage” folks or he has to make them pay for their hard tactics by making them look stupid and schooling them. 6.5 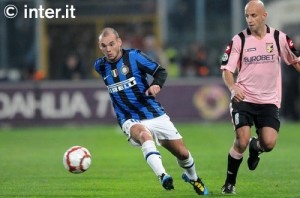 As I have said on Saturday, it isn’t the end of the world that we drew. Palermo is a tough team at home and although I think that we are better and that we played better it was always going to be difficult due to the Champions League and schedule congestion. I am just going cut and paste this onto every game we have left, since we go deep into April with a thick schedule. On Wednesday we have another game. On Saturday, we have another one, I think. Then we have another Champions League game midweek. If we can’t find balance between the two, we are going to screw ourselves in both competitions.

In the comments section I have read that we are now playing on 3 fronts. I think that this theory is incorrect. We are fighting on 2 fronts – the Coppa Italia now becomes a distant third on the list of priorities. In fact, as far as I am concerned, Coppa now becomes Primavera Try-Out Time. The Coppa is a wonderful tournament and I hope that we can win it every year, but there are only so many horses in the stable and they can only run so many races. This is why we promote 4 guys every year.

Okay, in a few days we get to do this all over again… only this time, Napoli and us are the only teams in the top 7 that get to play at home. That is an advantage that we need to exploit for the next matchday on the 24th. I just hope that it matters in the end. Milan is getting much more love from the league officials than we are. I read this prediction in the comments section of La Gazzetta regarding the Milan game today:

This means, for those who don’t speak Italian:

Plus, and this is rather interesting, remember the bending over backwards the FIGC and VP Albertini did for Milan to give them a break in the schedule so that Milan could be fresh for the Derby and their Coppa game? How much would anyone here like to bet that we won’t get that same consideration – for freshness - considering our upcoming schedule? $100? $200? $0.01?

We just aren't getting any breaks, the schedule looks a bear, Mario - a player whose magic feet we could use - is AWOL and we look distressingly thin at midfield. If Mourinho can make our thinning grit last at least 13 more games (9 league, 2 Champions League and 2 Coppa), then he will have definitely have earned his pay this season. 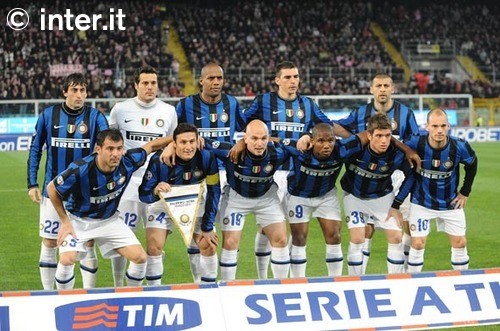