Something to Replace the Page that was Here Before

Share All sharing options for: Something to Replace the Page that was Here Before 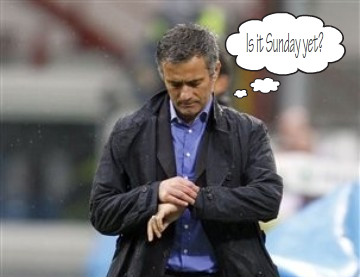 Basically, I am just sick of looking at the page that was here before (no offense, MAD. I just have a short attention span). There is not any one specific issue that needs to be dealt with, but there are some odds and ends we can talk about. As for the 500-pound gorilla in the corner (ie Mourinho will he wont he), I plan to keep pretending it isn't there. At least until it starts throwing poop or something. Gorilla? What Gorilla? See how easy that is.

This last week without a midweek game has been eternal (and it is still going on). Almost all the news (Inter or otherwise) has been about the upcoming summer coach swap meet, but since that topic gives me agita, I have to look a little farther afield.
.

***UPDATE*** This just in: Inter is coming to the US again this summer. Right now, all I know is that Inter will play a friendly against Manchester City at the M&T Bank Stadium in Baltimore on July 31. I will try to keep everyone updated as to other games as they are announced (thank you Google alerts!).

Highway to the dangerzone (how could I resist?)

With the current er.. climate leading up to this last, all-or-nothing game, the authorities are a bit worried that Roma fans traveling to Verona and Inter fans traveling to Siena will meet at Autogrills on the A1 and violence will ensue. As such, the Interior Minister says that they are "meticulously and painstakingly" preparing to prevent contact. I would hope that fans would find a way to get past the rivalry off the pitch but I must admit, I worry. I find this resurgence of football violence incredibly distasteful. I would hate for anyone to get hurt just because they support one team over another. Fingers crossed this has been way over blown and sensationalized.

In a similar vein, Mezzaroma is upset that this weekend is a no-win situation for him and his club. If Inter win, people will say Siena didn't try hard enough. If Inter win, people will wonder about those bonuses that were brought up this week. He said: "With Inter we have everything to lose. If it goes poorly they will say that we have beaten Mourinho, if we win they will accuse us of having taken money from Roma. These insinuations make me crazy."

Ok, hands up: who thinks anyone will actually think someone has bribed Siena to win? If Siena win it is because Inter have one incredible brain fart of death (in which case we deserve to lose this championship). Given that they already had 2 million on the table to stay up, it is clear that money incentives aren't enough. 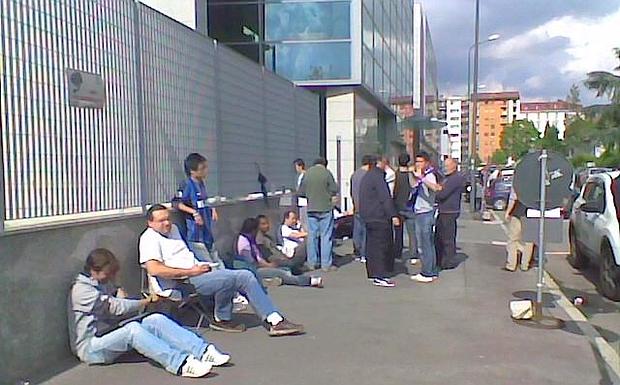 On a brighter note, Inter fans have already begun lining up to buy the 5000 available Champions League final tickets. They dont go on sale until Saturday so they will have quite a wait. Plus, they are not cheap - 240 euro a pop. Inter have another 11,000 tickets they will distribute to friends and family (the club has a whole lot of friends and family), and staff and whatnot, plus another 5000 for the Inter Club and the Curva. So, if you want a ticket, either get in line now or start making friends with someone down on Corso Vittorio Emanuele.

Many Inter squad members have been called up to represent thier countries during this summer's World Cup. Here is who to watch come June:

Agentina: Samuel and Milito
I have no idea what is going though that dwarfish coke-fiend's head, but leaving Cambiasso and especially Javier Zanetti off the roster has just about torn it between me and the Argentinian National Team. When asked, Maradona said: “There is nothing strange and nothing to explain about Zanetti's exclusion. It was already decided a long time ago. And as for Cambiasso, it's the same story.”

So, boys, it doesn't matter how well you play, Maradona has already decided everything well in advance. He is a horrid little man. 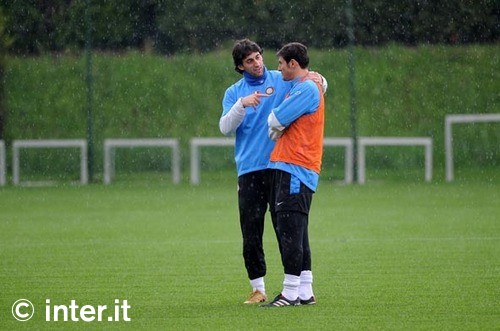 "Dude, you are still totally the man. Dont pay any attention to that horrible little troll-man."

Brazil: Julio Cesar, Lucio, Maicon
No surprises here. Brazil has an embarrassment of riches. The fact that Pato was left home goes to show just how hard it is to compete in that group. Strangely, though, Roma's Doni was called up... Has he even played this season?

Cameroon: Eto'o.
This time there is lots and lots of time for him to find his mojo after playing for Cameroon.

Ghana: Muntari.
Admit it, he looked pretty good in his undies!

Netherlands: Sneijder
Guess who just got her #10 Dutch National Team jersey in the mail today? ME! Thats who. I have always had a soft spot for the team, now I have a legitimate reason to cheer for them.

Serbia: Stankovic
Oh, and the SO got me the new Vanity Fair - And I put him under the cut.

Slovenia: Krhin
The Baby made the cut! Hooray for Baby!

Everyone else gets to go to the beach (shaking my fist at Maradona).

Deki shows off his flag.

I thought I would share some links to places I like to go on the internet - places you may not already go to.

Press Display: In case you didn't know, you can subscribe over the internet to La Gazzetta dello Sport. Sure, the articles are in Italian, but it comes with a rudimentary translator for those who prefer English.

The Lega Calcio: a great place for all the match statistics you could ever want. Also in Italian but mostly numbers.

Curva Nord: They post photos of all choreography from home games.

Transfermarkt: Transfer history and stats for players. For instance, did you know that Sneijder is estimated to be worth 35 million Euro? Considering we paid something like 16 million, that is a pretty good return on our investment. Not that we would ever sell his card or anything.

Daylife: my one stop shop for match photos.

Oh, and ever wonder what they are singing in the Curva Nord? Well, here you go: