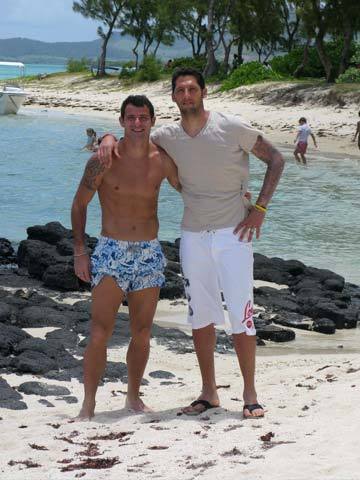 Now that the World Cup is winding down, it is time to start thinking of the upcoming season in earnest. But we dont even have a finished squad, you say. I know, but time waits for no man, not even Marco Branca. Inter's first official game of the season will be against Roma for the Super Cup at the San Siro. Leading up to that, though, is a whole host of friendlies and cup games. Which is super good because I still have no idea what sort of coach Benitez really is. To illustrate how quickly time has flown, the majority of the squad is expected for pre-season training at La Pinetina on July 12. That is next Monday. And we have so much to do...

Well first, not everyone will be back in training next week. Those players who made it past the group stages get a couple more weeks off. Our Brazilians, Argentinians (which at this point, still includes Burdisso), and Muntari will meet the team in the US for the tour, around about the 26th of July (the team leaves Italy on the 25th). Wesley Sneijder, our lone World Cup participant, probably will skip the tour and join the team when they get back to Italy in time for the Tropheo Tim in Bari.

And if that sounds grueling for a group of people coming off what has probably been the season of their careers and then the World Cup, just wait until you look at the full schedule as it stands right now:

July 25: Leave for the US
July 26-29: a friendly in Philadelphia, the team and date are yet to be announced
July 31: Baltimore, v Manchester City
August 3: Toronto, v Panathinaikos
August 5: Dallas, v Dallas FC
August 7: Most of the team returns to Italy except the Brazilians (provided they get the call) because...
August 10: Brazil v USA friendly in New York
August 13: Trofeo Tim v Milan and Juve in Bari. I dislike this tournament a lot. A whole lot. Someone always seems to get injured in it.

And now the real games start to pile up:

After that, Serie A games begin (the schedule will be drawn up at the end of July). The first weekend is supposed to be the 28th and the 29th of August, but due to Inter's UEFA commitments, our first game will probably be pushed back to Monday the 30th (or so says La Gazzetta). Unless, of course, Inter cant get a 24 hour hold for our African players (and provided any of them are called up). That first weekend in September is an international break and FIFA regulations say that African players must be released by the 30th. That means, we either potentially do without our African internationals in our opening Serie A game, get a special waiver, or push that game back to some time in October - effectively starting our season after the break.

Whew. Just writing it made me tired. I cant imagine what the boys must be thinking.

Add to that our Champions League games, Coppa Italia, and now the World Club Cup and it becomes clear that we need some reinforcements. And Branca better get a move on. There is just no way that we can seriously compete in all those tournaments unless we have some serious depth. Like depth that actually sees the field once and a while.

Which brings us to the transfer market

Still the best? An early exit may have finally put to rest all this "Maicon to Spain" talk.

Or lack thereof, which is the case for Inter. So far, there has been lotsa talk in the press, not much else. Branca seems to be taking a "let them sweat" attitude because agents are saying they haven't been in communication with the club. In fact, Maicon's agent had such a hissy fit that no one was returning his calls that he went to the press. Maicon responded (also through his agent) by saying that he is perfectly happy to stay at Inter but that if the club were to sell him, then he wants to choose the club he goes to (read: I dont wanna go to Manchester City). Which is great because now Bronzetti (Perez confidant and Real insider) says that Maicon is no longer a Real Madrid target. Whoopie. I guess bombing out of the World Cup has taken the shine off poor Douglas. Of course, this could just be a Real negotiating ploy.

At least Moratti finally admitted that no matter what the Maicon situation is, we need a left back. I have been saying this since last summer! This will allow Chivu to move to the center where we could really use a little help. No word on who that person may be - all we know for sure is that, as things stand, he will be an EU player (Coutinho has filled our quota for this year). Last winter I would have said Kolarov, but Lotito wants an arm and a leg. Plus, he is not happy that Faraoni chose Inter over staying at Lazio.

So here is your chance to start the next crazy rumor: Who should Inter bring in as a new left back?

Talk about out of left field... Are these people crazy?

Anyway, every day that no one is signed is one more day for crazy names. The newest to emerge is none other than Schweinsteiger (utter insanity). Not for this season, mind you, but for the one after. As near as I can tell, this is just pure speculation on the part of Mirko Graziano (the author of the article).

This is going to be a long summer.