Yes, the Market is Still in Session

Share All sharing options for: Yes, the Market is Still in Session 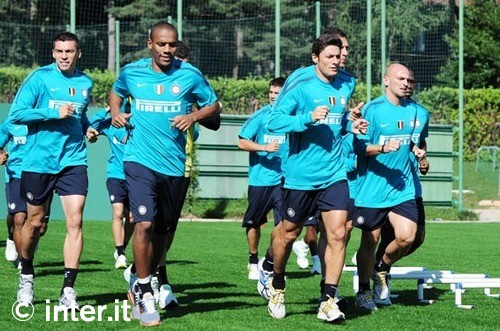 Although you wouldn't know it to look at Inter. Sure, we finally concluded that whole Balotelli affair, but the incoming players have been few and far between. To make matters worse, today is Ferragosto and most of Italy is either at the beach or in the mountains this week. Except football players, that is. Inter's are hard at work getting ready for the Italian Super Cup, and while they looked ok against Juve, that Milan game showed there is still a bit of work to do.

The UEFA Club Football Awards nominees have been announced and Inter figures prominently.

Plus, one of these nominees will also win the UEFA Club Footballer of the Year 2010. Winners will be announced during the Champions League group stage draw on Thursday, August 26. 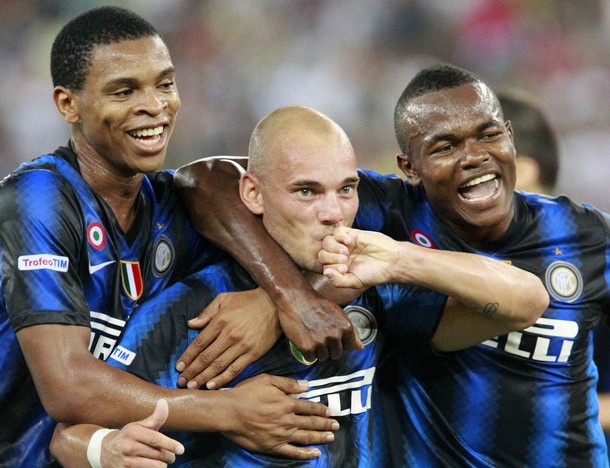 Is he good enough to beat out Messi?

A quick look though the list shows that the competition is quite stiff, except for maybe in the Defender category. I just dont see how either Maicon or Lucio doesn't walk away with this (I bet it will be Maicon). As much as I love Julio Cesar, I think Lloris will be awarded Best Goalkeeper (although I still want JC to win anyway). The Midfield category is particularly tough. The buzz around Sneijder is huge right now, though, so I think he has a pretty good shot at this.

Best forward will probably go to Messi. Really, Milito could score 10 goals in the CL final and this award would still go to Messi. It is just the way of the world. I feel badly for Milito as this may be his last year to really garner the recognition he deserves but there is just no way to compete with Saint Messi.

Similarly, Lionel Messi is the bookie's favorite to win the Player of the Year. Even so, when I look at the Champions League campaigns of Bayern Munich, Barcelona, and Inter, I think that both Robben and Sneijder where more influential and important to their teams than Messi was to Barcelona. Which is not to say he isn't a very talented player, only that Robben and Sneijder were more decisive for their respective teams. Put another way, Inter and Bayern need Sneijder and Robben more than Barcelona needs Messi. It doesn't matter though. Messi will probably win. As I said, it is just the way of the world.

It may not look like it, but Inter is still actively working the market. Balotelli is gone - we knew he would be - while Maicon is staying. I think this is largely a function of the new 1 non EU from outside Italy rule. Inter was in negotiations with that Uruguayan right back (Aguirregaray) but had to abandon the deal because we already had Coutinho coming in. If that rule had not been implemented, I think Maicon would be a Real Madrid player right now.

As for Balotelli, it is really for the best. He wont be subjected to monkey chants when he goes out to dinner with friends and journalists wont be waiting by the gates of the training facility to see if he is on time for practice. Still, if he thinks that Manchester City fans wont jeer him for being lazy or divey or for disrespecting the team colors, he has another thing coming. In the end, though, I think this will be a growing experience for Mario - whether it is positive or not is entirely up to him. I will gladly admit that I am disappointed that things did not work out for him at Inter. Also, that I will miss him next season. Even so, if he couldn't bond with his teammates at Inter last season then it will never happen and for everyone's sanity, he needed to move on. I hope he knocks them dead in England. 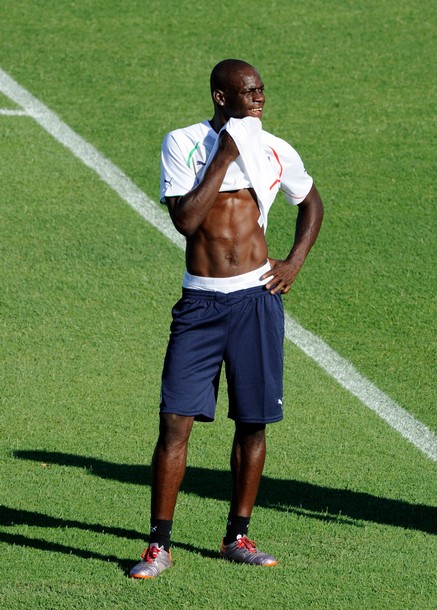 Now that the whole Mario drama is over though, Branca can turn his mind to more important things, namely Balotelli's replacement. According to SkySport, the newest name is some relatively unknown Danish kid named Morten Nicolas Rasmussen. He is 25, a Danish international, and plays his club football for Celtic. Ok, hands up: who has ever heard of this guy? Cause I actually saw Celtic play this summer (against the Sounders) and I dont remember him at all. 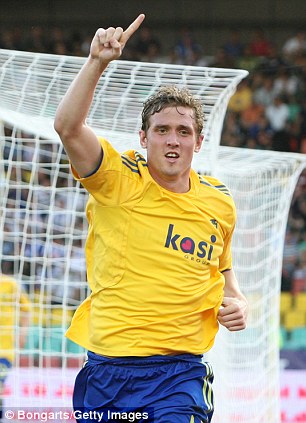 Nope, the picture doesn't help - I still dont know who Morten Rasmussen is.

Besides, one wonders if this isn't just entirely pulled out of SkySport's ass given that he just joined Celtic last January and his bio on their web page says: "The Danish internationalist is an old-school, penalty-box striker and is viewed as a major part of Tony Mowbray's long-term plans." Plus, given the recent arrest warrant issued for him, he may not be at liberty to leave Scotland. (ok, it was only for speeding, but still, missing his court date doesn't look good).

Sculli seems like he is coming to Inter. I dont really understand why, but there you go. He has reportedly bought a house in Milan and will make the move later this week. At 5 million euro, he is certainly easy on the pocketbook, but I just dont see him as a player for a club with high aspirations. I guess he seems like settling to me and the really great clubs never seem to have to settle. It is a little frustrating. 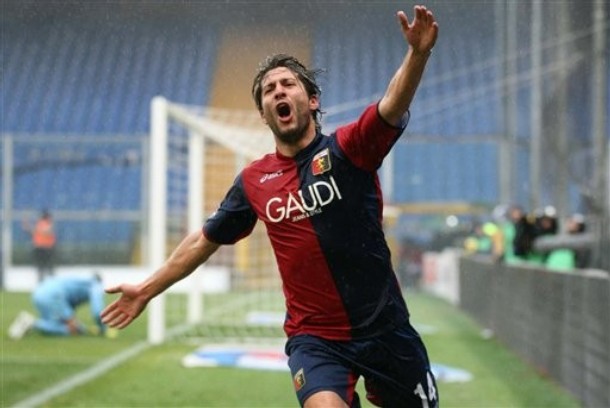 Really? We just won the triple and this is the best guy we can pull? Really? Yikes.

In terms of midfielders, Mascherano and Ledesma are still on Branca's list. Last week it looked like Mascherano was well on his way to Barcelona but then the offer failed to materialize. Even though both Liverpool and Macherano himself say he is on the way out, but a 25 million euro price tag is just too much for this season's market.

Since Barcelona did not make the big offer Liverpool were angling for, it may be they are willing to consider 10 million plus Muntari. That is all well and good, certainly more reasonable, but I think it will be difficult to pry Muntari out of his "second family," as he has taken to calling Inter. The big test will come this Thursday. If Mascherano plays in Liverpool's Europa League qualifier against Trabzonspor then he will be cup tied and his transferability will go down quite a bit. Basically, if he is cup tied, he is no use to either Inter or Barcelona.

Ledesma's name has cropped back up again. Word is that he and Lazio are having trouble coming to terms for his renewal so offers are now being accepted. Sportitalia say that Juve have offered 5 million euro but Lotito wants 10. As I say, much depends on what happens Thursday with Mascherano. Also, Lotito is still angry about that whole Pandev deal last winter so may not be too keen on dealing with Inter.

Going the other way, we still have a bit of a bloated squad. Burdisso will probably go to Roma next week (after the super cup) for 6.5 million. With interest from Chelsea, 5 million is just too far below his market value of 7.5 million to really consider. 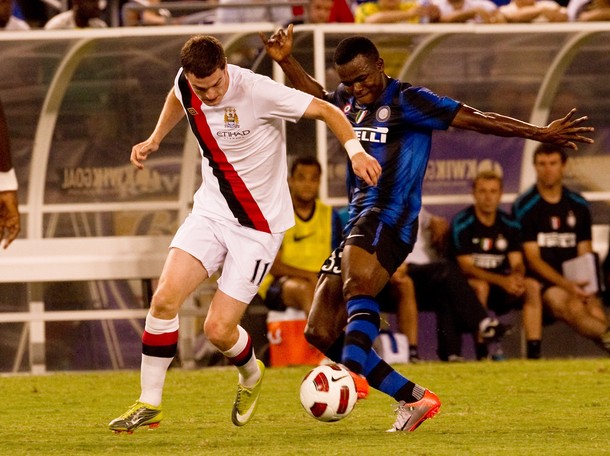 What is the consensus? Is Obinna ready to make the jump to Inter?

Others on the out list include Rivas, Obi, Mancini, Kerlon, Suazo, and Obinna. Obinna has made no bones about it - he wants to stay. Certianly he is playing like a lad looking for a spot on the team. What do we think, is he ready for the big leagues? He isn't getting any younger so if not now, maybe never. At this point, I am willing to take up a collection to pay a team to take Mancini or Rivas. Better yet, Mancini and Rivas. That may be the only way to scrape the two of them off. Kerlon is horribly injured and back in Brazil for treatment. He is likely unsellable. Obi is looking pretty good and Branca should have no trouble finding him a loan deal some where or other. Same with Obinna (if he goes). Suazo needs to move on but I think his wage demands are just too high for the type of club he would excel in.

So, while there is nothing definite in terms of incoming players, there are irons in the fire and Branca certainly has his work cut out for him finding teams to take our growing cast of extras.

GETTING READY FOR ROMA

The boys are back in training today in the final push to get ready for Roma and the Super Cup. They have a small game against the youth squad tomorrow as Rafa wants to try some tactics. I have to say, the lads look like they need a little sharpening up as well. Sure, that 45 against Juve was passable, but the second 45 against Milan was horrific. Basically, I want to win this game so the squad better get cracking!

Santon is back training with the squad (hooray), as is Zanetti (you just cant keep him down). Mancini, Thiago Motta, Muntari, and Alibec had individual sessions. Thiago Motta has some sort of knee injury. He would like to be available for the Italian super cup, but it is iffy. Mancini is better off unavailable than actually playing.

Well, I guess that is all the news/rumors.

Dont forget to enter my contest (detail are here), there are prizes and everything.

Now the Inter squad is taking up flying. 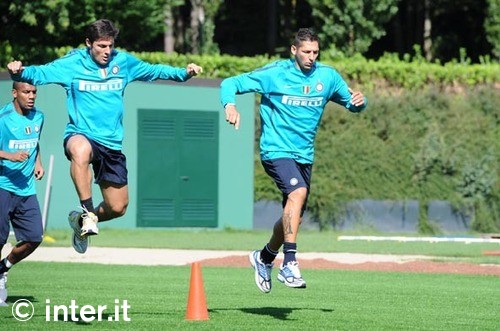