Share All sharing options for: Rafa's First Real Game of the Season: Its Super Cup Time! 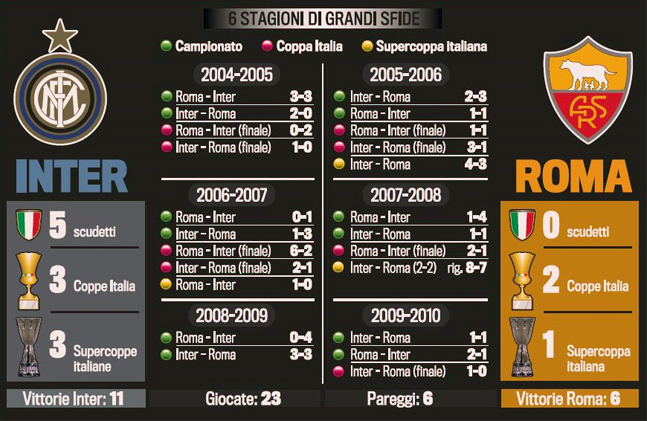 Yep, its time for the first real game of the new season, the Italian Super Cup. Conceptually, this game is played against the winner of the Coppa Italia and the winner of the Scudetto. This year, though, things are different. Why? You may ask. Well, because Inter won the Coppa Italia and the Scudetto last year (Inter also won the Champions League, but that's another story). Since Inter cant play themselves, the Coppa Italia runner up, Roma, will have to do. Luckily, Inter has a whole lot of experience on that front (see above). But it will be hard. Rafa and the boys will have their work cut out for them, no doubt about that.

This will be Inter's sixth consecutive Supercoppa final (a record), and the fourth time Inter and Roma will contest it. Inter already has 4 supercoppas (supercoppe?), as has Juve. Milan has 5, the most of any team (Roma has 2). As you all will probably remember, last year this was the only trophy that slipped through Inter's grasp. Given how the rest of the year went, I think I can live with that.

The last time we played Roma was in the Coppa Italia Final - and we all know how that ended.

The last time we played Roma in the super cup was way back in 2008 (think Figo, Ibra, and Maxwell). Much like tomorrows game, it was the first real test of Inter's new coach (then it was Mourinho). We were nervous, he was nervous and it was hotly contested, but in the end, Inter won that game as well. After four great goals (two on either side), the game went to penalties. In the end, it came down to the two captains...

Part 1 (warning: video contains moments of Balotelli brilliance - not advisable for those not quite over him)

Part 2 (Remember, this is Zanetti's first ever PK)

I could live with another finish like that. (But Stankovic really really really needs to work on his PKs. He missed against Milan as well)

If you want to know about them, go on over to the Roma board. There is lots of Roma stuff to do there. So much so that I am not going to do much Roma stuff here.

La Gazzetta is predicting Ranieri will play a 4-3-1-2:

With the still out of shape Adriano starting on the bench. (I wonder how the Curva will react to him)

Probably the most important part of the line-up, from an Inter fan point of view, is the inclusion of Lobont in goal. Now, we all know that players have been known to step up their game a bit here and there when they play Inter, but this guy, lets just say that I haven't been all that impressed with him. By the same measure, every player has on off game now and then, but take a look at Olympiakos' first goal. See what I mean. Now, I know that he had three good games last season and that this was only a friendly, but unless this guy was just suffering from a horrible case of brain farts, Roma are going to miss Julio Sergio. A lot.

As for the rest, we all know that Roma are formidable opponents. They dogged us every step of the way for the Scudetto and fought us to the bitter end in the Coppa. They have talent at their disposal. Plus, just like two years ago (the last time we pipped them to the Scudetto), they want this trophy. Maybe even feel the teensiest bit entitled... Well, they didn't get it then and hopefully, they wont this year either.
(fingers crossed, toes crossed, chanting and burning incense for Calcio Gods) 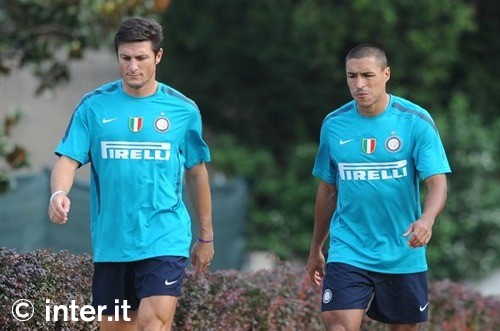 Zanetti and IRC already have their game faces on.

US
Rafa has called up the usual suspects:

Thiago Motta is having issues with his gamy knee (the one that effectively ended his Barcelona career) and has had a check in with his old surgeon. Santon is not quite match fit yet, it seems, while everyone else is either total crap (Mancini and Rivas) probably on the way out (Burdisso, Obinna, and Muntari), or not recovered from injury (Suazo and Alibec). Even so, I think we have a pretty decent squad at our disposal. 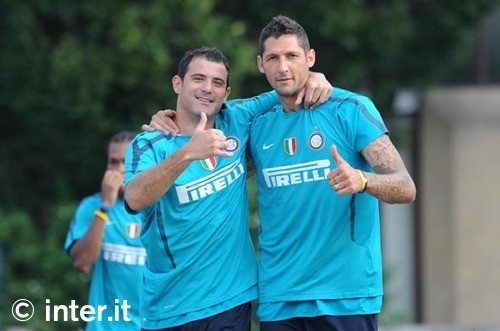 The bromance continues. Deki, don't mug to the camera, practice your Pks!

I have no earthly idea what Rafa has in mind for this team. La Gazzetta thinks he will basically play our tried and true 4-2-3-1. The only real question is, will he start with Zanetti at leftback and Stankovic in the midfield? Or go all Madrid and play Chivu at the rear with Zanetti and Cuchu in the midfield? Tough call. So I wont:

Maybe. I mean why mess with something that isn't broken? I know, Eto'o wants to play more forward, Mariga has been playing really well, and Coutinho needs a run out, but I think Rafa wants to start his tenure on a high note and right before a big game against a very talented team is not necessarily the best time to start experimenting. Lets win this and the UEFA Super cup then we can start working on some new moves to wow them in the Serie A and Europe.

Rafa seemed to suggest during his presser today that he would stick to basics for this first game:

"We are working hard in every training session to improve things. Improvements can always be made. After one, two or three months it will be easier, but they are all willing to learn and gradually we will introduce different things. They have won three trophies and now they can win another. They are motivated." [emphasis added by me]

So I wouldn't look for anything too crazy tomorrow. 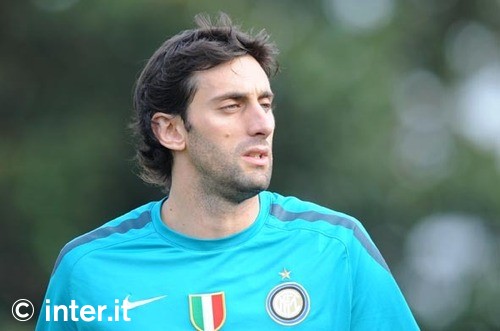 It's the eye of the tiger, it's the cream of the fight, risin' up to the challenge of our rival.

Certianly, the players are raring to go. Stankovic started it earlier this week by saying he was "a soldier at Inter's service." (He sure talks pretty) Then Pandev comes up with: "We are Inter and inevitably we must aim to win everything." (Nice, we like that too) Then, to top it off, there is this little gem from Sneijder's facebook account:

L'Inter può essere la tua ultima squadra?
(Could Inter be your final team?)
Ho 26 anni e almeno altri 8 anni da giocare, quindi perché no?!
(I am 26 years old and have at least another 8 years to play, so why not?)

I mean, really, how cute is that? I could just squeeze him.

In fact, the only player on the list I am slightly concerned about is Milito. I dont think he has had enough time to really get into the swing of things yet. He looked a bit out of sorts during the preseason friendlies (despite the goal). Somehow, he just doesn't seem himself quite yet. Not that we cant beat them. I totally think we can (we did before, after all), but it is going to be hard. On the up side, it will be good practice for the UEFA super cup next week (I promise, we will liveblog that game). This team knows how to win and is very motivated, with or without our Portuguese white feather.

Anyway, lets just win this thing so we can get on with the rest of the season.

Oh, and dont forget to enter my contest - you only have about a week left!

A little something to get us in the mood: