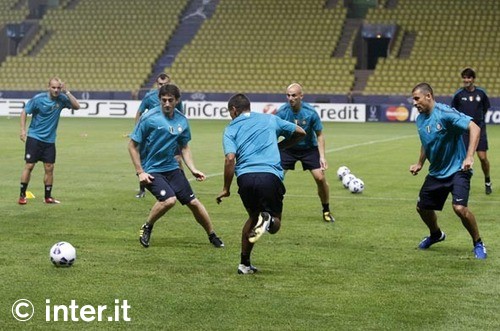 To say that I respect this team is an understatement. Basically, I am scared witless of them. I really really really want to win this game. This is Inter's first ever UEFA Super Cup and, if we want to stay on track for the 6, we need to win this game. The only problem is, this is Atletico's first time as well and they want it every bit as much as we do. And they are a good team; a fast team; a young team. In our corner, though, is belief. After sweeping the UEFA Club Football awards, our boys have to feel like they are on top of their game. Now, only if we can figure out this high defense thing then we may have a chance. 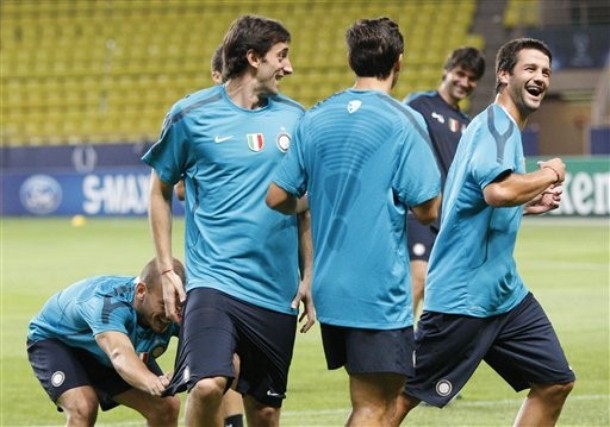 I wonder what color undies the UEFA Football Player of the year wears?

Ok, just to add to the firstness of this game, this is also the first time that inter has played Atletico. We have plenty of experience with their cross-town cousins, but a whole lot of nothing with them. Still, they are the most formidable team Inter has met since last season. Forlan is a force of nature and Kun is no slouch either. In fact, the more I think of them, the more tense I get. 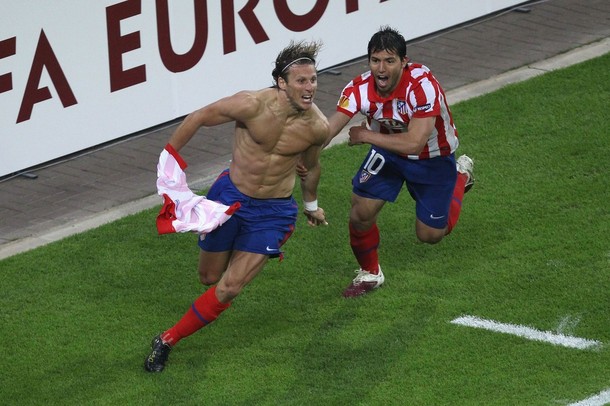 If you give these two and inch, they will score on you. I approve of the celebration, though (just not tomorrow).

Similarly, I have very little personal experience with Atletico or La Liga. Still, I know that Atletico has talent and can (and probably will) cause problems for us. What's more, they seem like nice guys. Aguero said earlier:

"To begin the season by beating Inter would be beautiful, we are ready to give the maximum and become the strongest team in Europe. It will be very difficult but if we must lose against Inter, It will not be a failure given the players on the roster, you see Sneijder, Milito, Maicon... and then their coach is a technician like Benitez who has already proved his value in places like Valencia and Liverpool."

Wiping the drool from my chin and moving on...

Benitez and Zanetti had press conferences today. Not much of any interest was said. For Benitez it was Atletico is a great team, very athletic, I am just a coach, bla bla bla, only thinking about this game. I tell you, I sort of miss the Mou drama. Sorta.

For his part, Zanetti did well to brush off the reporters. They tried to draw him into saying something about Ibra, but he was too smart for them, saying: "It has no effect on me. Each person makes his own choices. We are all professionals. I only think about Inter." 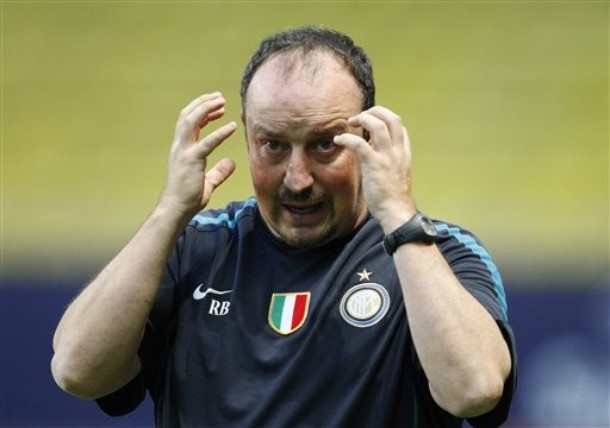 Rafa seems to be having some difficulty expressing what is in his head to the troops.

Zanetti says he is fit and ready, so maybe a bit more of the ol' Madrid? Just one more time? For old time's sake? Aw, who am I kidding. That lineup works. The players know it and know how to work it. If it isn't broken, why fix it? So ya, I expect Rafa to start with the tried and true and go all Madrid on Atletico's ass. Yes, that is what they will be expecting, but really, what choice do we have?

La Gazzetta thinks the starting lineups may go a little something like this:

And all that pace not only on the pitch but on the bench worries me. I sincerley hope that Rafa knows what he is doing with all this "higher defense" stuff... I mean, hasn't he seen how easy it is for our aging defense to be caught out? Because there is no doubt in my mind that if Forlan was on the other side of that one on one instead of Vucinic in the Italian super cup, he would have scored. Great, now my palms are sweating.

A little click over to the Atletico board shows, though, that their fans are just as nervous as I am. Good. Misery loves company. 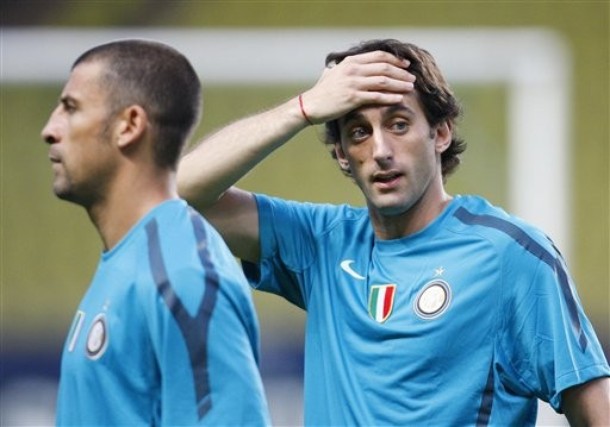 "Dios Mio, does anyone understand what the Mister wants?"

As I have said like a zillion times before, I want this cup. Zanetti wants this cup. Sneijder wants this cup. In fact, what do you bet the whole club wants this cup? (They do) So I say, lets go win this thing. Oh, and to make matters just a little more special, this game will be played on the anniversary of Zanetti's first ever game for Inter. Yep, 15 years ago, August 27th, a young rightback played his first game for Inter: a 1-0 win against Vicenza. Inter has to win... Not just for the team, but for Pupi. No pressure, though.

"Please, please, dont let Forlan get past me."

Dont forget, everyone here for the liveblog, five minutes before the game starts. Oh, and if you haven't already, you only have until this Sunday to get me your entry for my super fantabulous contest (details here). If you dont enter, you cant win.

Just because we can't subscribe to the Inter Channel does't mean we cant enjoy the commercials.