Inter 0 - Atletico Madrid 2: Super? Not so Much

Share All sharing options for: Inter 0 - Atletico Madrid 2: Super? Not so Much 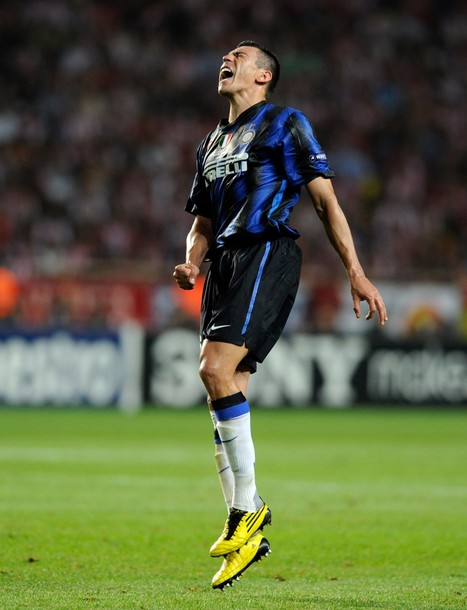 The day before this game I wondered aloud about how I should approach this game. It wasn’t quite a friendly… but for all intents and purposes it was. The results of this game had no bearing on anything else we would do this season and unlike the Italian SuperCoppa, it wasn’t a team that we have a history with, so there wasn’t even that motivation. Worst of all, it came right after Cesar, Maicon, Sneijder and Milito won very prestigious awards. Without knowing absolutely, I bet that there was a lot of celebrating and feeling satisfied – two deadly things for a member of Inter, just ask Adriano.

What I am going to do is try to find some meaning from the game last night for me, assuming that we were trying to play the game as one in which the objective was to win and not use as a training period or an exhibition. 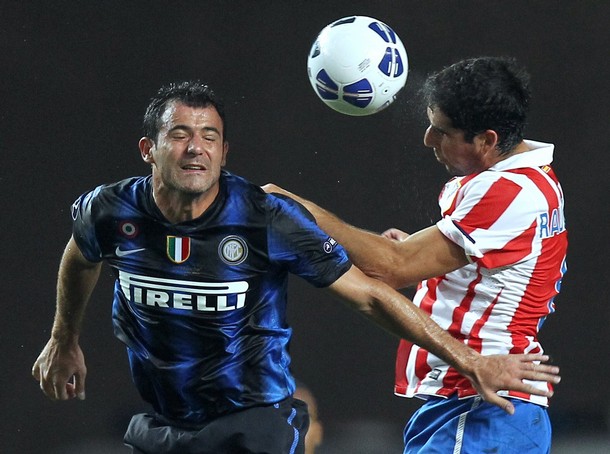 Since 2004 when Mancini took over Inter, the team has been more than passing familiar with the 4312 formation. You wouldn’t know it from last night. Inter still has the perfect midfield personnel for that formation: Muntari, Cambiasso and Zanetti. You can put Mariga in there. You can put Obi in there too. One of the worst players on our roster you can put in the holding midfielder role is Stankovic. It has been done, but I never liked it and I never thought that it was effective. Stankovic has been an attacking midfielder his whole career with the exception of emergency duty. You can put him in the “1” spot as was done 2 seasons ago. He wasn’t great at it but he was adequate. You can put him in the outside of the 4231. The real problem with using Stankovic is that he’s lost a step just about every season he’s been with us. At 32 (as of this September 11th), his skill and considerable guts may no longer be able to conceal the fact that, at the very least, the World Cup took a huge toll out of him. At the worst, he’s finally hit the wall. This isn’t one preseason game talking. Last season it became obvious that he was the starting choice less and less often. 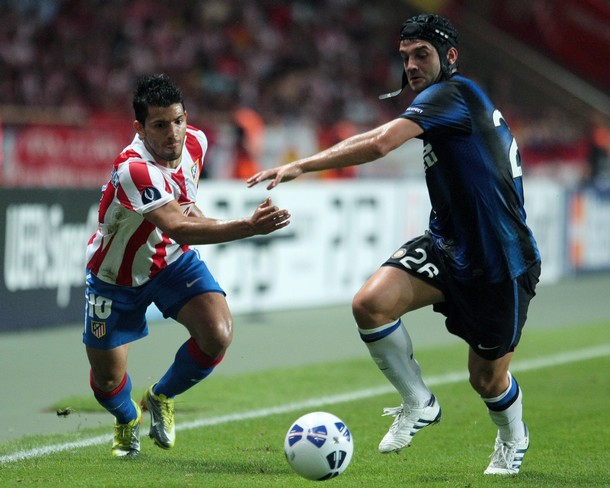 Which brings us to Chivu. Let’s not mince words here. Chivu was awful. He couldn’t pass. He couldn’t trap the ball. He was late reacting to the ball and for someone without great speed that proved fatal on a couple of occaisons. Basic stuff was suddenly too much for him. I am not Chivu’s biggest fan at fullback, but I understand that pickings are slim there. However, it is my firm belief that if Chivu stays with this team going forward, his future isn’t at fullback, it is in the center either backing up Samuel and Lucio or replacing one of them one day. Chivu doesn’t have the speed for fullback. He doesn’t have the technical ability for fullback. He doesn’t have the ability to work in space on his own as a fullback. We have a legend that made his name at fullback. Javier Zanetti may have lost a bit of speed over the last 15 seasons (and he was never a blazer to start with) but he has the other characteristics that Chivu lacks. If it looked like Chivu was having an off night – and he was having a terrible game last night from the opening whistle – I don’t see why that change isn’t made at half time. I didn’t see why it took so long to make a change at all. 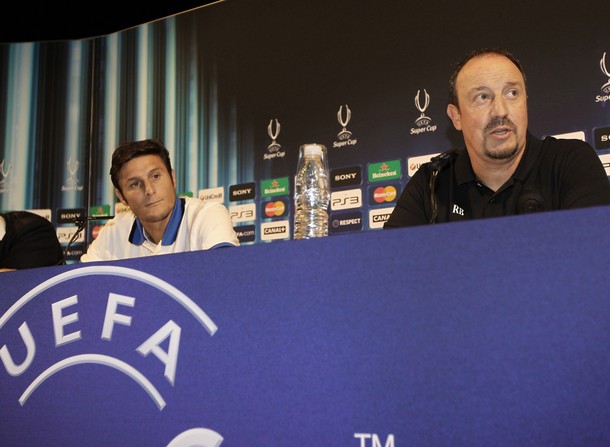 Which brings us to Rafa. First I want to say that as far as I am concerned, the jury is still out on Rafa. I don’t watch the EPL and frankly I don’t trust a whole lot of what the “EPL experts” say about players and managers. So, over the whole season I will make up my own mind about Rafa. I know that there are those of you who have watched him at Liverpool and I respect your opinion on him, but I want to make up my own mind about him.

Anyhoo, I’ll list how I feel about the Manager’s performance:

1. I could have understood how we might have approached this game as a way to get players who weren’t used in the Italian SuperCoppa 5 days before some work. It would have rested the group that played Roma – which I would have argued was the strongest available for the game against Bologna – and it would have allowed us to see how Mariga, Obi, Biabiany and Coutinho can handle themselves in a Europe like match.

2. I also could have understood how we might have approached this game with all guns blazing. It’s the only European trophy that we don’t have. It would have been nice to look good in front of other countries, especially after we took so many honors individually at the drawing on Thursday. Plus, it sends a message, that we aren’t taking life easy now that we have accomplished a goal that eluded us for so long.

3. But we didn’t do any of that. I don’t think that the team prepared as well as they could have if this game was something that they thought they NEEDED to win. And 3 days before we start the most competitive league in the Big 5 Championships in Europe we were pissing away the energy and the morale of the very group that we are expecting to be up and raring to go on Monday Night. It just doesn’t make sense to me.

What's interesting is what he will do now. If this were our old manager he would make a comment in earshot of a microphone to get the attention on him and save the players from having the pressure and glare on their shoulders.

It'll be interesting to see how Rafa handles this. 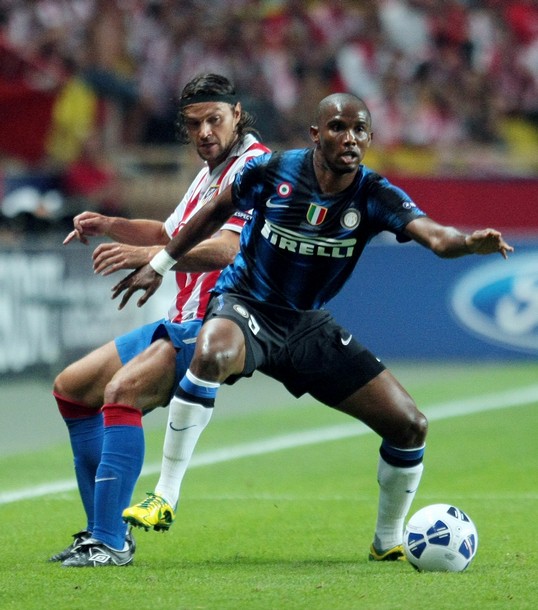 Unfortunately this is the smallest section. The Good of last night consists of one and a half men: Samuel Eto’o and Maicon. Samuel Eto’o was the best player on the field for us last night. He dropped back into the midfield to get the ball when he wasn’t getting service. He took defenders on and he made some very nice chances out of absolutely nothing. If there is one player on this team who made it out of the World Cup with their desire still attached it is Samuel Eto’o, who perhaps feels that he hasn’t been the overpowering player in the last 12 months that he has been for the great majority of his career. Pride is one of the seven deadly sins and it goeth before the fall of man, but it’s a great motivator for a football player.

Maicon, perhaps for the same reasons that Eto’o has come back raring to go, had a pretty good game. He went forward well and was the catalyst for most of the paltry few attacks that we managed to scrape together. I don’t see him as fault for either of the goals but he needs to step up the intensity.

Honorable mention goes to Goran Pandev, who when he came in was actually proactive and able to complete a pass or two. He also managed to hold onto the ball long enough to get a penalty called for us. That it was poorly taken and saved isn’t his fault.

For A Few Dollars More

Inter may have performed a minor miracle and squeezed more than a nickel out of Roma. After months of repeating the price for the centerback/fullback and an offer from at least one other source, it finally dawned on the red and yellow team that we weren’t fucking around. Roma had to double their first offer (and offer half again their best) in order to finally come close enough to Inter’s price. Just for the record, I called it about a month ago. With Burdisso gone and Obinna on loan – again – we have Mancini, Suazo and Rivas to go. At this late date, I doubt that we will have the pleasure of saying goodbye to any of them.

What we should come to terms with is that there may be no new signings this summer outside of Castellazzi, Coutinho, Biabiany and Mariga. These might be it. I am sure that many will be upset about this, but that’s the way it is and we should get used to it. On the plus side, next summer many of you can look forward to many new signings. Unfortunately, next summer I think that I will be too busy saying goodbye to some old friends to enjoy it. 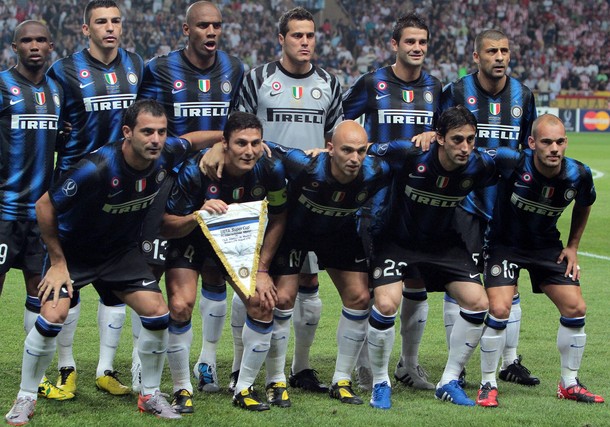