Inter v Dallas FC: Just One More Before Everyone Gets To Go Home

Share All sharing options for: Inter v Dallas FC: Just One More Before Everyone Gets To Go Home 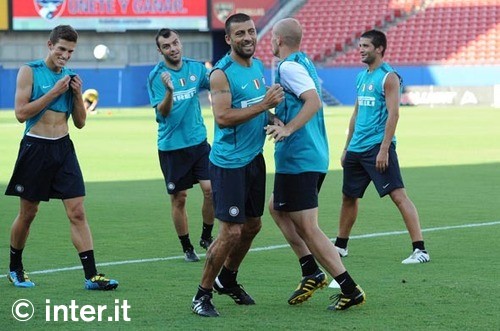 I swear, whoever planned this tour should be slapped. They scrap LA for Dallas? Really? And Toronto? That stadium was half empty. I swear, if Inter came to LA and/or Seattle, that place would be packed out. To the gills. Anyway, Inter's last stop on their North American tour is against the MLS team, Dallas FC. I have to say, this one I want to win. Not that it will be easy: everyone is tired, not really up to full fitness, and what do you bet it will be super hot and humid. Even so, I want to win. Oh, and I am bringing back the Liveblog! Lets hope is still has some magic in it.

JOIN ME HERE 15 MINUTES BEFORE KICK-OFF FOR THE FIRST LIVEBLOG OF THE SEASON! HOORAY!

To my knowledge, this is the first time Inter has played a MLS team (anyone?). FC Dallas plays in the Western Conference of the MLS. Right now, they are 3rd with 27 points, but with the wacky way this league is run, that doesn't really mean much. All the teams have played a different number of games so you cant really compare across. About all I can say about them is they have a cow on their crest (always classy) and they drew the Sounders both at home and away.

I probably should write some stuff about the team here, but come on, this is a friendly and I really dont care enough about them to bother with the research. (bad blogger! Bad!).

Inter trained for a while at Pizza Hut Park Wednesday night. They took time out to sign 100 items for charity before then stopping to interact with all the fans there to watch the practice. Apparently, Cambiasso, Rivas, Maicon and Lucio spent extra time with the fans, staying late to make sure everyone was happy. (Rivas, this may make you a nice guy, but it does not help your defending one bit.)

Balotelli did find his way to Texas with the rest of the team, but I will bet money that he doesn't suit up tomorrow. Hopefully the team wont be as disorganized this game as the first half of the last. I mean, I am all for babies getting a run out and I know that the WC players still need some time to get into shape, but I still dont really have an understanding of how Rafa is going to run things. (Well, besides him not being a manager and all.) That worries me a little. Funny, I never felt this way about Mourinho - must be the dimples. Rafa, though, I think he will have to earn my trust.

No movement on the market today. Once again, an "important day" for Burdisso came and went without any sort of resolution. Real Madrid and Manchester City are also still trying to low ball us but the club is standing firm. I just dont see the issue - here is the price, take it or leave it. And yet they dicker. And my blood pressure rises.

Oh, and all this Sculli hooey. Seems to me, if Branca says no, then it isn't happening. No matter what Gasperini says. Right?

I mean, the guy is 29 and... well... sort of average. La Gazzetta thinks Inter want him to round out their CL list (he is home-grown Italian), but I just dont know. Isn't there anyone better? ANYONE? I just dont think he is a viable option to replace Balotelli. But then what do I know. Look how skeptical I was of the whole Milito/Motta deal. I will fully admit, I could be wrong about Giuseppe as well. Rumor is, Moratti wants the market done and dusted by the CL Group Stage Draw (August 26) so we have approximately 3 weeks of torture yet to endure.

Alright. I know this is short, but I will see you all here tomorrow at game time for our liveblog. Here, on this post.