Share All sharing options for: INTERrelated Odds and Ends 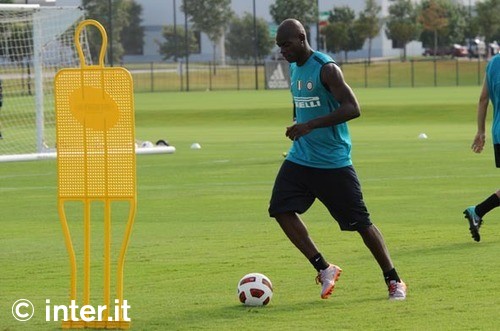 The squad will be returning to Italy this weekend. They will have a couple days off, then will start preparing for the Super Cup in earnest. Oh, there is this horrid little mini-tournament game thing they have to play in Bari first - the Tropheo TIM - but then it will be gettin' down to business time. Oh, and lookie who finally showed up for training...(^) 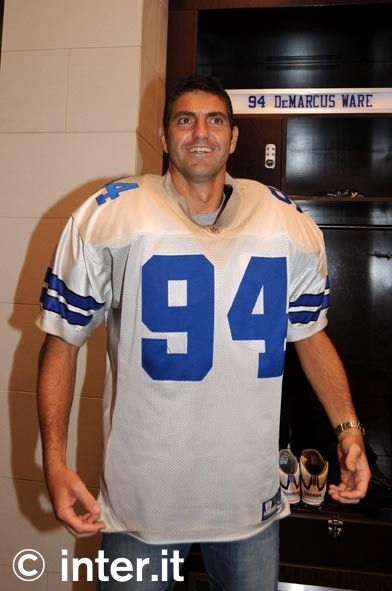 Why does Orlandoni always look like he is moments from shouting "brains" and lurching around the room?

The team seemed to enjoy themselves in Dallas. Some of club staff (and Mrs. Moratti) took a little trip into town and visited the stadium where the Dallas Cowboys play (it is brand spanking new, state of the art, and just what Inter needs back in Milan). I guess there was a little dress-up included in the tour. 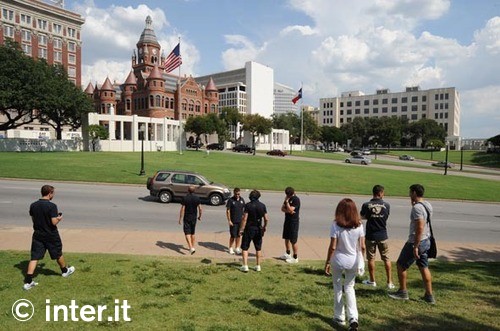 I dont know, this just seems like a really strange place to go on vacation.

Back at the training center, though, things were getting frisky. First, everyone got their very own cowboy hat. 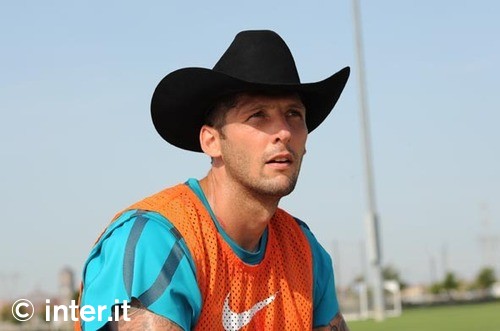 I wanna be a Cowboy baby, Ridin' at night 'cause I sleep all day, Cowboy baby .

Then, there were team building exercises. I love team building. Plus, it is a chance for Marco and Deki to express how they really feel about each other without being made fun of (I do wonder how Chivu felt, though. He must have been so jealous). JC looks a little sheepish about the whole thing. 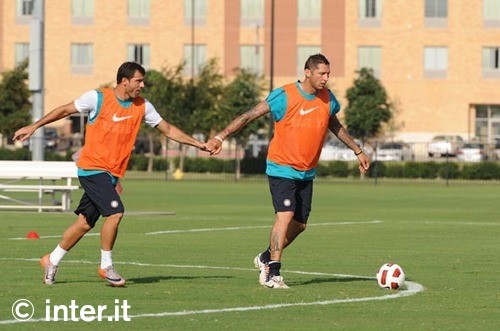 This photo actually made me giggle out loud when I saw it - at work.

It is not quite as fun as Mou making everyone carry their teammates piggy back, but it is a start. (I know he did it. I didn't just make it up in my fevered brain. Too bad I cant find the photos now.)

Anyway, as I said, the team will have a couple days off then start work for the next (and last) preseason friendly, the Trofeo TIM.

First, I hate the Trofeo TIM. It has a stupid format plus someone always seems to get injured during it. Last year it was Cambiassio, the year before, it was Materazzi. It is cursed, I tell you. This year is especially ominous as it falls on Friday the 13th. We already have like 5 of these things - maybe lets give someone else a chance. I am always hearing how wonderful Roma is - perhaps they could take our place this year. Really, anyone or lets just forfeit. The game is going to be held in Bari - maybe the team could go to the beach instead of play. I bet gelato could even be worked in there somewhere. I should totally start a petition or something. Anything. Just lets not play this "mini-tournament" of doom.

Why does Maicon insist on torturing us this way?

After that, Inter has three games (real ones, mind you) in 9 days. Rafa was recently asked about this and his answer was sort of worrying:

In 9 days, from the 21st to the 30th of August, Inter must take on the UEFA Super Cup against Atletico Madrid, the Italian Super Cup against Roma and the league debut at Bologna. It is possible to arrive at these three stages with the true Inter?

"We will try. It will be a strong squad, but not the squad we all expect."

Wow. That is not an entirely calming statement right there. So, which game are we going to blow off by fielding babies and crapsters like Mancini? 'Cause I think we should really win all three.

Or do you suppose that means there will be some new faces.... Nah, how would Rafa know? He is the coach and in no way involved in transfers. Of course, he has come out and said that he really hopes that Inter keep Maicon around ("...he is clearly a player that we want, a very important player for us). Not so much for Balotelli. Our coach seems pretty well resigned with him going off to Manchester City. He had no such kind words for Mario. That boy is gone, solid gone. 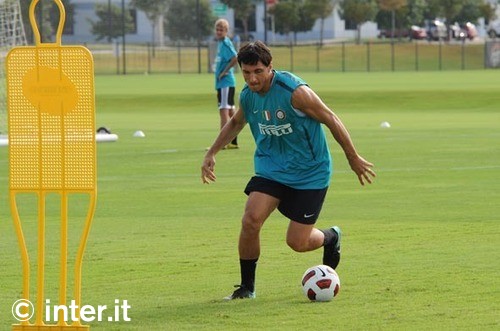 You dont suppose.... I mean... The club isn't thinking of keeping Nico, are they? Oh please no.

In other market news, there isn't any. Well, in a round about sort of way there is. It seems Roma made 1.5 million of the sale of Guberti so may now finally have the cash for Nico.

In the "Where are they now" file, we find Jimenez in a really bad place. He has left Ternana's training camp and is taking his family back to Chile. He says he is suffering psychologically and is going to sue Ternana because they will not work with him to find another buyer. Jimi's agent says there have been offers from other clubs but Ternana's president wont even return the agent's calls. They were like this before - with Inter. It is all around a bad situation. I sincerely hope this works out in some positive way for him. The poor guy. I still want to know where the heck a C1 team came up with over 3 million euro in the first place.

Oh, and we have our opponent for the Club World Cup: Sport Club Internacional of Brazil. Yep. Inter will be playing... Inter. Classic.

Alrighty then, that's about it. The boys are on their way back Italy and will resume training on Wednesday. 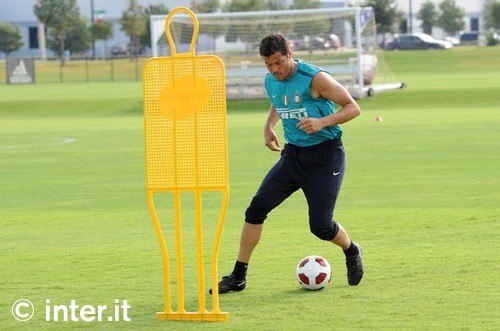 Oh, and look at this cool thing. I have no idea how it works, but I like it!