Share All sharing options for: Cesena v Inter: Going to the Hippocampus House 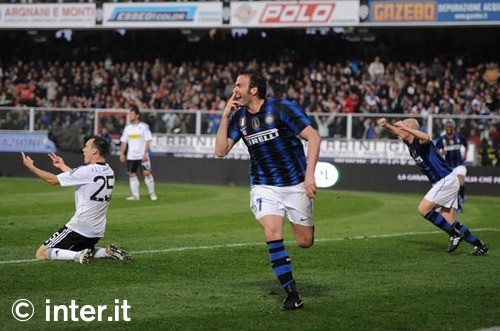 Ok. So the title is lame. Sometimes we cant just be all cleaver on demand (dance, monkey, dance). Sometimes the wit just doesn't come and you end up with sad alliteration. So anyway, Inter go to the Stadio Dino Manuzzi in Cesena to see if we have really turned or corner or if it will be another schizophrenic break (like against Novara). Plus, if we get some lucky breaks in some other games, a win could push us up to fifth. Considering where we were last month, I will take that. In a heartbeat.

What: Cesena v Inter
Where: Not Milan
When: Very early. Sunday, 3pm local time (6am pacific, 9am eastern)
How to watch: Only ESPN3 here in the states. Our neighbors to the north (Canada) can watch it on The Score. Other countries can find a channel here. For the rest of us, find a stream: Rojadirecta, Ustream, and ATDHE.net

I think we can all agree that there is a fair amount of pressure on the team to win this game. I mean, for the first time in a long time, Inter is playing a team with fewer points and a worse goal differential. What's more, we have never lost this fixture. Granted, the sample size is minuscule (only 11 games) and a third are draws (4), but unbeaten is unbeaten. Last year this game came down to five stoppage time minutes and one Giampaolo Pazzini.

It was a crazy, never-say-die sort of game that helped cement our second place finish last season. As a matter of fact, I called this 2011 Cesena game out as one of Inter's games of the season. Not for the scintillating play or the massive number of goals (it finished 1-2 for us), but for the attitude it conveyed - for the heart it showed. Basically, this game to demonstrated what last season was all about for Inter: a sucky start that was overcome through dogged determination, force of will, and the idea that you play every second of every game as hard as you can until the whistle blows. Inter just plain didn't give up. And I like that. Hopefully someone at La Pinetina played a bit of this game to the squad to help them remember that feeling.

Highlights:
(ugh, that's right, they had their field mowed in circles like they have an insane groundskeeper.)

Cesena is not doing so well this season. In fact, I would say they are in the poop. With only 12 points, they sit third from the bottom and I bet they are starting to have those relegation related stress dreams at night. They started the season with a four-match losing streak (sound familiar?), managed a couple 0-0 and 1-1 draws, lost a couple more, until finally winning a game in late November (against Bologna). After that, though, they have been steaming right along: except for a loss to Juvenuts, they have won four of their last five (including a Coppa Italia win against Gubbio). They even managed to beat Palermo last week at the Renzo Barbera. So I think they may be finally finding their feet.

As expected, Adrian Mutu is Cesena's top goal scorer right now. With four goals, it isn't much, but it is more than anyone else on the team (Candreva, Parolo and Guana all have a goal as well). Yes, you read that correctly, Cesena only have 7 goals in the Serie A this year (we have 17). I tell you, it is looking grim for the poor seahorses. 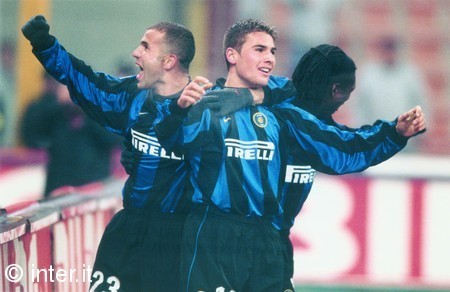 Awww, look at the baby Mutu. What a cutie patootie.

Adrian Mutu is another who has passed though Inter's hallowed halls back when he was a mere slip of a thing fresh from Romania (before the Chelsea troubles and the diet pills) and he has always been one of my favorites (despite his waiter-punching tendencies). He is coming up on his century of goals in Italy (he has 99 right now) and I think we all see the balance of him scoring his 100th against the team he scored his first for (watch it here). Adrian predicts Cesena will win 2-1 and I dont doubt for one minute they will fight tooth and nail for those 3 points on the table.

As an aside, when reflecting back on his time at Inter, who is that he says helped him the most as a young player in a new country? Javier Zanetti, of course. I simply cannot conceive of an Inter without him at the helm. 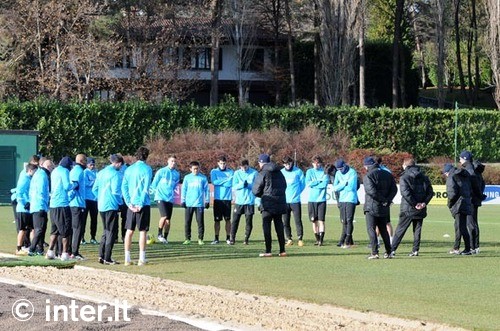 Listen well, boys, 'cause we really need to win this one.

Maicon's back and you're gonna be in trouble (Hey-la-day-la Maicon's back).
You see him comin' better cut out on the double
You been spreading lies that the team was washed up
So look out now cause he's comin' after you
He's been gone for such a long time
Now he's back and things'll be fine
You're gonna be sorry you were ever born
Cause he's kinda big and he's awful strong

Not only is Maicon back, but so is Ranocchia, Forlan, Coutinho, and Stankovic. It looks like only Chivu and Sneijder are still out (both are on leave). The Mister was a bit cagey about lineups. He would not say whether or not Forlan would start, saying only "Remember when I said we had lost, that we would have him back for the new year?" Which makes me think that maybe he will not after all.

I suspect CR will go with a 4-4-2 as it "is helping us to cover the field. Ricky Alvarez can play on the right and I can see him working harder in training, so the ‘hammering’ I give him is taking effect.”

So, that leaves us with a little something like:

For those of you who are not impressed with the Milito Pazzini paring, I'm sorry but I just dont see a way around them taking the field tomorrow. There is also a chance that Zanetti will start in front of Maicon and Coutinho on the left (like against Fiorentina). I guess we will just have to see.

Personally, I am torn. I like Coutinho for his vision and creativity but I think Naga (and to a lesser extent, Maicon) needs someone like Zanetti covering defensively for him. We all know that Cesena will play a highly defensive game, hoping to score on the break... we are used to teams playing that way against us. The trick will be to stretch them defensively and between Maicon and Naga, I think we may just have those wings covered. I guess for me, I would prefer a different formation but Ranieri seems wed to this 4-4-2. Which is a bit of a shame. Maybe after the break we will see a little change-up but for now, CR seems bent on our back-to-basics strategy. I guess so long as it comes up with wins I can live with that. I think I will by cautiously optimistic about this game. I think we can win.

Here is where I ususally give my pep talk but I think I am done with those for a while. Everyone knows we need to win - that every single point is precious if we have any hope of making anything of this season. Besides, all those cocktails I had with lunch while Christmas shopping are really starting to catch up with me.