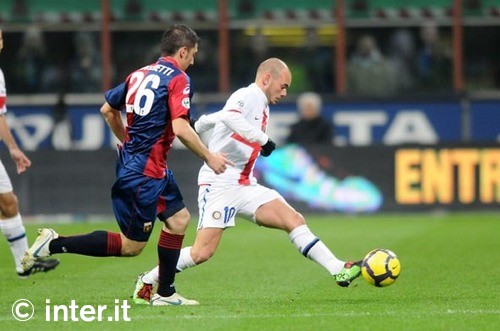 Genoa come to town at a dicey time for Inter. We have managed to haul ourselves into second place and suddenly, first doesn't seem so impossible. If Juve managed to keep there wits together and take some points off Milan... Well, the mind fairly boggles. More than anything, this will be a game that Inter wants to win. In Serie A, though, there is no such thing as an easy game. Genoa want those points every bit as much as Inter does, and, good relationship aside, will be looking to put Inter in a world of hurt. What do you bet they are more concerned with their own standing than with ours? What do you bet they dont even care if we win this next scudetto or not? Typical.

What: FC Internazionale Milano v Genoa Cricket and Football Club
Where: San Siro, Milan
When: Sunday, March 6, 3pm local time (6am pacific, 9am eastern)
How to Watch: Live on Fox Soccer Plus, ESPN3.com, RAI, and these other channels (delayed 8 hours on Fox Soccer Channel), or find a stream (MyP2P, Rojadirecta, Ustream, and ATDHE.me).
Liveblog: I know it is early, but Kirby is dedicated. I will bet that yes, there will be a liveblog.

(Luckily for you all we have Kirby, because 6am and Johonna do not get along at all)

Genoa is a tough nut for Inter, even at home. Sure, we win most of the time (34 times out of 57 games) while outscoring them 2:1 (GF-113; GA-54), but 40% of the time, Genoa takes points off us (11 draws, 12 losses). At a time like this in a race like this, dropped points are like daggers to the heart. To add insult to injury, the last two times Genoa came to Milan, the games ended in goalless draws. Before that, we beat the snot out of them (4-1), but that was years ago now (am I the only one who has been feeling a little Mancio nostalgia recently?). Nope, somehow, Genoa knew how to shut out Mou's Inter so lets hope Leo has some new tricks up his sleeve. He already bested them once this year in the Coppa Italia (we won 3-2), but that was then and in a different competition. Still, it is a promising start.

What not to do from last year:

Genoa have had a bit of an up and down season. They sit dead center of the table at 10th place - which doesn't sound so bad, but it is 11 points off the pace for a European spot. They have a pretty good defensive record with only 27 goals allowed (that is 3 less than Inter), but, with only 25 goals scored, seem to be lacking a little something up front.

They had been on a bit of an upswing, with a solid derby win and an epic 4-3 comeback against Roma, only to be laid low by Catania last week. Most importantly for Inter, the game saw a flury of red cards meaning Criscito, and Floro Flores along with Coach Ballardini will be suspended for our game (Carlo Regno will be on the bench). Veloso is out as well, but that was for an earlier infraction. While they can probably live without Floro Flores (he only has 2 goals this season), Criscito will be a blow for thier defense. He has played every Serie A game this season and is clearly someone Ballardini relys upon. (Word is, though, Criscito is on his way to Zenit. Or so says La Gazzetto).

But it is not all gloom and doom for the the Grifoni, their treatment room is slowly emptying out and it looks like only our boy Destro will be unavailable due to injury for this game. Milanetto is just coming off of injury, though, so may not be ready to start.

Which is just about thier best. For some reason, all these rumors about Kucka going to Inter or Milan this summer have been popping up. I have no idea why, but he may bear watching anyway.

Maicon is feelin' fine and ready to score.

US
Leo has calledup 21 players:

Ranocchia is a bit of a surprise as he trained separately most of the week - I hope the kid isn't being pushed too hard. Milito and Cambiasso are still injured, although both are hoping for a Bayern recovery. What does this mean in terms of lineups you may ask? Well, Leo has used five formations in his short time with Inter so you never really know. La Gazzetta thinks he will use one of his favorites, the 4-3-1-2, especially as Cambiasso is out. If that is so, we may see:

Maybe not our best, but getting close to it. I wanna say that I like Thiago Motta better on the outside, but clearly, Leo feels differently. He was asked about it in today's presser and Leo feels that any one of TM, Stankovic, or Cambiasso can play in the center in front of defense. Right now (and based on his game against Bayern), he feels that TM in that roll is better for both the offensive and defensive phases of the game. I guess we will see.

Today is Leo's two month anniversary with Inter (no gifts are required, but if you must, here are some ideas. For the team, the gift of three points never goes out of style). He has had a good start, but many pundits feel his Inter lacks continuity. Oh, and that we are slowing down a bit. I wonder if anyone has noticed that Inter have played something like 15 games in two months (not including international friendlies) and that last week was our first without a midweek game since Christmas. I think that a little slowdown after a gruelling schedule like that is to be expected. Yikes.

Leo's main points in today's press were that:
• Inter are still hungry for winning (duh)
• More than anything, the team needs continuity (duh) and the week off helped with that.
• Just because Pazzini didn't score a goal in the last game doesn't mean there is anything wrong with him, and
• He wont be thinking about today's Juve - Milan result. The only thing that matters is Inter's performance against Genoa.

Oh, and he enjoyed his time playing in Japan. But that doesn't really have anything to do with anything. 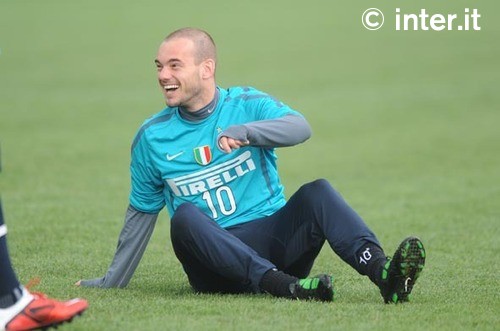 In the end, the only thing Inter can control is their game. As such, instead of expending energy on other teams and their results, lets just concentrate on ourselves. Milan have assembled a good team - they will fight for the very end. Ditto with Napoli. I am not trying to rain on anyone's parade - it is possible that Inter will win the championship - but much can happen in 11 games. Let's just worry about Genoa before we start planning the party in the Piazza del Duomo for #19.

Everyone, light a candle for the Calcio Gods, throw some salt, say a prayer - whatever it is you do, do it.

A little preview of what will we see from Maicon?