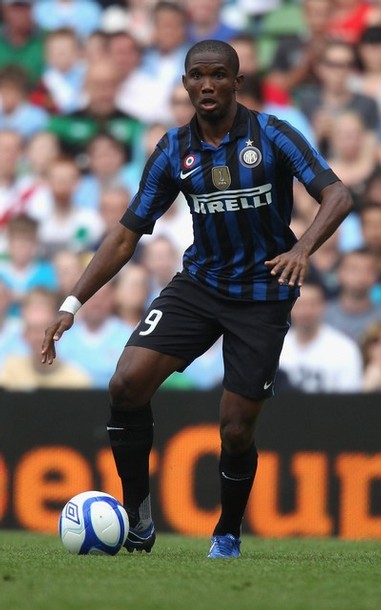 I am sure that we are all waiting to see how much if anything Inter will get for Eto’o – assuming he’ll go to Russia. I, for one, would have been happier if these talks were starting in July instead of August. The numbers being bandied about are thus: €30 - €40 million for us and 15 million per year for Eto’o. Given these numbers I can’t fault the team for selling the 30 year old forward and I couldn’t blame him for going.

As of last September, according to GdS, Eto’o was making €8 million per year. And let’s not for get that Eto’o was a €20 million makeweight in the famous/infamous – depending on which team you follow – deal that saw Ibra off to Barcelona to *coughcough* win a Champions League Final.

So we are talking about capital gains for everyone here plus serious wage redemption into the mix. Depending on the news source you subscribed to, almost €50 million could be placed into the kitty for use as early as this transfer session which still has over two weeks left. I think that we all remember the club transforming that Branca was capable of last January with the proceeds from Mario’s sale, so January reinforcement isn’t off the books either.

However the big question that I think many are asking themselves is what does this sale portend, if anything? Is this a capitulation of any and all possible future glory a la Udinese-style selling? Is this just an attempt at financial correction in a much changed financial atmosphere from 10 years ago when Italian teams were all spending like drunk sailors? Or is this just an opportunity for good business that can’t be passed up?

About two years ago, I made the claim that football teams couldn’t be considered businesses in the strictest sense in that the goals of the two entities – a team and a business – were diametrically opposed. A business is meant to make profit at all cost and the way to do that is to bring in more money than you spend. The money brought in is much more important than any other measurable factor.

A football team’s goal is to win and to do that it must spend money on players despite the total. The money is a secondary concern than the wins and the losses – which are directly affected by how much you spend on players. Those players and the result of the team on the field had, until FFP set in, much more importance than the financial health of the team.

When I wrote this article two years ago I got some resistance from JuBentus supporters whose team had just finished in the top 3, posted a profit of €6 million and told me that the winning and making a profit weren’t such hard things to reconcile. I wonder if they would say the same thing today – two seventh place finishes and almost two hundred million Euros spent on players, player loans and financial assistance from their parent company later.

Anyhoo the point of this whole mess is to determine what to make of Eto’o’s sale – assuming it’s going to happen… and I expect it to, unlike the whole Sneijder thing. Let’s look at the each of the questions that this sale could portend – if it portends anything at all - and see which one makes the most sense.

Has Inter become a selling club aka Are we now a “small club”?

Let’s face it, what we are worried about is whether or not we are going to be the type club where we will need to sell our stars every year or so. What places like Goal.com or Football-italia.net (or any JuBe or BBilan site) are hoping/peddling is that we are going to do exactly this – drop prestige and ambition to become a “selling club”. And to be fair, we have been selling a star every year for the last 2 seasons now, so the question, though mean and petty, is pretty valid if one conveniently forgets the second part of each transaction.

Udinese is the prototypical selling club. They buy South American and Eastern European youngsters by the truckload every year. These aren’t my words, they belong to Tim Vickery and he’s said them on more than one occasion on BBC’s World Football Phone-in. They train them up and several, through the law of averages, become good enough for the squad and once every decade or so they hit the jackpot and sell a young superstar for a bucket of cash… the majority of which goes into the bank and a slight fraction of which will be reinvested in another boatload of youngsters again.

This isn’t the pattern that Inter have set with their sales. Selling Ibra offset the cost of buying Milito, Motta, Lucio, Eto’o and Sneijder. Selling Mario offsets the cost of buying Pazzini, Nagatomo, Castaignos, Ranocchia, Alavarez and Jonathan. And selling Eto’o will offset the cost of several other sales. Inter are reinvesting their sales into transfers that will help the club immediately unlike a traditional selling club. Is this model a successful one to help the team win titles? Well, that I don’t know. I don’t think that it’s helped Arsenal at all and I stated as much in a previous article I wrote on this very topic.

Is this just an attempt to align Inter’s finances with the realities of the current market?

The middle ground is a hard one to hold onto. Those who are beneath you are looking for ways up and those above you know that they have a serious advantage. Inter aren’t the biggest (richest) club in Europe and the money scene in Italy seems to shift every time an owner/president gets an attack of pride.

When Inter spends it’s reported as a problem because they are trying too hard to buy a title and when they try to be responsible it’s reported as a problem because they are weak. It doesn’t help any that our two rivals have extensive interests in the media that are critical to us. So there is always going to be some exaggeration either way that we just have to be aware of – you just have to be skeptical of everything you read and you have to use your own head to try and logically understand what’s actually happening.

Inter have been cutting salary for a couple of seasons now. If/when Eto’o leaves, and assuming Inter doesn’t sign anyone else to a high wage, Inter’s highest wage earners will be Cesar and Milito at €4.5 million. Both don’t figure to be at the club a whole lot longer – a handful of seasons for both at most. Last season, Inter had Serie A’s second highest wage. This season, it’s my opinion that Branca and company are looking to drop another place on the list.

The indications for the last several seasons has been that Inter's wages are trending downwards. I expect next July to see another big drop as almost our entire defense has contracts up and we are being linked with some young defenders like Andeolli last winter and Vertonghen this summer.

In addition to the downward trend in wages Inter has been buying youngish talent that is on the verge of their prime, cheaply. This is the action that has really started all the tongues wagging this summer. Inter aren’t going to spend a lot for anyone this summer and when compared to teams on either side of their last season’s position that have been spending it looks weak. And it might be. Last season’s fiasco of second place was blamed by me and others on Inter’s lack of spending in the summer. But Inter’s “failure” last season netted a 2nd place finish, a Coppa Italia and a quarter-final finish in the Champions League.

Here’s where I am with this supposition: if we can be competitive on the highest levels then I am okay with us losing the top spot every now an then.

Is this just too good a business opportunity to pass up and doesn’t mean anything?

This is the boring option, but it’s the one that Occam ’s razor likes. There are no assumptions here, just a business deal done in a vacuum. Eto’o is a 30 year old forward who had knee problems in the past and has multiple extended seasons one after another in his recent football life.

When Inter dealt Ibra to Barca Eto’o was valued at @ €22 million. If the rumored 40 million transfer fee is correct, then we have paid for Eto’o’s transfer from Barca and his cost of both seasons usage. Like Mourinho’s “transfer” to Madrid, we would have essentially paid nothing for his being on the team.

So this would, at its base, be a good business deal. However, as I have noted above and elsewhere, Inter – or any football club for that matter - isn’t exactly a business. I don’t think that we will know if this is a good deal until we see how things stand in January… again.