Share All sharing options for: Sweaty Palms, Tension Headache, Nervous Stomach... It Must Be Derby Time 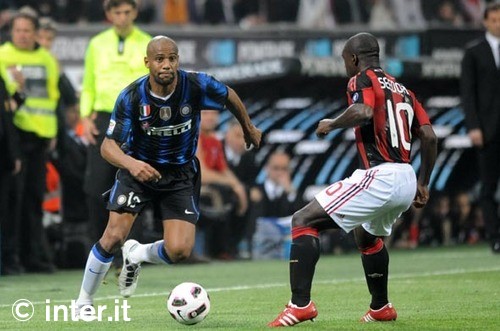 Yep, it is already that time of the season where we pit ourselves against our arch nemesis: A.C. Milan. And I am a wreck. I know, there are those of you full of optimism and belief, but a quick look at the table, statistics, and a bit of reflection over this season makes my stomach roil. Dont get me wrong, I know our boys have it in them to slay the red devil, but the question is, do they know they have it in them? And as if there wasn't enough stress over this game as it is, throw into the mix that every single pundit has been saying that if Inter dont win this game, their season is over, dead, kaput, done. I think I may need to indulge in a little self medication before this weekend is over.

What: The Epic Battle of Good vs Evil, Light vs Dark, Everything that is bright and shiny v A.C. Milan
Where: The center of the football vortex of doom, the San Siro
When: Sunday (tomorrow, gulp). 8:45pm local time. 11:45am pacific, 2:45pm eastern
How to Watch: Well, ideally go to the stadium but barring that, every sports channel worth their bandwidth is showing this game. Or, find a stream here: Rojadirecta, Ustream, and ATDHE.net
Liveblog: I am sure you would have to tie Kirby down to keep him away. Be here 15 minutes before kickoff.

A quick look at our history with our cousins shows that, overall, we are pretty evenly matched:

Even if we just look at Serie A games, the numbers of wins and losses, goals for and allowed are uncannily close:

Last season, Inter and Milan were in a similar situation come Derby time: Milan was ahead in the standings, Inter was mounting a comeback, and much of the season depended on the three points up for grabs (sounds familiar, yes?). Well, last season it didn't work out too well. I had to sit there while our boys ran around like petulant chickens with their heads cut off (with Sneijder as the King Petulant) and Seedorf reminded the world that he is (or was) actually a very good football player. Then I had to endure the trams full of singing Milan fans on the ride home and the red and black banners jubilantly displayed around the city for the next few days. And it rankled. I dont want to have to go through that again. Ever. So, no video of it here. Ever. Watch this instead.

If you would like a more in-depth rundown of the the Inter-Milan relations over the last 15 years, you should watch this video. Sad for us Inter fans - those guys really do win almost everything - but entertaining none the less. Another great source is the BBC special about the Derby della Madonnina called A Night at the Opera - Inter Milan v AC Milan. It talks to fans from both sides, about the history of the match and what it means to the city, and visits the San Siro for our great 2-0 home win in our treble year. A great way to spend 20 minutes (and it is in English!). 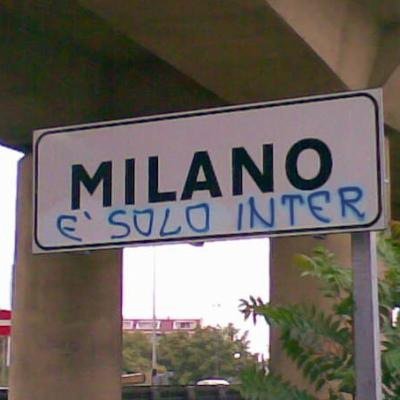 "Milan is only Inter."

So not going to do it. Check out Gianfranco's blog for the Milan side of this game. Or, you could go the roughly 100 million other preview for this game (like this one, or this).

Gattuso is out (with a terrible eye infection, yikes), as is Aquilani (I'm always surprised when he's not injured). Taiwo and Seedorf both have a fever and may or may not be available, while Thiago Silva reportedly has a slight muscular problem and may have to pass a late fitness test. The thought among Inter fans is, though, that this last piece of news is pure pre-derby mind games. I would expect Thiago Silva is just fine. Other injured and unavailable players include Flamini, Cassano, and Yepes. 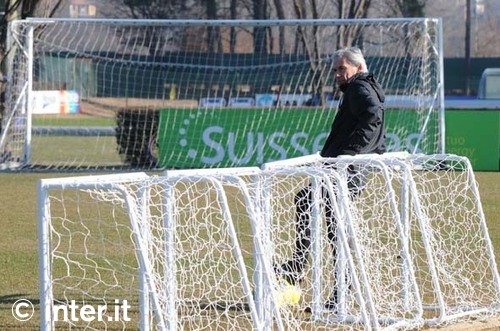 The picture of concentration. How many derbies have those piercing blue eyes seen?

CR has a practically a full squad to choose from (FINALLY)

Well, almost full squad. Poor Deki has another injury, this time it is his achilles tendon. He must be devastated. Julio Cesar is said to be suffering from a bit of a back problem, but he has been convened and Ranieri seems positive about JC's availability. Whew. 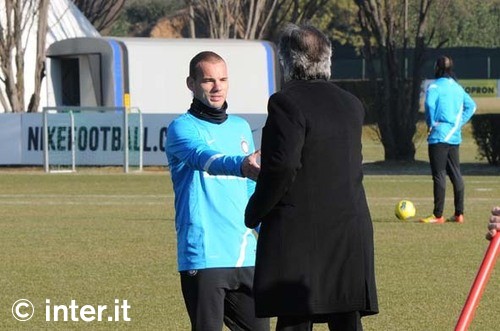 As for formations, CR's problems have now switched from how to fill the gaps to how to accommodate all the talent. There are indications that CR has been experimenting with a 4-4-1-1 that includes both Sneijder and Alvarez but it is unclear whether Sneijder is really match fit, and if so, how many minutes he has in his legs. Still, CR is quite keen on having a good midfield, saying:

"The midfield has always been the key area where you need to have the best strategies and the best players to ensure that your team wins."

Whether that means Wes will play is yet to be seen.

As for the rest of the line-up, I hesitate to predict. I think Milito and Pazzini will start - they seem like they are finally clicking and working out who play where. They are certainly our most in-form strikers right now. Hopefully Forlan will make the bench at least.

I suspect that Samuel and Lucio will start in defense, with Maicon and Natatomo, but... Ranieri did take time today to express his love for Chivu, saying that Chivu is a player he likes very much and even wanted him when he coached at Chelsea (I cant find the link, trust me, he said it). Plus, I bet that Ibra could just step over Nagatomo without so much as breaking a sweat. So you never know, Chivu could start over Naga. Certainly it would seem like old times with a back line of Maicon Lucio Samuel and Chivu. Old, good times. 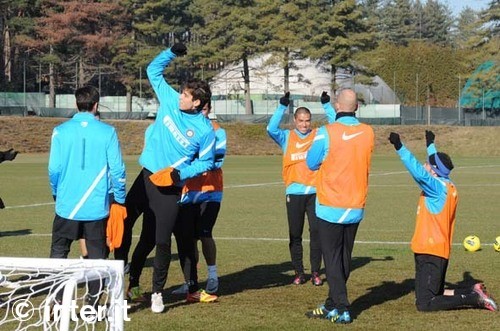 Let's bring those good spirits to the game tomorrow.

So, that just leaves the midfield and, as I said, there are too many questions (and too much talent) for me to guess at that. Whatever CR chooses, I hope he is not blowing smoke when he says that Inter are ready for Milan. I could really use a win tomorrow.

Ok. Let's be real. Milan are the favorites to win this game. They are leading us in every possible way this season: more points, more goals (more penalties), less goals allowed... everything. I tell you, this season has been one step up the horror scale from dental surgery for Inter. And everyone, all the journalists, all the pundits, the whole football sporting world, has been more than happy to point that out to us every chance they get. At this point, painful is a bit of an understatement.

We can turn it around.

A win on Sunday may not move us up in the standings (that depends on Lazio and Atalanta as well) but it will show that Inter has finally put that terrible start behind them and are ready to make a serious challenge this season. Plus, there is that street cred thing on the line. And, as much as everyone says this game is pivotal for Inter, Milan have just as much to lose. Juve is snapping at Milan heels and, as the favorites, a loss will certainly put a dent in their shiny Champions of Italy armor.

Ok, so the guy is growing on me. I am beginning to believe.

Realistically, like Ranieri, I just want to see the boys go out there and play with heart. To bring all thier passion to the pitch and bring the joy. To at least make Milan work for any points they take from us. If we play our best and still lose, well, at least we can be proud that we gave it our all. I have a sneaking suspicion, though, that if the Inter players really do give their all, if they leave their blood, sweat, and tears on the pitch, Milan will come away empty handed.

So come on, boys, now is the time to bring it. Let's play our game and let the football to the talking. Three points or bust!

and my favorite chant (it is so darned catchy)