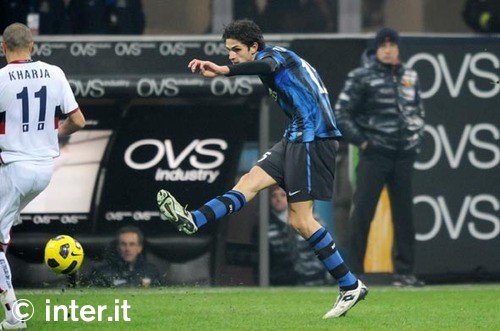 I would say let's just blow this off, but it could very well be that this will be our only real opportunity for a trophy this season. Plus, you know I never like to back away from a fight. If Inter are in it, they are in it to win it.

What: Inter v Genoa, Coppa Italia Quarters
When: Thursday, January 19, 9pm local time (Noon pacific, 3pm eastern).
How to Watch: Live on GolTV or one of these channels. Streaming on ESPN3 or try one of these sites: Rojadirecta, Ustream, and ATDHE.net
Liveblog: It depends on the weather. Check back near kickoff and we will see what we can do.

First, lets take a little look at the bracket to see what we are or will be up against. Basically, if we make it though Genoa, we get to take on Napoli, before moving on to one of the big boys (Lazio, Milan, Juve, or Roma). But one step at a time.

Inter has had to go through Genoa two out of the last our last three Coppa Italia campaigns. Usually we get to play Genoa at home, but back in the day when we did things over two legs, we made a couple excursions to Genoa as well. And we haven't lost a single one. Or drawn. That's right, Inter is unbeaten against Genoa in the Coppa Italia.

Last season it took a brace from Eto'o and a surprise goal from Mariga to get through to the semi's (beware, watching the video below may cause extream bouts of uncontrollable nostalgia for Eto'o):

Genoa is shaping up to be a pretty ok team. While solidly mid-table, they have been recovering injured players and actually managed to beat high-flying Udinese last week. Oh, and they have a new coach. We all know what a bump that can bring to a team. As for the recovering players, it seems Marino has already indicated that he will rest players ahead of this weekend's fixtures, saying: "we cannot force some players."

Frey, Palacio, Veloso and Gilardino have all been left home. In addition, Antonelli, Dainelli, Kaladze and Bovo are all out injured. Who does that leave, you might ask? La Gazzetta is predicting: Lupatelli; Mesto, Granqvist, Rossi, Moretti; Biondini Seymour, Constant; Sculli, Pratto, Jorquera.

Lupatelli has yet to play a game this season and Sculli has recently returned to the club from Lazio. He has had 2 goals in 11 games for the Romans. Most of the rest of the projected squad have had little game experience this season. But I think that means they are chomping at the bit to prove themselves. 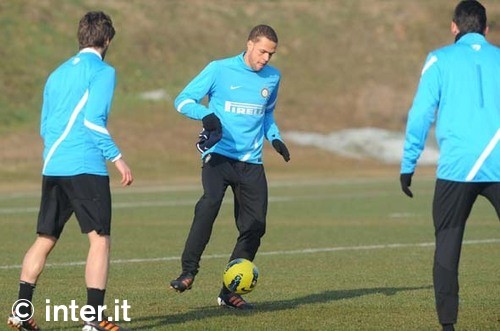 Come on Babies, make us proud.

CR is also going for a bit of a turnover:

Forlan is out with a thigh strain and is looking at another month in physotherapy. He just cannot catch a break. Coutinho has lower back pain while Stankovic has that tendon thing. Samuel, Juilio Cesar, and Pazzini had individual training today, but no word on any potential injuries. I think their sitting this one out is precautionary. At least I hope so, cause these injuries are getting ridiculous.

But that is not to say that Ranieri is blowing off the Coppa Italia, saying: "It matters a lot. Inter won it last year and the year before, so it's important." 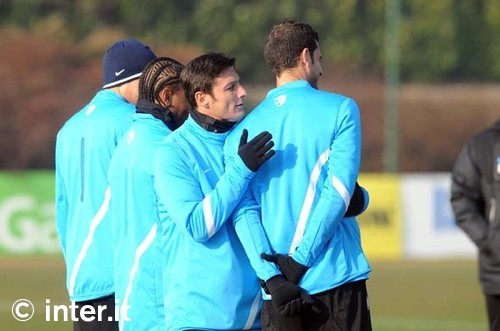 "Next time that goal will count."

I guess we will see if that is true or not by who he starts tomorrow. Will he stick to a 4-4-2 and bring in Zarate or Castaignos? Or will everything be about Milito? For sure, Castallazzi starts in goal (and that is fine with me), but will Chivu get some more time out? And what about Ranocchia? I just dont know. Tell you what, I think we will bust out the old GIPATI for this. If you can correctly guess CR’s starting lineup for the Coppa game tomorrow and you will be named the Grand Imperial Poobah of All Things Inter. It comes with a personalized certificate (suitable for framing) and a whole host of bragging rights.

I hope the boys take this seriously. I hope the players who have yet to see many minutes take this opportunity to prove themselves and, if asked to play, Zarate finally lives up to the hype. I am desperately disappointed that Forlan is proving so delicate. But, crying wont fix him so we just have to look ahead and hope that the B team will haul themselves up to A levels. Plus, I hope this means Branca will be bringing us a midfielder and a forward this winter (who, I dont know, but we need someone... good).

So lets go get that Coppa!