Inter v Lazio: Is Eight too Much to Ask?

Share All sharing options for: Inter v Lazio: Is Eight too Much to Ask? 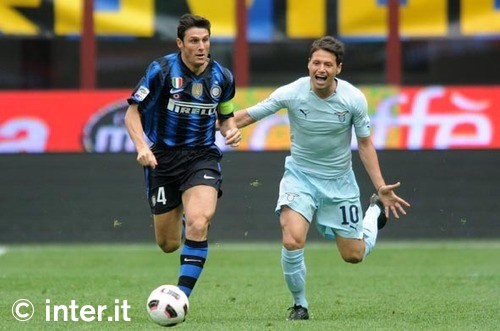 Ok. So we have done all this work, dragging ourselves up the table, but now we have hit a bit of a wall at fifth. If we can manage to beat Lazio, though, we can move up to fourth - one step closer to a coveted CL spot. Lazio are a tough opponent and, despite the relatively friendly atmosphere between the clubs, this will be a cagey match where any mistake will be punished. There is just no room for error on Sunday. But perfection is a big ask for a team that some think are already playing at the end of their ropes. After the derby win last week then midweek against Genoa, is an eighth win in a row just just a bridge too far for this squad? They are only human, after all (well, except Zanetti. He is clearly superhuman and beyond explanation.)

What: Inter v Lazio, the epic battle for Fourth Place
Where: Frosty Milan
When: Sunday, 8:45pm local time (11:45am pacific, 2:45pm eastern)
How to Watch: Live on RAI Internazionale, ESPN3 USA, Fox Soccer Channel, and FOX Deportes, or one of these channels. Or, you can find a stream (Rojadirecta, Ustream, and ATDHE.net).
Liveblog: Kirby is travelling but I bet MAD and I can work something out. Check back here 15 minutes before kickoff.

Inter has a pretty good home record against Lazio:

Inter hasn't lost this fixutre since an epic 3-5 smackdown in 1998 when the likes of Nedved and Mancini played for the Biancocelesti. Last year Inter beat Lazio 2-1 after a goal from Sneijder, another from Eto'o and a converted penalty from Zarate. And all that with 10 men (poor Julio Cesar was sent off in the aforementioned penalty). Once again, watch the video at your own risk. The Eto'o is sublime.

Lazio is one of those rare teams with a better away record than at home:

That said, they are not invulnerable. The stumbled a bit against Siena (or fell down a 4-0 flight of stairs), then they had to resort to injury time heroics to secure a win over Hellas Verona in the Coppa Italia. Still, they come to this game on a high note, after beating Atalanta last week 2-0. When you narrow it down to the top four teams, Lazio has a mixed record: they drew 2-2 against both Udinese and Milan, and lost 0-1 against Juve.

So ya, we definitely have a shot, but it will be hard.

Lazio dont seem to have much trouble scoring goals. Miroslav Klose has been in great form, scoring 9 goals in 17 games. Hernanes has also been doing well with four goals, while Cisse has been a bit of a bust with only one goal in 16 games. Like Inter, they have have a fair a few injured players. Yesterday, Rocchi was a maybe but he must have passed a fitness test as he is on his way to Milan. Brocchi, Canna, Kozak, Makinwa, and Mauri are all not so lucky and are still in the injury ward. To help make up the numbers, Lazio have just picked up a new Uruguayan striker, Emiliano Alfaro, but it doesn't look like he is coming to Milan. I guess he needs a little more time to settle in. 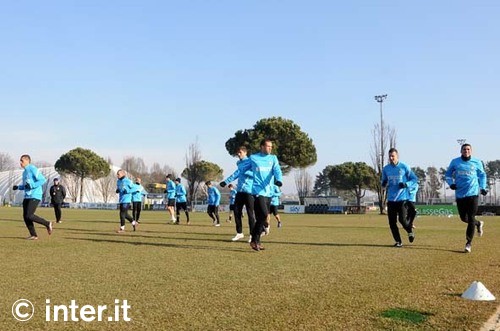 It looks like a cold, clear day in Milan.

Thiago Motta is out for yellow card accumulation. Coutinho, Stankovic and Forlan are injured. In the case of Forlan, I think it is just best to forget he is even on the roster. That way, we wont be disappointed when he cant play and it will be a real special treat if he ever does get well enough to string two games together. Sort of like finding $20 in the pocket of a coat you haven't worn for a while. Whatever was wrong with Chivu, he must be feeling better or he wouldn't have made the list. I think we have all seen how cautious CR is about injured players. Oh, and I almost forgot, everyone's favorite player, Muntari, is still out with the ACN (he is really starting to piss me off with his transfer shenanigans).

In terms of lineups, I think that we will go in a Derby sort of way (sans TM, of course) with:

Faraoni is a bit of a long shot, but CR says he wants to ease Sneijder back (so he doesn't re-injure himself) and with Coutinho out, I just dont know who else he would play. Maybe Poli but he also looked a bit winded after 75 minutes against Genoa. He may not have another game in him quite yet. But who knows. Ranieri is always surprising me. 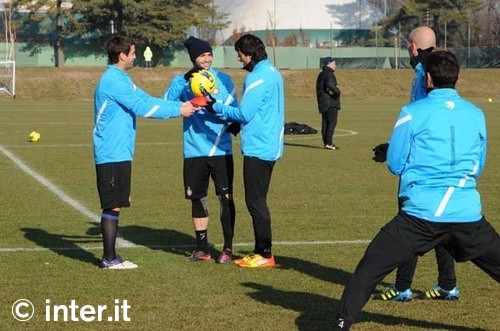 It's hard to say what is happening here but Chivu sure looks confused about something.

CR seems very determined about this game. In his presser today, he said that this game against Lazio will be much more difficult that the derby as Lazio is "a strong, dynamic side." (Anyone want to guess at whether that was an intentional dig at Milan or it just came out that way?) He went on to point out that Lazio have earned more points than any other team in the second half. Yikes.

A quick look at our scoring times verses theirs shows what Ranieri is worried about. Notice how they have only conceded seven goals in the second half. Inter, on the other hand, seems to loose a little concentration towards the end of the games, allowing twice as many goals in the second half as Lazio has. Of course, we have managed by making up for it with scoring more goals, but we cant always count on the attack to make up for the defense. 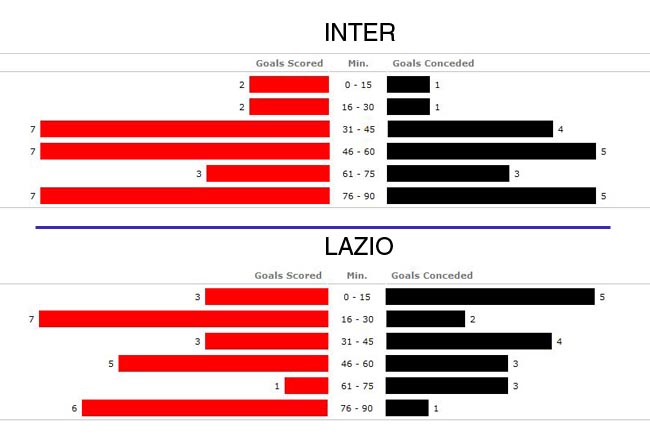 Ok. So we all said that the derby would be the big game - the real test as to whether this team had a real shot at something or if we would be spending our Thursdays next year playing obscure Eastern European teams in the Europa League. And we were right, we have to take points against the teams ahead of us if we want to move up the table. But it is relatively easy to get the squad worked up over a derby. Everyone knows they are important and everyone wants to do well. That is not the case with Lazio. These points are every bit as important as last week’s but there isn’t the hype around this game to keep everyone on their toes and the squad is that much more fatigued. That makes this game hard. These guys are human and eight wins in a row may just be a bit too much to ask, especially with an important quarter final against Napoli mid week.

This is our chance to make a meaningful move up the table. Hell, if Catania can stop Udinese, we could even go joint third. Third! Can you imagine?!? It makes me giddy just to think of it. I know we cant win every game, but I really really really want to win this one. I want to finally wash the acrid taste of mid-table out of our mouths, to put those wasted days behind us and to demonstrate to world that Inter is not quite over yet. Three points against Lazio tomorrow would send a clear message. Oh, and make me one happy camper.

So lets go get fourth.

I cant remember if I posted this already or not:

And because I have become obsessed with this (really, I cant stop watching it):