At This Point, It’s Not the Destination, It’s the Journey

Share All sharing options for: At This Point, It’s Not the Destination, It’s the Journey

Most of us have heard something close to that saying above, right? Despite Machiavelli’s princely mantra, the ends are just that, the ends, it’s the goal, the star in the sky that was wished on. "Man’s reach should always exceed his grasp," those who I consider to be my teachers always told me. "Work smarter, not harder, if you can. But sometimes there’s no escaping hard work" my pappy always said. By the way, if he ever heard me refer to him as "pappy" he would be boxing my ears right now – an all too familiar experience for me growing up, as I am sure none of you are surprised to learn.

It’ll be interesting to see. Those who are not new to these pages understand that I consider this game to be a contact sport – within the rules of course, despite the willingness of some players and refs to treat this game like it was basketball. I expect these players to be angry. I expect there to be a message sent each game that demands a certain level of respect. I expect to see players fighting, scratching and clawing for both their continued jobs and continued love from the supporters for next season. 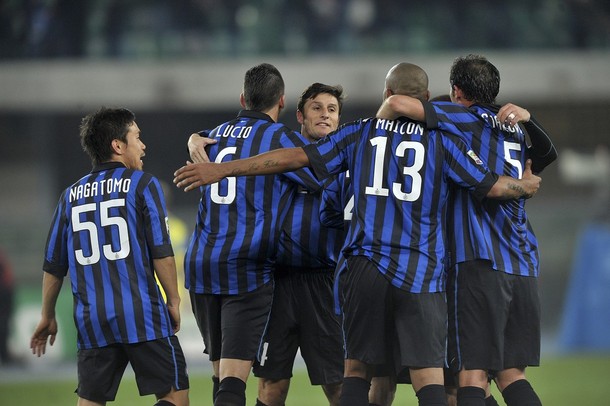 That doesn’t precisely translate into wins. Don’t get me wrong, wins would be fantastic, but we have to be realistic here. There are 4 teams ahead of us in the “race” for 3rd and the odds are slim that we get there and all four fall. Lazio, Udinese, Napoli and Roma all have to falter and we have to basically win out – or at least gain significant ground each game. With only 11 games left and this squad’s performance up until now, that might be too much to ask for.

So be it. That’s just how it is and we might as well get used to that idea here in March. For the first time in over a decade Inter will probably not be in the Big Money Tournament next season.

I can find a kind of peace in that acknowledgement. After all, what are my alternatives? I could rage, get my blood up and call them all shit and garbage and greedy… but I don’t really think that these players are any of that. I think that most of them honestly try very hard in training – as would any professional at their jobs - and that the worm turned this season. It happens to all the great teams. Change is the only constant – it’s an irony that I have lived and learned with all the sports I follow.

So what happens next? What do I do for the next 11 games? Do I ignore them because I don’t see the point in following a non-successful team? I have watched every game this season; do I now take a well deserved vacation from a job in which I receive no pay but plenty of dirty looks from my wife for ignoring the family an hour and a half every week? Do I now focus on my actual career, that thing that ensures that my family can eat, have shelter and heat?

No, I don’t think I’ll do any of that. I think I’ll continue to watch games. I’ll continue to critique players. I think that my anxiety – that excitement and nervousness that I love as my blood pressure rises in anticipation and involvement of a match – will lessen but I will still be curious to see who still has the fire on the field.

Those players who look like they have no character for these last 11 games? I would be happy, from some 10,000 miles away, to launch those players out the door myself with my size 12EEE "Wide Load" Steel Toe Shit Kickers™ applied accurately and with great force to the right buttock cheek of these individuals for free.