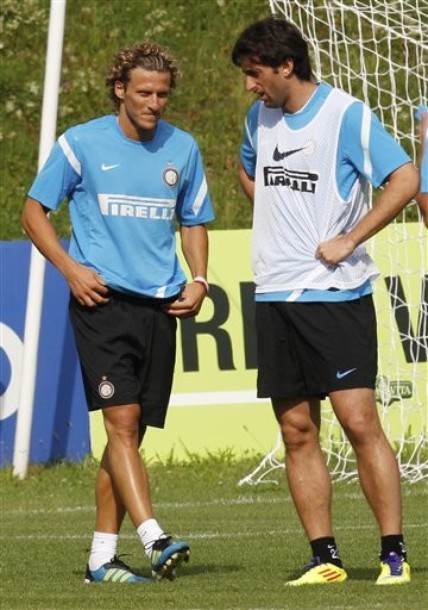 Nothing on this team reflects my ambivalence to the squad selection than these two players. On the one hand we have a legend for two Italian clubs, a Champions League winner, a scorer of 30+ goals for a season in perhaps the toughest major European league to score goals in, a World Club Cup Winner, a player who has proven how hard a worker he is to me personally as I saw him stay after practice and work out longer and harder on his trip to New England and an unquestioned tough guy who is rarely injured. On the other we have Diego Forlan who has proven absolutely nothing me – including the ability to hit the broadside of a barn on purpose with a football.

I may be selling Forlan short. But, I don’t have any confidence whatsoever that he can do anything worthwhile on the field. I certainly haven’t seen any evidence that he’s worth anything close to his outrageous wages. When he’s actually on the field – which isn’t very often – and he’s dribbling towards goal, all I can hope through gritted teeth and fingers splayed in front of my eyes is, “For the love of all that’s holy, please, please, please don’t shoot!”

It’s not promising that one of the people that the team brought in to “replace” Eto’o – and allow me to pause here for a hearty guffaw at the thought that Forlan can lick the boots of Eto’o – and I am praying that the man won’t shoot.

I know that there are several people who might be fans of his and if these words upset you or make you want to defend your hero and convince me of his loveable qualities, then please do so. I have been wrong about a player before (see also: Sneijder, Wesley).

But my point in writing this is not to rail against one Diego and pontificate about the other. Someone famous once said, “I am here to bury Caesar, not praise him.” And as Antony begged people to lend him their ears, I will just ask for a moment of your time to discuss why both Diegos, the good one and the bad one, are a poor choice for Inter going forward.

And I acknowledge that both scored on Sunday. Not only do I acknowledge it, I am thankful for it. But, like my thankfulness about the service that other, older players gave to us, I also understand that being a player for Inter – for any team – is a temp job, really. And I acknowledge that Milito’s case of the yips has probably gone for him and he looks fired up after scoring this weekend. He certainly has a better record this year than Pazzini, there’s no doubt about that. He’s probably got several very good games left in him if not seasons of good games.

Because things will change! Ironically, it’s the one constant of the Universe; everything will change. We, as a team and society, can force change, guide it and try to make the end product something we want… or we can passively await the change and desperately be forced to make compromises as choices shrink and drift away beyond our ability to decide what our team gets changed into.

As some long time viewers of this web page might have guessed, I am not in favor of our team doing anything passively. The way I see it, Pazza Inter should be taking the reins and driving the runaway stage, hopping from horse to horse not sitting in it gripping the door in terror. Yeah, you might fall and be trampled and run over by wagon wheels once or twice. But, you might also manage to find some good goddam horses.

And we need some good goddam horses. I like Diego Milito. And I loathe Diego Forlan. For all their honors, beauty and warts they are both great players. But they both need to go this summer. There was 1967, The Summer of Love. 2012 needs to be The Summer of Revolution. This needs to be a time when we change out the old for the new even if it hurts. Like ripping off a band-aid, it needs to be fast, it needs to be violent, it might need to be done through gritted teeth and it needs to be done soon.

I know how loved Milito is. I love him. I really do. I wouldn’t take the time to find Rocky clips on Youtube to cheese off Maryam if there wasn’t some affection there for The Prince. But he has to go. We can’t rely on him when he can be gone at any minute. It sounds harsh and heartless but it’s true. At some point soon, he’s going to be nostalgic for Argentina, or Genova, or he’s just not going to want the headache of being in the pressure cooker anymore, or his touch might fail him again, or fate catches up with him when he finally gets a serious injury. I love Diego Milito. He will always have that special place in my mind and memory that all players who win Championships have in all our thoughts. But it’s time to let him go. Now.

Before I regret writing those words and change them. 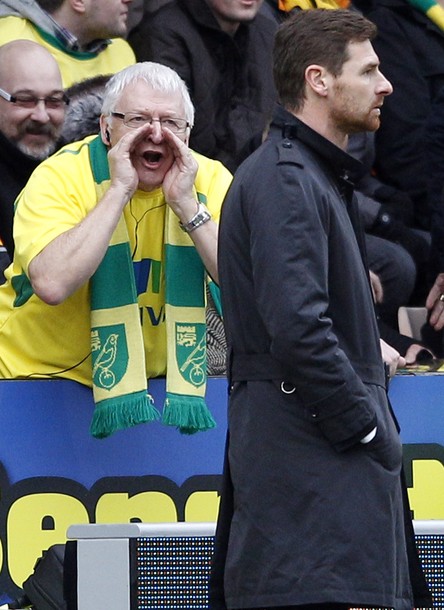 As I said, I don’t favor Inter doing anything passively. The team needs to find solutions to the aging player problem. If Inter are serious about bringing Villas-Boas on board, fine. I don’t really have any real objection to his arrival. He used to work for us, before being Chelsea’s sloppy seconds; he was our sloppy seconds donated to Porto. So he has some history here, if that means anything. He might even still have some affection, still.

But the team needs to support him. The team needs to understand what happened at Chelsea. The English, and one shouldn’t be surprised by this, didn’t understand him and what he wanted to do. They thought that they were getting Almost Mourinho. They desperately wanted Anther Mourinho, because they realized how stupid they were to let The Real Mourinho go.

They wanted The Fixer. The guy who comes into a vet team, works his psycha-hoodoo on the players, adapts his 433 and everyone’s strength is the strength of ten because their hearts are pure. But Villas-Boas isn’t Tennyson nor Sir Galahad. And he also isn’t Mourinho. Mourinho wanted to win today, wanted to compete today and is willing to compromise strategy/formation to win today.

I think Vialls-Boas is, in the extremely short time that I have actually dedicated myself to looking at his history as a coach, a builder. I think he wants to build a team from the ground up. It looks to me like Villas-Boas tried to set the strategy at Chelsea now so that he could go out to get players to make it work later and then plug in as acquired. It also looks like he demanded too much of his players. He wanted aging, rich, egomaniac, proven superstars to sacrifice for the team the same way his nobodies at Porto were willing to do.

Now I could be completely wrong on this and I welcome any enlightenment but it really looks to me like Villas-Boas was setting Chelsea up for a kind of revolution of their own this coming summer and the players under him staged a coup. If I were uncharitable, I would say that those players were desperate to hold onto their spots on the team and that could see that the writing was on the wall. If I were very charitable, I would say that those players thought that it was best for Chelsea that the team’s best, if aging players try to work through the mess and rescue the season.

I think that’s exactly what happened at Inter this past month. I think the team’s best if aging players tried to work through the mess. I don’t think it worked for us. I guess the jury is still out on Chelsea, though. If Villas-Boas is the man to take over and the decision is already made, I hope that if he has a plan from the beginning. I don’t care what the plan is, as long as he has one and he follows it. I don’t think it would hurt if he had in that plan some suggestions on young, good players either.

Because I think that we will have at least 2 spots opening up in the forward line soon.