The high and low lights of the most recent edition of the Derby d'Italia where Juventus pull a home win against visitors, Inter with a final score of 3-1.

The weeks preceding the Derby d'Italia was filled with a multitude of drama-infused headlines with not only one but two failed swap attempts (first Vucinic, then reports of Quagliarella) between Inter's most reviled rival, Juventus, over Nerazzurri midfielder, Fredy Guarin. According to reports, approximately a week and a half ago, the Colombian midfielder tried to force a move to the Torino based club much to the dismay and demonstrative protests of Inter's Curva Nord. The rumored swaps fell through in the end, much to the relief of most Interisti, but it only served to fuel an already heated rivalry between the two storied clubs.

While both Inter and Juventus are two of the biggest clubs in Italy if not Europe, their respective seasons are at opposite ends of the spectrum. The Nerazzurri started their season well, stoking the fires of hope within most supporters to dream of a return to Champions League glory. Although the black and blue side started well, their recent form has fizzled of late. Meanwhile, Juventus albeit crashing out of the Champions League and the Coppa Italia squashing any talks of the treble they had almost guaranteed at the beginning of the season to their fans, were sitting in first place five places ahead of the sixth placed Inter side. The disparity between both sides was 23 points at the start of the match and purportedly was the largest gap in points between the two.

For Inter, the game represented a chance to show that heart and grit were still key characteristics to the Nerazzurri side and although a return to the Champions League seemed unlikely, if the players went out and put it all out on the line, most Interisti would at least feel pride that the players gave it their all.

Could Inter overcome adversity to once again beat Juventus at their home stadium? Would the inclusion of Milito and Icardi in the squad give the Nerazzurri the attacking boost they need to beat their rivals in what would most likely be a hostile environment?

Who would leave tonight's Derby d'Italia as the victors, an underdog Inter side playing away or would Juventus use their home field advantage? Also, would refereeing be an issue as Inter had yet to be awarded a penalty in league play even though countless calls were deemed questionable by most match observers?

One thing was certain, regardless of the outcome, a Derby d'Italia raises the level of passion and emotion that only La Scala could rival in such dramatic fashion on the stage of Italian calcio.

Match Summary:
Inter's starting formation reverted back to a Mazzarri favorite of 3-5-1-1 with Handanovic in goal; a three man backline of Campagnaro, Rolando, and Juan Jesus; a five man midfield of Jonathan, Kovacic, Kuzmanovic, Taider, and Nagatomo; with Alvarez slightly behind Palacio in attack.

Tensions ran high as prior to the match, Juventus' supporters were reportedly throwing rocks and eggs at the Inter bus. Both sides seemed to have carried this same high level of emotion onto the field as both teams came out firing. Welcome to the Derby D'Italia.

In the fourth minute, Inter keeper Handanovic saved two amazing shots on target to keep the score line at nil-nil in the initial moments of the match.

Inter seemed to react well after this surge of attack on their defense and carefully carried out their own attack as they possessed the ball but could not find Palacio in the box.

The next few minutes were a back and forth in terms of ball possession and attack, as Inter managed to keep the home side off the score sheet.

The pace was quick and fast as both sides pressed hard and aggressively to try and open up scoring.

Although Inter had dealt with the home side's assaulting attack, in the 15th minute the Nerazzurri defense was penetrated as former Lazio man, Lichtsteiner, headed a difficult ball for goal from superb service via Pirlo.

In the initial moments of the first half, Inter were trying to keep pace with the league leaders but after the home side scored, Inter began to play deeper into their half and relied on a counter attack with over the top balls to a lone striker in Palacio.

In the 32nd minute, the Inter defense headed out a dangerous ball from a corner. The subsequent corner kick went out of bounds and Inter retained possession which led to a blazing run by Nagatomo who found Kuzmanovic but was then turned over to a Juvenuts counter attack.

Inter began to regain more ball possession but could not get through an oppressive bianconeri press. As the first period progressed, Inter were demonstrating a greater difficulty in defending their goal from the home side.

In the 41st minute, Inter had a breakaway counter attack and Kovacic found Palacio who could not find the back of the net to test back up keeper Storari. (Buffon had been red-carded in the previous round leaving him unavailable for the match).

After staving off an almost relentless attack from Juventus, the half drew to a close with Inter only trailing the home side by a score of 1-0. 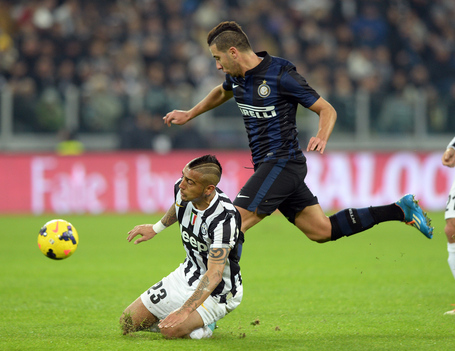 The second half started as the first half ended with Juventus in possession of the ball and offensive attack. The home side capitalized on their opportunities with goals in the 2nd and 11th minutes (Chiellini and Vidal respectively) and it looked like it was done and dusted midway into the second half.

Mazzarri made three vital substitutes in the 10th, 13th and 21st minutes with Milito, D'Ambrosio, and Botta entering the game which revitalized the flailing Inter side and brought a flicker of hope within the hearts of Interisti.

Rolando scored in the 27th minute bringing the Nerazzurri to within two goals and the goal served to liven up the away side and bolster their confidence as they began to possess the ball and attack, pushing the home side further into their third of the pitch.

Unfortunately, Inter's resurgence of intensity and play in the last 20 minutes of the match was too late and the Nerazzurri fell to the home side by a final score of 3-1.

Despite the Inter loss to a stronger Juventus side, there may be a few positives to focus on and possibly build upon in the future.

Guarin's absence would make way for Kovacic in the starting XI and it was another opportunity to evaluate how he played alongside Argentine, Alvarez. While many may have hoped that the young Croatian international would be playing side by side with Alvarez, he was a bit deeper in the midfield which may have been a tactical move by Mazzarri to compensate for Cambiasso's absence (due to injury).

Hernanes was not dressed but did travel with the team due to reports that the money had yet to be officially transferred, hence his absence from the match. He will certainly prove to be an important player in the future to keep the Nerazzurri's hopes for Europe alive.

Hernanes is a talented midfielder who had demonstrated at Lazio a wide array of abilities from deep lying midfield defensive and holding qualities but also an ability to attack. He seemed to be the type of player that could possibly link up the midfield with the attack as the well had proverbially run dry for Inter in the past few matches, where at one time the Nerazzurri had proudly claimed to have had the best attack in Serie A (despite no penalties awarded in league play).

Jonathan has been less than divine of late and with the acquisition of D'Ambrosio, it opens up options on the wings, as Mazzarri will surely choose the player best in form.

Speaking of players in form, starting center back and goal scorer Rolando, earned a starting spot when he showed Mazzarri that he could play consistently as the center of the defensive triad, when injuries to Samuel and inconsistent performances of Ranocchia led to the opportunity.

Since Samuel has regained full fitness, should he start over Rolando? While Samuel is older, he still reads the ball extremely well and is still one of the best center backs around as evidenced by the interest by Fiorentina in the January transfer market. Having more than one center back to choose from may be a luxury that Mazzarri is willing to take as injuries have almost crippled the options the Inter boss has had to choose from.

Inter continue to keep their 6th place position in league standings but their hopes for European competition are alive. The Nerazzurri have much to improve on, unfortunately, in all areas of the pitch but considering the way they played in the final 20 minutes of the match against the league leaders, there is some hope to draw from, even if only a faint glimmer.

Man of the Match: Samir Handanovic
[Note: While there is very little, if any, to celebrate from this loss, if it were not for an amazing performance by the Slovenian keeper, the score would have surely been one to have depressed even the most optimistic of Interisti such as myself].