Statistical analysis of the double face off against Wolfsburg

Another loss for the Nerazzurri who have been eliminated from the Europa League by a stronger and more determined side.

Share All sharing options for: Statistical analysis of the double face off against Wolfsburg

There is absolutely no need to tell again how disappointing is this result for the team and the supporters, so I'll just start with the analysis of this painful Europa League round.

32 total shots, 2 goal
If in the away leg the Germans showed their supremacy on the field, with 17 total shots (10 on target), in the home one it was Inter the team that put more pressure on the opponents defense, trying to score 20 times. Overall, the Nerazzurri shot the ball 32 times, 9 on target, scoring only 2 goals. These numbers are pitiless by themselves, but I'll try to make them even worse: of all the shots made, only 28% of them were on goal and of this 28%, only the 22% were goals. Scoring goals is the purpose of the game of football, so if you have an horrible 8% conversion rate in two games, you are clearly being bad at this game.

Too many key passes failed
Since Mancini's arrival Inter have often been the team with the ball for most of the time and also the team that passed the ball more and more accurately too. Against Wolfsburg, if we watch at the two games combined, it was the same story. The Germans passed the ball 1,020 times in two matches, while Inter did it 1,070 times and the Nerazzurri had a 83% success rate against Wolfsburg's 81%. Here is an image that shows the passes made by our 4 midfielders (Kovacic, Guarin, Medel and Hernanes) in the home match.

Quick legend: green arrow = completed passes; red arrow = failed passes; yellow arrow = key passes; blu arrow = assists.
While it's a good sign that in the confusion of the picture the predominant color is green, it's obvious the fact that when our midfielders - aka the ones that should create goal chances - reach the edge of the box they prefer passing the ball on the wings rather then into the box, and of the few times they did that, the passes were not accurate as they should.

I would like to show you another picture, because, you know, a picture is worth a thousand words and in that case these evidences illustrate exactly what the problem of the team is. 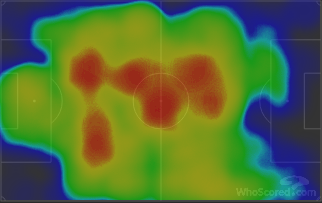 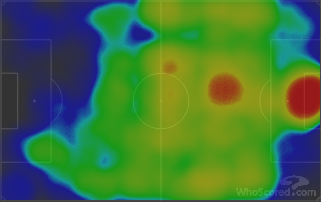 The left image shows the heatmap of the away match.It's obvious Inter suffered a lot in that game and the big red area around the place occupied by the keeper point out just that. The right one is better looking and shows that it were the Nerazzurri that controlled the home game and kept the ball for most of the time, but the red areas are more focused in our defensive-third rather in the attacking one, making all the ball possession an end in itself.
To complete the analysis of this two heatmaps it must be added that in the first match Ranocchia and Juan Jesus were respectively the 2nd and 5th player with most touches of the team (64 Rano, 58 JJ) and in the second match, the one that Inter should have won, at least for pride, they were 4th and 2nd in that category (81 Rano, 93 JJ). You can't win a match if your defenders are the players with the ball on their feet for most of the time, even if they are very accurate with their passing the smallest mistake could cost you the game - and it has happened too many times lately.

All credit to WhoScored.com and Squawka.com for all the pictures and stats.